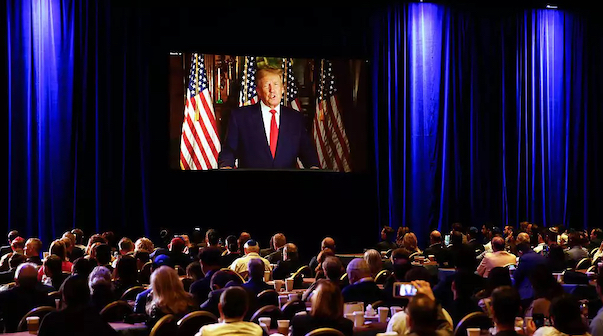 One of the first Hebrew songs I learned was David Melech Yisrael. In the Jewish faith, a king has to be descended from King David and one of the two Mashiachs (anointed one in Hebrew, changed into a different concept, and called a messiah by other faiths). David Melech Yisrael may refer to the belief that the Mashiach ben David will rule the world in the era of peace.

Why all this theology? Because I am getting the feeling that Donald Trump, President of the U.S., believes he is Donald Melech Yisrael, or at the very least, an ordained rabbi.

Former President Donald Trump once again hailed his work to support Israel, also lamenting once again that Jewish people in America do not do enough to do the same.

Trump gave a speech before the Republican Jewish Coalition over the weekend, during which he bragged that he was “the greatest friend Israel ever had in the White House.” His speech was laden with jabs at President Joe Biden — as he ripped on his successor’s overall performance in office, claimed Israel’s alliance with the U.S. is “not even strong by a little bit” on Biden’s watch, and also claimed Biden “betrayed Israel and the Jewish community.”

IMHO both of these comments are true. But more importantly, they are political and open for anyone to discuss.

It is excellent when politicians recognize that Israel is the Jewish State and the eternal homeland of the Jewish people. But the relationship between Jews and Israel is not his business to discuss publicly. That is in the realm of Rabbis. People who have studied the traditional scripture and the oral law (which has been written down for over 2k years). Before they receive semikha (ordination), they learn the text, how to interpret an ancient text to answer modern questions, and most importantly, how to teach the elements of their faith.

Personally, I am ecstatic that Donald Trump is a massive supporter of the Jews of America and Israel, our eternal homeland. But until he earns semikha, he should avoid issues best handled by a Rabbi, including the relationship between the Jewish people and the homeland given to them by God.