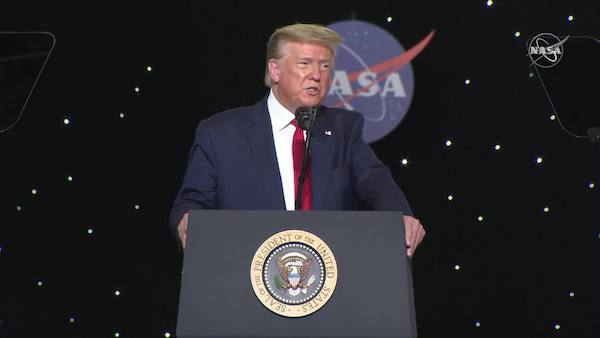 Maybe it was the riot that attacked the CNN building Friday, or possibly he’s been drunk again like he was on New Year’s eve a few years back, because on Saturday evening CNN’s Don Lemon lied again. He claimed that President Trump hadn’t spoken about the horrible riots across the country that saw groups such as ANTIFA exploiting the peaceful protests about the killing of George Floyd, by a bad cop in Minneapolis.

.@CNN charlatan @DonLemon just flat out LIED to viewers, claiming Trump hasn't said anything in advance of tonight's riots: "And so, no appeal from the POTUS for calm. We are waiting for some leadership instead of division. And so far, silence." pic.twitter.com/YPKzzykX08

Maybe Lemon was sleeping at around 5:20 when President Trump started his speech congratulating the first launch of American astronauts from U.S. Territory in ten years, with words about the death of George Floyd and the riots. (video and transcript below). Or earlier in the day before he left for Florida when he said that the violence must stop so America can honor the memory of George Floyd.

President @realDonaldTrump says violence must stop so Americans can honor the memory of #GeorgeFloyd pic.twitter.com/fXdVlAzaEE

One could understand Lemon’s anger about the riots, CNN headquarters was attacked by rioters the night before.  And on Friday and Saturday evenings, we saw the riots spread across the country and grow more violent.

Perhaps he forgot to pay his cable TV bill and it was shut off. If he couldn’t watch TV it would be an excuse for his lie that the president did say anything.  But Don Lemon’s words about President Trump were as divisive as they were false.

There’s unrest in our cities. And so far, no appeal from the president of the United States for calm. We are waiting for some leadership instead of division and so far, silence.

And they wonder why CNN is called fake news.

Below is the video and transcript of President Trump’s words spoken just a few hours before CNN’s Don Lemon lied and said the President was silent.

Before going further on this exciting day for all America in space, I want to say a few words about the situation in Minnesota.  The death of George Floyd on the streets of Minneapolis was a grave tragedy.  It should never have happened.  It has filled Americans all over the country with horror, anger, and grief.

Yesterday, I spoke to George’s family and expressed the sorrow of our entire nation for their loss.  I stand before you as a friend and ally to every American seeking justice and peace.  And I stand before you in firm opposition to anyone exploiting this tragedy to loot, rob, attack, and menace.  Healing, not hatred; justice, not chaos are the mission at hand.  (Applause.)

The police officers involved in this incident have been fired from their jobs.  One officer has already been arrested and charged with murder.  State and federal authorities are carrying out an investigation to see what further charges may be warranted, including against, sadly, the other three.

In addition, my administration has opened a civil rights investigation, and I have asked the Attorney General and the Justice Department to expedite it.

I understand the pain that people are feeling.  We support the right of peaceful protesters, and we hear their pleas.  But what we are now seeing on the streets of our cities has nothing to do with justice or with peace.

The memory of George Floyd is being dishonored by rioters, looters, and anarchists.  The violence and vandalism is being led by Antifa and other radical left-wing groups who are terrorizing the innocent, destroying jobs, hurting businesses, and burning down buildings.

The main victims of this horrible, horrible situations are the citizens who live in these once lovely communities.  The mobs are devastating the life’s work of good people and destroying their dreams.  Right now, America needs creation, not destruction; cooperation, not contempt; security, not anarchy.  And there will be no anarchy.  Civilization must be cherished, defended, and protected.  The voices of law-abiding citizens must be heard, and heard very loudly.

We cannot and must not allow a small group of criminals and vandals to wreck our cities and lay waste to our communities.  We must defend the rights of every citizen to live without violence, prejudice, or fear.

We support the overwhelming majority of police officers who are incredible in every way and devoted public servants.  They keep our cities safe, protect our communities from gangs and drugs, and risk their own lives for us every day.

No one is more upset than fellow law enforcement officers by the small handful who fail to abide by their oath to serve and protect.  My administration will stop mob violence and will stop it cold.

It does not serve the interests of justice or any citizen of any race, color, or creed for the government to give into anarchy, abandon police precincts, or allow communities to be burned to the ground.  It won’t happen.

Those making excuses or justifications for violence are not helping the downtrodden, but delivering new anguish and new pain.

From day one of my administration, we have made it a top priority to build up distressed communities and revitalize our crumbling inner cities.

We fought hard with Senator Tim Scott and many others to create Opportunity Zones, helping to draw a surge of new investment to the places in our country that need it most.  We must all work together as a society to expand opportunity and to create a future of greater dignity and promise for all of our people.  We must forge a partnership with community leaders, local law enforcement, and the faith community to restore hope.

The leadership of the National Guard and the Department of Justice are now in close communication with state and city officials in Minnesota.  And we’re coordinating our efforts with local law enforcement all across our nation.

In America, justice is never achieved at the hands of an angry mob.  I will not allow angry mobs to dominate.  It won’t happen.  It is essential that we protect the crown jewel of American democracy: the rule of law and our independent system of justice.  Every citizen in every community has the right to be safe in their workplace, safe in their homes, and safe in our city streets.

This is the sacred right of all Americans that I am totally determined to defend and will defend.  My administration will always stand against violence, mayhem, and disorder.

We will stand with the family of George Floyd with the peaceful protesters and with every law-abiding citizen who wants decency, civility, safety, and security.

We are working toward a more just society, but that means building up, not tearing down; joining hands, not hurling fists; standing in solidarity, not surrendering to hostility.