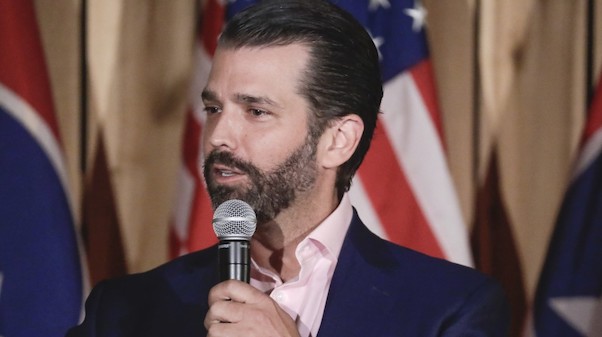 The Right, so we are told, is riddled with violent sociopaths and domestic terrorists. Inexplicably, however, the violence (both real and threatened) keeps coming from the political left. Don Jr. Garamendi

From the petty stuff like knocking a MAGA hat off someone’s head or yelling at strangers to the more dangerous things like singling out Nick Sandmann for a national-level media beat-down, to actual dangerous acts of violence from Antifa or rank-and-file leftists who have firebombed ICE detention centers, fired shots into government buildings and attempted to murder elected officials at baseball practice.

The Trump family has been particularly targeted, including Anthrax scares delivered to all of their family homes, some with young children present.

And now we hear more of the same from an elected official? Way to ‘raise’ the level of that public discourse, guy.

Donald Trump Jr. called on a Democratic representative to apologize for threatening him over a comment he made about the coronavirus.

Rep. John Garamendi, a California Democrat, said on Friday there would be “a serious altercation” if the president’s eldest son repeated his claim that Democrats secretly hope the coronavirus outbreak will do damage to President Trump’s reelection bid.

“The outrageous remarks from Congressman Garamendi were beyond the pale and should be universally condemned by Republicans and Democrats alike,” Andrew Surabian, a spokesman for Trump Jr. told the Washington Examiner on Friday when asked for a response.

“By threatening Don Jr. with physical violence on national TV, Congressman Garamendi made clear to everyone watching that he is better suited to represent Antifa than the people of California’s 3rd Congressional District,” Surabian said. “He should apologize immediately.” — Source: WashingtonExaminer

Nah! The Democratic Party have the majority in the House, Garamendi will skate like so many other Democrats.

Cross Posted with The Clash