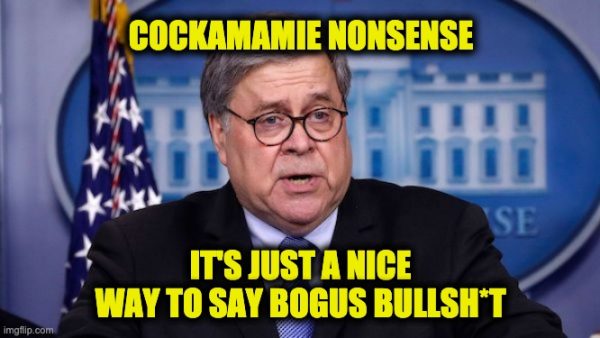 Earlier this week, Politico wrote that the department was seeking new “emergency powers” for itself that would “suspend” certain constitutional rights in criminal matters. “The Justice Department has quietly asked Congress for the ability to ask chief judges to detain people indefinitely without trial during emergencies” If true, that would have been a scary request. Still, like much of what comes out of the MSM, the report was totally bogus. DOJ emergency powers

Barr spoke to Fox News and said of the suggestion that the DOJ was looking for the power to suspend some constitutional rights in criminal matters and detain people indefinitely without trial, “It’s cockamamie nonsense.”

Barr said Thursday the Department of Justice never proposed any expansion of its own power but rather was asked by lawmakers on Capitol Hill for suggestions about giving judges more flexibility to adjust schedules while many courts are closing or scaling back operations during the coronavirus crisis.

“The whole legal system is rife with deadlines,” Barr said. “You have so many days to appeal a decision and so on.”

However, many of these schedules have now been thrown into limbo as the nation grapples with Covid-19 emergency.

Main Justice suggested “augmenting the power of the chief judge in each district to come up with a consistent approach… individual judges will decide this and not the Department of Justice,” Barr told Fox News.

Barr’s explanation was consistent with the tweets from his SPOX Kerry Kupec sent the day the Politico report was published.

Bottom line: The proposed legislative text confers powers upon judges. It does not confer new powers upon the executive branch. These provisions are designed to empower the courts to ensure the fair and effective administration of justice.

Ever since Trump took office, liberals and the mainstream media warned that he was a tyrant that would try and take away our constitutional rights. Those warnings were totally bogus, and this report about the DOJ trying to suspend the constitutional rights of criminals was just another example of the slanted media trying to turn public opinion against this President.