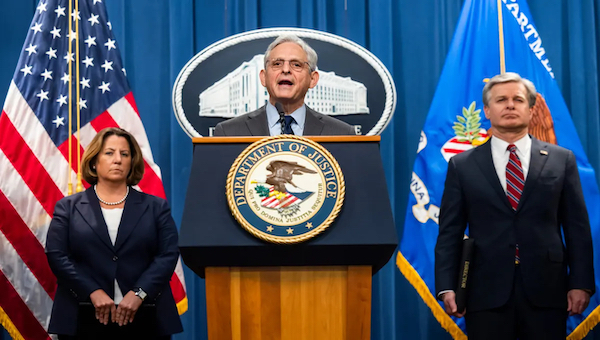 In 2016, the Democratic Party’s nominee for president, Hillary Clinton, had an F.B.I. investigation because she was storing classified information on her private server for the convenience of reading her classified emails on a smartphone. Details of the investigation came out throughout the campaign, resulting in former F.B.I. Director James Comey’s July 2016 determination not to pursue charges and an Oct. 2016 surprise that he was reopening the matter.

Determined to ensure that her opponent, then-candidate Donald Trump, would not be without an investigation of his own, the Clinton campaign and the Democratic National Committee sought to frame him as a Russian agent who had helped Moscow hack the D.N.C. and put the emails onto Wikileaks. It resulted in a top-secret F.B.I. investigation and FISA warrants that all carried over after the 2016 election when Trump won and into his administration, ultimately resulting in Special Counsel Robert Mueller being appointed to investigate—severely hampering the Trump presidency.

Mueller found no Trump campaign conspiracy with Russia to hack the D.N.C. and give the emails to Wikileaks. According to Mueller’s final report to the Attorney General, “the evidence was insufficient to charge that any member of the Trump Campaign conspired or coordinated with representatives of the Russian government to interfere in the 2016 election.”

The report added, “In particular, the Office did not find evidence likely to prove beyond a reasonable doubt that Campaign officials such as Paul Manafort, George Papadopoulos, and Carter Page acted as agents of the Russian government — or at its direction, control or request — during the relevant period.”

As a result, in 2020, outgoing Attorney General William Barr appointed Special Counsel John Durham to investigate the legal predicate for that investigation, which he says wasn’t there. That investigation continues to this day but has yielded no convictions as it fights out cases in Democratic-friendly courts and juries in the Washington, D.C., area. The American people and Congress await Durham’s final report.

But the political investigations would not end there. Two impeachments and a January 6 committee later, now the past two presidents, including former President Donald Trump and current President Joe Biden, have similarly had special counsels, Jack Smith and Robert Hur, appointed over the handling of classified documents in 2022 and 2023, both for papers each of them took when leaving the White House in 2021 and 2017 in Biden’s case when he was the outgoing Vice President. The F.B.I. even raided Trump’s Mar-a-Lago estate in Palm Beach, Fla.

Garland stated, “Based on recent developments, including the former President’s announcement that he is a candidate for President in the next election, and the sitting President’s stated intention to be a candidate as well, I have concluded that it is in the public interest to appoint a Special Counsel.” Here, Garland admitted that the justification for the special counsel was political: Trump and Biden are running against each other in the next election.

For a special counsel to be appointed, according to 28 C.F.R. 600.1, the Attorney General must determine “that [a] criminal investigation of a person or matter is warranted and… investigation or prosecution of that person or matter by a United States Attorney’s Office or litigating Division of the Department of Justice would present a conflict of interest for the Department or other extraordinary circumstances….”

Biden has one, too, since Garland says he cannot investigate his boss, either.

Both Trump and Biden are presumed presidential candidates in 2024. But the outcome might very well be determined by how all of these investigations turn out both legally and in the public eye, calling into question the irreversible politicization of the Justice Department that appears to have begun in 2016 but whose roots go back much further to the F.B.I.’s roots under J. Edgar Hoover, all to find enemies of the state.

A couple of world wars and a red scare or two later, to win the Cold War, the F.B.I. and U.S. intelligence agencies infiltrated and surveilled political organizations, anti-war groups, and civil rights groups all throughout the 1960s and 1970s, resulting in Sen. Frank Church’s select committee to investigate, and the advent of the modern Foreign Intelligence Surveillance Act (FISA), which was supposed to rein in the practice but instead has provided a rubber stamp legal basis for continuing the surveillance via the top secret FISA court.

After 9/11, these powers were expanded via the U.S. Patriot Act and other executive orders, all in the name of fighting international terrorism, but whose means included surveilling phone records of tens of millions of American citizens as well as their social media profiles, revealed thanks to former National Security Agency contractor Edward Snowden and journalist Glenn Greenwald.

It was FISA that was used for the fraudulent Russiagate investigation. And now the nation’s state secrets laws are being used against Trump, Biden, and Clinton before them. Ultimately, it’s a bid for one-party control, except this party is unelected. It’s a top-secret party that picks winners and losers in American politics.

At the end of the day, it’s either going to be Republicans and Democrats running this country and the two-party system is preserved, or it’s going to be whatever one-party system is now emerging from these investigations that control or attempt to control even the sitting president, who the Justice Department does not even have the Article II power to prosecute.

What it looks like is blackmail, with Clinton, Trump, and Biden all being hit with top secret investigations and “a shame if this were to get out to the public” as a means of garnering concessions, perhaps to preserve more state secrets and/or to carry on whatever proxy wars overseas against Russia, China, and Iran that are fashionable at the time. It’s a permanent state, and it doesn’t want to be bothered by presidents with different agendas, particularly foreign policy.

Bipartisan majorities in Congress should no longer tolerate this abuse of power. After the Bill Clinton impeachment, Congress let the Independent Counsel statute lapse. Now that there are three special counsels, all in defiance of the Article II unitary executive, this gives Congress a chance to look at this with eyes wide open.

Simply put, this is no way to choose a president. And it is no way to run a country. Now there are three active special counsels, all investigating related top secret matters of the top presidential candidates, perhaps to ensure they don’t run again. These investigations impacted 2016 and 2020, and now they will impact 2024. We are a constitutional republic ruled by the consent of the governed, not the consent of intelligence agencies. Yet what is occurring now is a threat to the Constitution, both political parties, and faith in our elections.