Why Did DNC Force FBI To Use A Report They Paid For In Hacking Investigation? 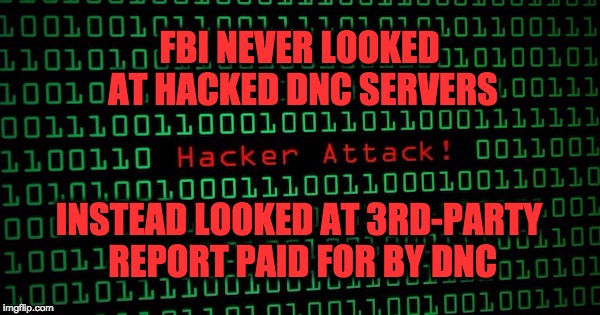 On Wednesday, the DNC tried to throw the FBI under the bus by saying that neither the FBI nor any other intelligence agency ever did an independent assessment of the organization’s breached servers. Instead, they alleged, the FBI relied exclusively on information from private digital forensics company Crowdstrike. While essentially true, the Democratic Party left out one very important piece of information…the DNC wouldn’t allow the FBI to look a their servers for the hacking investigation, instead forced them to use the Crowdstrike report paid for by the Party.

“The FBI repeatedly stressed to DNC officials the necessity of obtaining direct access to servers and data, only to be rebuffed until well after the initial compromise had been mitigated.”

The FBI agreed did substantiate that it relied on data from Crowdstrike in their investigation, but they blamed the Party for not looking at the servers themselves, according to the FBI official:

Wired asked the Party why the two accounts differed, but their response was to send the Magazine to the Buzzfeed article referenced above.

The Crowdstrike report was commissioned by the Democratic party, which raises some questions, like their initial report was in June way before the election which calls into the report into the veracity of the information, Even before the Democrats were using the Russian hack story in an attempt to damage the nascent Trump presidency, they were using it as a tool to deflect from the Clinton scandals before the hacking and the hacked emails. Was the report commissioned purely for campaign purposes? Was the report done independent of DNC input, or did members of the party and the campaign direct Crowdstrike toward the Russians?  If everything was above board—well why didn’t the DNC allow the government intelligence sources to look at their server. The only other explanation is it had more evidence of Hillary Clinton’s criminal activities.

I am not disparaging Crowdstrike’s third-party information, but I would feel more comfortable independent U.S. government intelligence sources examined the servers themselves, as there would be a greater chance our intelligence sources would not be beholden to the Democrats. Well—maybe not the FBI–we know how they handled Hillary’s email.