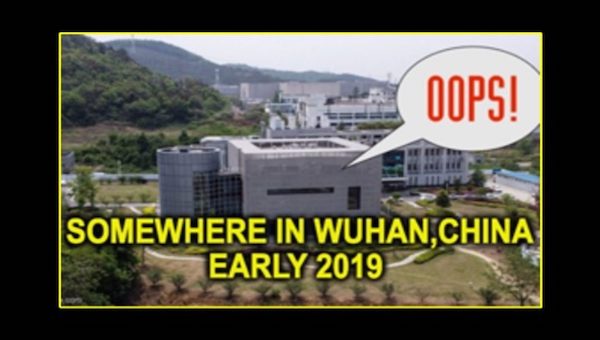 Remember how little Lord Fauci ducked and weaved on the questions of lab-leak origin, insisting that the Wuhan China virus was of purely natural origin? His reactions to anyone who challenged his natural origins claim ranged from arrogant patronizing to righteous indignation or even surly contempt. DNA evidence Wuhan lab leak

The lab leak theory is no longer considered the ‘conspiracy theory’ Fauci assured us it was. Because it has replaced natural origin as the ‘more plausible’ explanation, many of his earlier assertions of natural sources are falling flat.

A new document leak may have finally bridged the connection between the virus and the Wuhan lab.

In the months leading up to the exposure, the Wuhan lab was studying a strain of virus from bats in Laos, which is about a thousand miles away.

US government documents, released under Freedom of Information, suggest the bat origin and the lab escape stories might not be competing theories after all – in fact, they may both be true.

In September, scientists discovered Banal-52, a coronavirus found in Lao bats, which shares 96.8 percent of its genome with Sars-Cov-2.

…That puzzle might now have been solved, as leaked emails between EcoHealth Alliance and US government funders reveal viral samples from Lao bats were being collected and sent for study in the Wuhan Institute of Virology.

With a similarity like that, one scientist proposed two routes of jumping to the human population. One by a researcher getting infected while collecting bats in the field, and the other by an infection at the lab that escaped into the wider world.

The fact that the ChiComs scrubbed all their records of this virus and some other very similar bat viruses do nothing to bolster their claims of innocence.

And of course, there is the small matter of the telltale DNA sequence found in the edited genes but it is not naturally occurring in nature.

Does the name EcoHealth Alliance ring a bell? It should; that’s the group Fauci has been on the hot seat for with Gain-Of-Function funding authorization. They have been playing God with viral DNA, and it sure seems like everyone except those with something to lose would classify these experiments as ‘gain of function.’

Another leaked document revealed in September by Drastic, a group of open-source data analysts, revealed the head of EcoHealth Alliance, Dr Peter Daszak, had pitched to the US government for funding to artificially insert cleavage sites into Sars-like coronaviruses collected in the field and studied in Wuhan.

Dr Peter Daszak’s 2018 request for $14.2 million for the viral manipulation work was turned down over fears of the danger such alterations could pose.-

This discovery might actually give us a backdoor into the information that China has been trying to suppress.

If EcoHealth has been involved in the research, they may have the information we need to really dig into questions of the origins and come up with some answers.