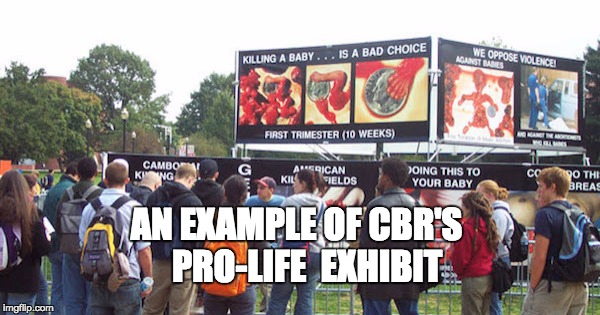 Once again our universities are coddling students of the snowflake generation. Campus Reform is reporting that California State University in San Marcos is warning students that an “anti-abortion” display will be present on campus next week, pledging resources to help those who find it “disturbing and offensive.” This shows how low society has gotten. The act of killing babies in the womb should be considered disturbing and offensive. The  university should be showing its students how offensive it really is.

An anti-Abortion group called the Center for Bio-Ethical Reform (CBR) will be showcasing their traveling display called Genocide Awareness Project  at the University on Feb. 13 and 14th. The exhibit juxtaposes images of aborted embryos and fetuses with images of victims of historical and contemporary genocides and other injustices.

The school’s Office of Communications sent an email to all students which gave the dates of the display and went on to say:

“CBR is a national pro-life organization known for displaying graphic images of aborted fetuses, and plans to host a traveling exhibit of such photos in the school’s centrally located Kellogg Plaza.

“This presentation is a graphic anti-abortion display,” the university declares in its announcement. “Members of our campus community may find this content disturbing and offensive.”

“the group’s right to present this display on campus is protected under the First Amendment,” but emphasizes that “this is not a university-sponsored presentation,” and cautions students who may wish to protest the pro-life display that “if you decide to engage with [CBR] volunteers, please be aware that they are known to videotape interactions and conversations.”

Oh my, my, my—how evil!  CBR protects itself by filming interactions with protesters so there is an accurate record—that should be against the law for pro-life groups.

Now here comes the part about California’s tax dollars at work. The letter state that the school is offering a variety of resources to student who “may need assistance” dealing with the presence of a pro-life group on campus, and is pledging to keep both the Student Health & Counseling Center and the Gender Equity Center “open and available to students” while CBR is on campus.

After all,  all it is okay for our little snowflakes to have an abortion, but the shouldn’t  know what killing a baby really looks like.

On Feb. 14, for instance, faculty members from the College of Humanities, Arts, Behavioral, and Social Sciences will be a holding “A Conversation about Reproductive Justice,” which will be free for any member of the campus community who wishes to attend.

Shouldn’t it be called “A Conversation about Reproductive Justice for everyone except the baby who gets torn out of the uterus and possibly having its corpse cut apart and sold for spare parts by planned parenthood”?

In addition, CSUSM notes that “our Student Health and Counseling Services will staff two resource tables in the plaza area from 8 a.m. to 5 p.m. on both Feb. 13 and 14” that students can visit if they feel triggered by the anti-abortion imagery. [I bet the will also be providing juice and chocolate chip cookies]

Nathan Apodaca, a Campus Reform campus correspondent and the president of Students for Life at CSUSM commented:

“We don’t think it’s necessary for the school to send out a warning to all students, as we do put up signs on the walkways to warn passersby of what is ahead, but it is helpful in that it does let people who don’t want to see the display know that it will be on campus,” Apodaca told Campus Reform. “The images are very graphic, but they are necessary to show the public just what abortion is: namely, an act that decapitates and dismembers an innocent human being, without proper justification.”

“I would hope the school would invite a pro-life panelist to participate in the [faculty] discussion,” he remarked in reference to the “Reproductive Justice” panel, but conceded that “it is doubtful that they will,” given the number of past events held by the university at which no pro-life panelists were present.

The college’s Student Initiatives Coordinator John Scheuerman told Campus Reform the Reproductive Justice  faculty panel “is not a debate about pro-life versus pro-choice, but rather a conversation by experts on the topic of reproductive justice.” Of course that is not a debate…a debate assumes that all sides of a particular issue will be presented. But we all know only liberal issues are allowed to presented on most college campuses.

The real issue here goes way beyond abortion. We have raised a generation that can’t comprehend that their actions have consequences. When these snowflake were younger they played in sport leagues where there were no winners or losers because the parents voted to stop keeping scores, where everyone got a turn at bat, and High School football coaches were told not to their voices at the kids. These kids never played dodgeball that nasty sport not because the ball hurts when it hits them but because it singles out a certain child to be hit with the ball. Now that they are in college, these snowflakes  require a trigger warning before they take a class or safe rooms with stuffed animals and puppies so they can avoid any kind of negativity on campus microagressions. And rather than being taught not to get pregnant, they are being taught to have abortions, but don’t look because killing a baby can be gross.

This is American society today and God help us if we don’t fix it soon.