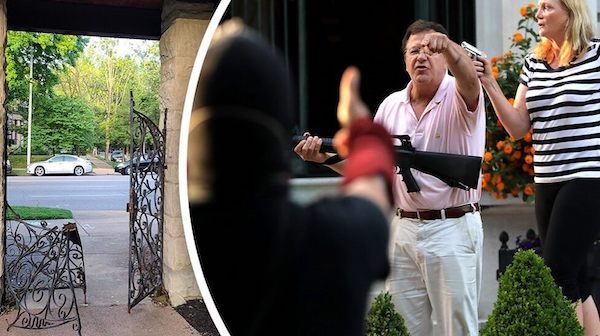 charges filed against the McCloskeys

UPDATE AT BOTTOM OF POST:
St. Louis Circuit Attorney Kim Gardner filed charges against a St. Louis couple who defended themselves by brandishing firearms when a protest mob broke into their property.   Mark and Patricia McCloskey, the Central West End couple who confronted protesters June 28 with a rifle and a handgun that can’t fire, have been charged with unlawful use of a weapon/flourishing.

In Missouri, that charge is a class D felony and could result in one to four years in prison as well as fines up to $5,000.  Per St. Louis TV Station KSDK Gardner’s office will be issuing a summons for the couple to appear in court.

But to issue the charges, prosecutors must prove the guns were capable of lethal force–but they weren’t. Last week the McCloskeys former attorney Al Watkins said he turned over the pistol that Patricia McCloskey pointed at the mob because she worried about her personal safety. Watkins noted that the handgun he gave to the police wasn’t really kept for self-protection. It wasn’t a working gun. It was only used as an exhibit in the McCloskeys’ own law practice for a lawsuit against the handgun manufacturer.

During the incident with the mob, Mark McCloskey had the safety of the semi-automatic rifle engaged and did not finger the trigger. Per KSDK, A source familiar with the investigation told them that police did not find any ammunition at the McCloskey’s home, and the rifle was not loaded when they seized it. So neither firearm was capable of lethal force.

“The charges filed today against my clients, Mark and Patricia McCloskey, are disheartening as I unequivocally believe no crime was committed.

“I, along with my clients, support the First Amendment right of every citizen to have their voice and opinion heard. This right, however, must be balanced with the Second Amendment and Missouri law, which entitle each of us to protect our home and family from potential threats.

“With that being said, given the heightened attention focused on this matter due to the current political environment, I don’t believe it is prudent to comment any further, at this time, or to try this case in the media.

“I look forward to reviewing the evidence and defending the McCloskeys against these allegations.”

Schwartz said he has fielded dozens of calls from people across the country wanting to replace the weapons taken from the McCloskeys. One gun store offered to replace the guns and give them five more, he said.

Under Missouri law under the castle doctrine, an individual has a really expansive authority to protect their own lives their home, and their property. And I think the story here to watch here is the local prosecutor Kim Gardner has an abysmal record in prosecuting violent crime and been complicit in the release of dozens and dozens of inmates who’ve been charged with violent crimes and has a record of making politically motivated decisions not based on the law. So this is certainly something to watch

The Washington Times reported Gardner said in an interview with the AP  that the McCloskeys’ actions risked creating a violent situation during an otherwise nonviolent protest.

NONVIOLENT??? They nonviolently broke the gate down?

Missouri Attorney General Eric Schmitt on Monday moved to dismiss charges brought by St. Louis’ top prosecutor against a couple who pointed guns at a crowd marching to the mayor’s home last month,  He released the following statement:

Following earlier charges issued, Missouri Attorney General Eric Schmitt filed a brief in the case of Mark and Patricia McCloskey supporting the Castle Doctrine law and seeking the dismissal of those charges recently filed by the Circuit Attorney’s Office.
“The right to keep and bear arms is given the highest level of protection in our constitution and our laws, including the Castle Doctrine. This provides broad rights to Missourians who are protecting their property and lives from those who wish to do them harm,” said Attorney General Schmitt. “Despite this, Circuit Attorney Gardner filed charges against the McCloskeys, who, according to published reports, were defending their property and safety. As Missouri’s Chief law enforcement officer, I won’t stand by while Missouri law is being ignored – that’s why I entered this case to seek its dismissal, to protect the rights of Missourians to defend their property under Missouri’s Castle Doctrine.”

The brief supporting dismissal reads, “The right to use firearms to defend one’s person, family, home, and property has deep roots in Missouri law. Self-defense is the central component of the right to keep and bear arms, which receives the highest level of protection from the Missouri Constitution. Missouri’s statutes specifically authorize Missouri citizens to use firearms to deter assailants and protect themselves, their families, and homes from threatening or violent intruders. A highly publicized criminal prosecution of Missouri citizens for exercising these fundamental freedoms threatens to intimidate and deter law-abiding Missouri citizens from exercising their constitutional right of self-defense.”

The brief finishes with, “On behalf of all Missourians who wish to exercise their right to keep and bear arms in self-defense of their persons, homes, families, and property, the Attorney General respectfully requests that the Court dismiss this case at the earliest possible opportunity.”

The briefs, which were filed this afternoon, can be found here.

ges filed against the McCloskeys

*NEW* BREAKING: Biden ADMITS He Raised The Gas Prices ON PURPOSE So He Can Do This [VIDEO]
America's Freedom Fighters