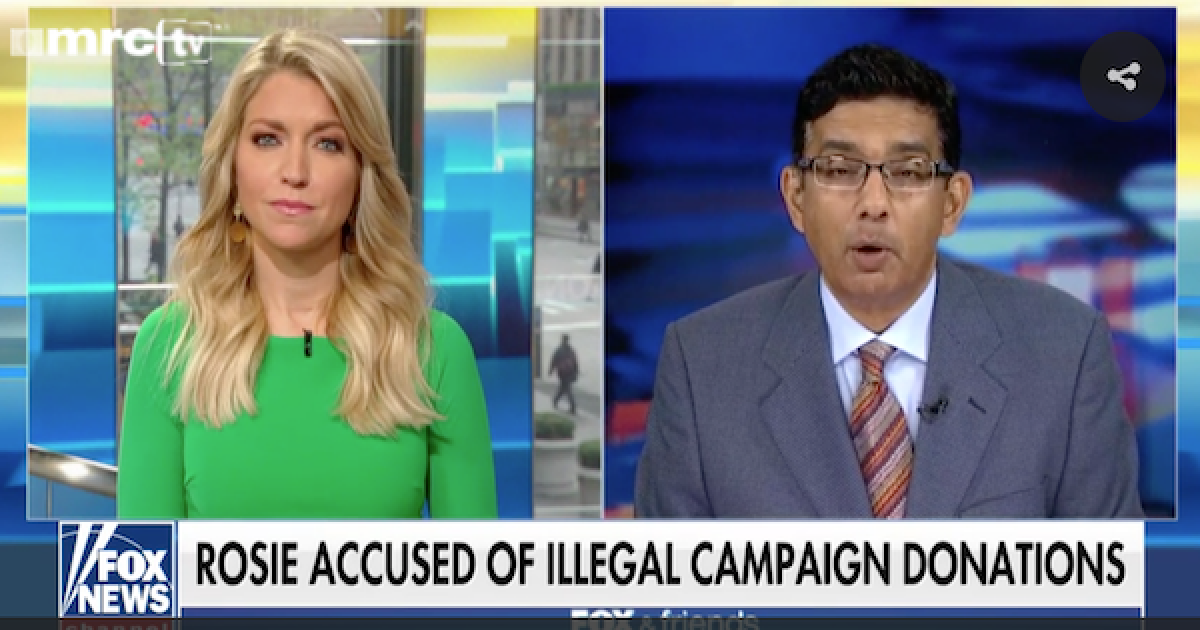 Dinesh D’Souza is justifiably upset. On Saturday, the New York Post reported that Trump hater Rosie O’Donnell made illegally over-sized campaign donations to at least five Democratic federal candidates, using five different addresses and four names. He went over with one candidate and used his real name and he was incarcerated for eight months.

O’Donnell donated $2,950 to California Rep. Adam Schiff, a 17-year veteran of the House, for his primary, according to his campaign filings. His campaign didn’t return messages seeking comment.

Lauren Underwood, an Illinois congressional candidate, reported $4,200 from O’Donnell for her primary, filings show. Her campaign didn’t return a message.

And Omar Vaid, a little-known congressional candidate in Staten Island and Brooklyn, reported $3,450 in primary donations from O’Donnell, filings show. Vaid’s finance director said the campaign “inadvertently designated” some of the money to the “wrong election” and would amend its filings.

Why did Rosie use fake names and addresses in the five donations that exceeded the limit of $2,700 per candidate? That smells like covering up a crime to me.

Federal Election Commission rules limit contributions to federal candidates to $2,700 per election. Donors can max that out in a primary race, then max it out again during a general election for the same candidate. O’Donnell contributed more than $2,700 each to five candidates during the primary race.

“Both donors and candidates are legally liable for contributions over the limit. But it’s unlikely O’Donnell or her benefactors will be penalized for breaking FEC rules,” the Post said.

“Donors are rarely fined for excess contributions and then only if they are hiding the donations from the recipients,” Jan Witold Baran, a prominent D.C. campaign finance lawyer told the Post. “Campaigns generally are not penalized for isolated contributions over a limit. However, multiple excessive donations may lead to an investigation … Fines could result in such cases.”

One person who would disagree with that statement would be Dinesh D’Souza. The conservative filmmaker pleaded guilty in 2014 for donating $20,000 to New York politician Wendy Long who was a college friend. He was sentenced to five years probation, eight months in a minimum security jail,  and paid a $30,000 fine.

D’Souza was on Fox and Friends Monday morning where he lamented the unequal treatment. After all, D’Souza made one campaign violation, Rosie made FIVE.

“It seems clear from what we know, that Rosie broke the law and she broke the law five times. So it’s in a sense an egregious violation.” He continued, “What makes it particularly sneaky on her part is that she used four different names and five different addresses. So it seems clear that she knew what she was doing and she was trying to cover her tracks.”

“Now normally, if these offenses occur a single time, particularly when there’s no corruption involved they don’t prosecute them. But they do prosecute repeat offenders and it seems clear that Rosie, in this sense, is a repeat offender,”

Will @Rosie be held to the same standard as @DineshDSouza for illegally exceeded campaign contribution limits? https://t.co/WbTC9BUFnT via @MailOnline

Dinesh D’Souza got locked up for a small campaign contribution in a reimbursement with a friend.

So which is it DOJ, is everyone equal under the law? Unless you charge Rosie we know the answer (actually when one sees the difference Hillary’s real crimes were treated vs, Trump’s non-crimes we already know the answer)–Conservatives beware.