Will it Trigger The Planetary Equivalent Of The Windows BSOD? 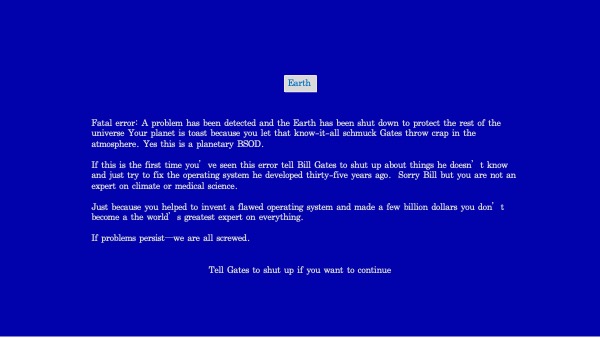 We know what you’re thinking – this can’t be real. Well, friends, it is.

Reuters reports that the Harvard project “plans to test out a controversial theory that global warming can be stopped by spraying particles into the atmosphere that would reflect the sun’s rays.”

In Sweden, plans to fly a test balloon next year are already underway.

The test balloon will not release any particles into the atmosphere but “could be a step towards an experiment, perhaps in the autumn of 2021 or spring of 2022.”

Those experiments may see “up to 2 kg of non-toxic calcium carbonate dust” released into the atmosphere.

Bill Gates is living proof that just because you once did something very smart to make your mark on the world, it doesn’t necessarily make you a smart person.   The man who hasn’t been able to fix the Windows BSOD since he released the operating system thirty-five years ago believes he can fix something that’s not happening.

Having the gall to play God by dimming the sun’s rays and thinking it won’t lead to drastic and unpredictable problems makes that case rather obvious.

Reuters notes the project – called the Stratospheric Controlled Perturbation Experiment (SCoPEx) – is playing with “something with potentially large and hard-to-predict risks, such as shifts in global rain patterns.”

“There is no merit in this test except to enable the next step,” said Niclas Hällström, director of the Swedish green think-tank “WhatNext?” said. He added, “You can’t test the trigger of a bomb and say ‘This can’t possibly do any harm.’”

Heck, it could trigger the equivalent of a planetary BSOD.

It's important to note that Prof. David Keith at Harvard, an adamant proponent of Sun blocking through sulfur aerosols has been receiving funds from Bill Gates since 2007: https://t.co/HbN823pTrp

Social-engineering fan Bill Gates made news earlier this month when he wanted to figuratively dim the sun on society by suggesting pandemic lockdowns could and should be extended.

The tech nerd expressed support for shutting down bars and restaurants for up to an additional six months and indicated lockdowns may continue all the way into 2022.

.@BillGates on Covid: "Even through 2022” we should be prepared for life to not return to “normal”

Says “sadly" it’s "appropriate” for bars and restaurants to close over the next "four to six months" pic.twitter.com/cmDD8pv3XR

“Certainly, by the summer will be way closer to normal than we are now, but even through early 2022, unless we help other countries get rid of this disease and we get high vaccinations rates in our country, the risk of reintroduction will be there,” Gates warned CNN anchor Jake Tapper.

Many Americans have shown they aren’t willing to continue with the lockdown charade. We’re not sure how many will be thrilled with Gates being the ruler of the sun either—he should really just shut up and finally fix his operating system.

Much of this post first seen at The Mental Recession