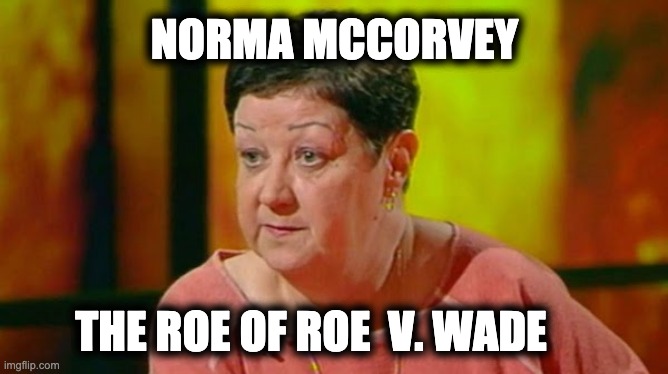 A new FX documentary, AKA Jane Roe, raises many questions about the real Jane Roe who pseudonymously sought an abortion in Texas, was at the heart of the infamous 1973 Supreme Court decision, Roe v. Wade. She claimed she had been impregnated in a gang-rape. did Roe really recant

In the mid-1980s, Roe was revealed to be Norma McCorvey.

In the mid-1990s, she stunned the world by professing to have become a Christian and an opponent of abortion. She then claimed she had never been raped at all. And now comes a documentary in which she, in the final year of her life, apparently claims that her switch to the pro-life position was all an act, for which she was paid.

It should be noted she was paid to appear in the FX documentary. Nick Sweeney, the documentary producer, has made movies about sex robots and girls becoming “boys.”

The Daily Beast reports on perhaps the most critical scene in the FX documentary:

“This is my deathbed confession,” [McCorvey] chuckles, sitting in a chair in her nursing home room, on oxygen. Sweeney asks McCorvey, “Did [the evangelicals] use you as a trophy?” “Of course,” she replies. “I was the Big Fish.” “Do you think you would say that you used them?” Sweeney responds. “Well,” says McCorvey, “I think it was a mutual thing. I took their money and they took me out in front of the cameras and told me what to say. That’s what I’d say.” She even gives an example of her scripted anti-abortion lines. “I’m a good actress,” she points out. “Of course, I’m not acting now.”

In addition, she is alleged to have said that she didn’t really care if a woman got an abortion. This doesn’t seem to fit the picture of the reborn Norma. However, in the big picture of things, the preview appears to contradict the vast majority of her words and deeds, from the time of her conversion in 1995 to her death in 2017. She even unsuccessfully sought to have the Supreme Court overturn Roe since it was all based on lies.

As reports came out last week about this disturbing new documentary, many pro-life leaders that knew Norma McCorvey personally have spoken out to say that this is not the Norma McCorvey they have known all these years—nor does it represent who she truly was.

Cheryl Sullenger is the Senior Policy Advisor for the activist pro-life group, Operation Rescue—a group that played a critical role in McCorvey’s stated conversions to Christianity and to the pro-life position. Cheryl told me:

“I knew Norma personally….I have seen her in unguarded moments. She was a person that was a bit rough around the edges, but that never bothered me. If she was in a mood, she could say things that were controversial or even shocking, but I can attest that she was always pro-life.”

On my radio show, Sullenger added that the claim McCorvey received money from the pro-life movement proves nothing. Receiving honoraria for speaking engagements is a common practice, no matter one’s politics.

Furthermore, Norma claims in the FX documentary that they (pro-lifers/the evangelicals/the Catholics) told her what to say. That can sound worse than it was. Sullenger noted that Norma had little education and she was not a polished public speaker. Thus, in various venues in which she spoke, speech writers crafted the copy she read. That type of thing happens all the time, again, no matter one’s politics.

Father Frank Pavone of Priests for Life, knew Norma McCorvey for 22 years. He said about her,  “Her desire to protect children in the womb was no act.” On my radio show, Father Pavone noted that the documentary interview was in May 2016, but she died in February 2017. This was no “deathbed confession.” He also noted that Norma was unpredictable. You never knew what would come out of her mouth.

He notes that the producers of the FX film never asked him for an interview, despite how close he was to Norma. Father Pavone, who preached her funeral, even spoke with Norma on the day she died (by phone), and he says she told him to keep up the fight on behalf of the unborn.

I also spoke with Abby Johnson, former Planned Parenthood abortion clinic director, whose dramatic pro-life conversion is described in her book (with Cindy Lambert) and movie, Unplanned. She said pro-lifers should not be distracted by this recent controversy: “Stay focused on the goal—abortion is wrong no matter what.”

Only God knows the heart. Norma McCorvey was a fiery, unpredictable woman with rough edges. But regardless of who was telling the truth between the Norma of 1995 and the Norma of 2016 (in that one interview), the realities of abortion, legalized in her court case, do not change. Abortion unjustly takes an innocent human life and does incredible damage to the mother. That’s not a matter of changing opinions or the passage of time. That’s a fact.