Obama Likens Trump To Dictator, But It Was Obama Who Took Dictatorial Actions

Obama Spied on Americans and Killed Americans Without Authorization 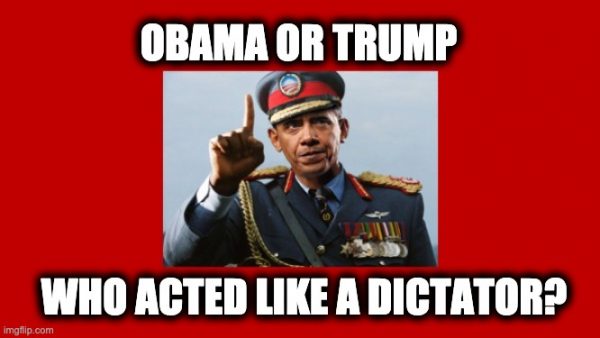 Barack Obama suggested President Trump’s unwillingness to concede the election is comparable to “strong men and dictators” who will do anything to hold onto their power. dictator Obama

And by anything, the former President means anything, equating Trump’s actions to killing or jailing political opponents.

“The president doesn’t like to lose and never admits loss,” Obama told Scott Pelley of “60 Minutes.”

The President’s insistence on counting all legal votes in the election, he believes, “is one more step in delegitimizing not just the incoming Biden administration, but democracy generally.”

But the former President, whose administration spied on his successor, doesn’t stop there.

“I think that there has been this sense over the last several years that literally anything goes and is justified in order to get power,” Obama, the man who spied on an incoming administration said unironically.

“That’s not unique to the United States. There are strong men and dictators around the world who think that, ‘I can do anything to stay in power. I can kill people. I can throw them in jail. I can run phony elections. I can suppress journalists,’” he continued.

That’s not who we’re supposed to be.”

Jon Miller puts that Obama rant in perspective, “Bro, you literally did all those things.”

Obama says Trump’s a dictator for thinking: "I can kill people. I can throw them in jail. I can run phony elections. I can suppress journalists."

Bro you literally did all of those things.

Barack Obama or Trump, Which One Acted Like a Dictator?

The fact that Obama was able to make those statements knowing full well he was the one who actually took such ‘dictatorial’ actions is rather remarkable.

In his first week in office, Obama authorized a drone strike that killed nearly a dozen civilians, including a child.

He authorized drone strikes time and again that killed American citizens without charge or trial – like Anwar al-Awlaki, and his 16-year-old son, Abdulrahman.

Officials had linked the online videos and ideology of al-Awlaki to at least 11 terror incidents between 2009 and 2016. He was a bad guy. He was also an American killed in Yemen, a nation with which we were not at war.

However, his son’s lone association with terrorism was the fact that his father had given those terrorist-inspiring sermons. Abdulrahman was certainly not given due process.

The administration at the time suggested that 16-year-old Abdulrahman should have “had a more responsible father.”

Anyone who does this needs serious help (?). Unfortunately, it's representative of the mentality of the murderous bipartisan US foreign policy community. Remember what Obama aide Robert Gibbs said to justify the murder of Awlaki's US-born teenage son: https://t.co/7lkxLkJzl4 https://t.co/gNs6Ux16zo

Obama Was the King of Suppressing Journalists

Aside from his ‘I can kill people’ comments in describing President Trump as a dictator, Obama was also well known for the ‘I can suppress journalists’ aspect as well.

The former President used his Department of Justice (DOJ) in an attempt to shut down Fox News reporter James Rosen by spying on him and accusing him of committing a crime.

A 2010 subpoena approved by Eric Holder implicated Rosen as a possible co-conspirator under the Espionage Act of 1917. As such, investigators gained access to the times of his phone calls and two days’ worth of Rosen’s emails. They also seized the phone records of Rosen’s parents.

Right, accountable. So why did Obama's DOJ lie to the judge about James Rosen being a suspect & break into Sharyl Attkisson's computer to find their admin leakers holding Obama et al accountable? https://t.co/UpisFmiolp

The DOJ had mounted a serious attack on the First Amendment and Freedom of the Press by seizing reporters’ records at Fox News and the Associated Press (AP).

The AP reporters – 20 of them – had their phone records subpoenaed through their providers, something they claimed at the time was a “massive and unprecedented intrusion” into news-gathering operations.

In fact, New York Times reporter James Risen, who had experienced the attack on press freedom under Obama firsthand, said it was the Democrat who would be to blame if Trump tried to shut down the press.

“If Donald J. Trump decides as president to throw a whistle-blower in jail for trying to talk to a reporter, or gets the FBI to spy on a journalist, he will have one man to thank for bequeathing him such expansive power: Barack Obama,” Risen wrote.

The AP concurred in a fact check on Barack Obama and his dictator-like attacks on the press.

“Trump may use extraordinary rhetoric to undermine trust in the press, but Obama arguably went farther,” they wrote, “using extraordinary actions to block the flow of information to the public.”

When Obama refers to Trump as a ‘dictator’ of sorts, he’s simply projecting.

Cross-Posted with The Mental Recession