Sen. Dick Durbin Has a Long History of Lies & Subterfuge For Politics 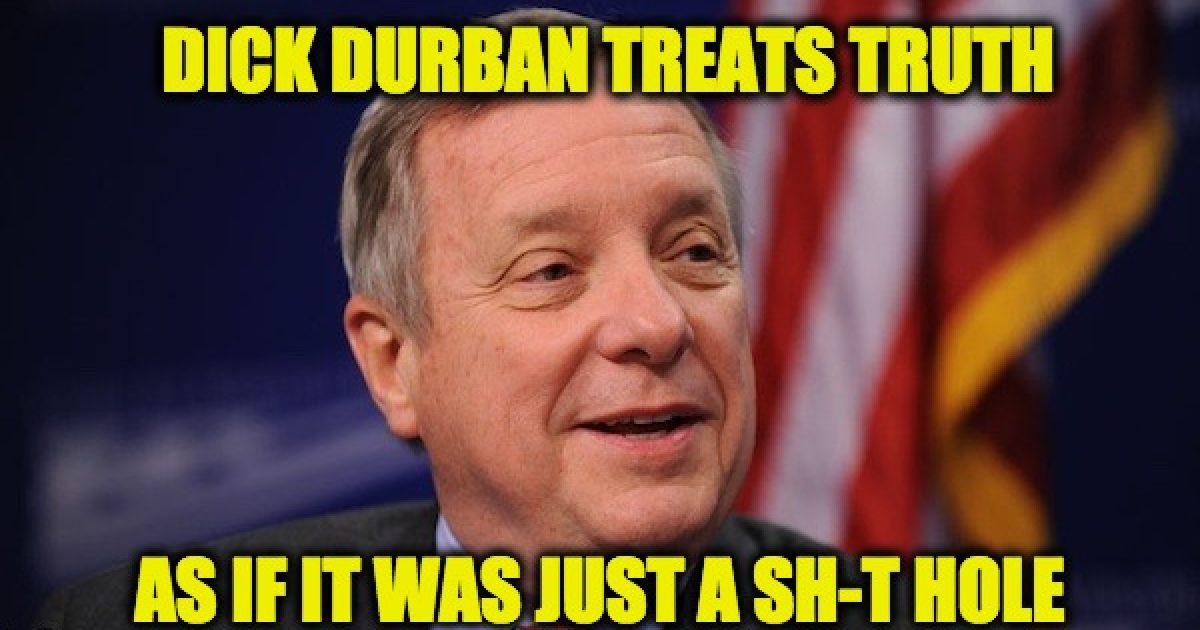 The nation recently discovered Illinois Democrat Dick Durbin after he made the so far unsupported claim that President Donald Trump called several third world nations “sh**hole countries.” But, what most Americans don’t know is that Dick Durbin has a long history of lying in service to the Democrat Party and the anti-American, left-wing cause.

Durbin hit the airwaves last week claiming that Trump disparaged several foreign nations, including Haiti, Durbin proclaimed Trump a racist (again) and attacked him for being un-presidential. But the comment, IF Trump, even said it, was said in a private meeting, not in a public forum. So, in truth, we have no actual proof it was said.

The ensuing media frenzy is entirely hypocritical of the press considering that, to one degree or another, nearly every single president (and vice president, for that matter) has had a potty mouth in private meetings. And yet, the press has never reported on the salty language of past presidents. But Trump? Oh, yeah, the media went wild to report on the claimed cursing by Trump, despite the lack of proof he even said it.

But, what about that “proof”? The claims the media fell all over itself to report upon came from no less than Illinois Democrat Dick Durbin. And Durbin has decades of lies piled up to his credit. In fact, Durbin is one of the biggest liars in the whole of the upper chamber.

One of the more trenchant recent lies from Durbin is directly connected to the current immigration debate. Along with his claim about Trump, last week Durbin also complained that using the term “chain migration” is considered “racist.” This is a flat-out lie. No one anywhere has ever said that the term is “racist” until Durbin tried to use it as a weapon against Republicans.

Indeed, this liar himself has used the term chain migration without claiming there was any “racist” connotation. Back in 2010, Durbin was happy to argue in favor of the policy saying that it was a necessary part of the DREAM Act.

There are many other examples of Durbin lies. Back in 2013, for instance, Durbin was at it again, lying about what was said in a private meeting. Durbin claimed that House Republicans acted in a racist manner toward President Obama and said they “can’t stand to look at him.”

Durbin soon started sending out fundraising letters on the strength of his claims, yet not a single other people ever substantiated this lie, including Obama.

In another case, in 2014, on Meet The Press, Durbin made the wild-eyed claim that ten million Americans found new health insurance thanks to Obamacare. He also claimed that Obamacare would lower the deficit. But even the Washington Post gave its worst rating to Durbin’s lies.

As the discussion shifted to healthcare during the Feb. 5 broadcast, host Bob Schieffer lamented that Obamacare is still confusing everyone and asked Durbin if there is “any hope of getting it straightened out”?

“Bob, let’s look at the bottom line. The bottom line is this. Ten million Americans have health insurance today who would not have had it without the Affordable Care Act–10 million.”

Then he lied about the deficit:

“And we can also say this. It is going to reduce the deficit more than we thought it would. We were seeing a decline in the growth of the cost of health care, exactly our goal in passing this original legislation.”

And then this snake-tongued liar gave his sales pitch:

I’m finding people, as I go across Illinois, who, for the first time in their lives, have an opportunity for affordable health insurance for their families. Now, there are many republicans who are wishing that this fails, hoping they can find any shred of evidence against it. But we had a bad rollout. Let’s concede that point. Since then, we are gaining steam. And I think, ultimately, we’re going to find you can’t go back. You have to extend the health insurance protection to the 25 million, 30 million Americans who will ultimately have it, and we’ll be a better nation for it.

Nearly every word of this was a lie.

To start with, the recent CBO report did not in any way say that Obamacare would bring down the deficit. On the contrary, the report said that the deficit will rise uncontrollably after 2015.

As to the millions that Durbin claimed have gotten new healthcare coverage, the Post fact checker noted, “Durbin appears to be combining two figures released by the administration,” and neither number is true.

The paper points out that the number pushed by the White House, that 6.3 million have gotten new insurance under Obamacare, is impossible to substantiate because there is no way to know if those that tried to sign up actually got an insurance policy and began paying premiums. The White House is making claims that it simply cannot prove and Durbin parroted these empty claims.

The paper went on to say that about all one can say about the number of people who have signed up and gotten new health insurance can amount to no more than 4 million and even that estimate is being “extraordinarily generous.”

In conclusion, the Post criticizes Durbin saying he “has little excuse for going on national television and claiming that every one of these people had been previously uninsured. This has now become a Four Pinocchio violation.”

Senator Durbin, however, is undaunted by his outlandish claims. After the Washington Post published its fact check, his office replied to the criticism. Durbin disagrees with the Post and said, “Fact check after fact check has confirmed that more than 9 million Americans have signed up for private health insurance or Medicaid coverage through Affordable Care Act. Many of the more than 9 million Americans are being covered for the first time. No matter the number of new enrollees, there is no question that the law is working and millions of people are realizing the benefits of affordable health coverage and the protections it guarantees.”

In reply, the paper noted that it is “unaware of any fact checks that have confirmed these figures as all ACA enrollments or evidence that ‘many’ of the enrollees are being covered for the first time.”

But, perhaps even worse, this is the same senator who said that our troops are Nazis.

This is the kind of scumbag Senator Dick Durbin is.