Dick Costolo, Former Twitter CEO Says Some Capitalists Will be Shot in the Revolution 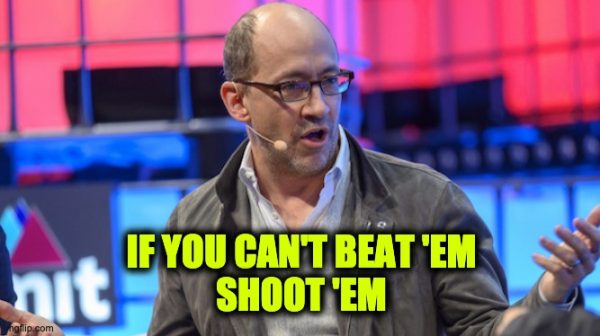 There’s a lot of talk around leftist camps about “the revolution.” And some of the rhetoric is vicious to the point that …nobody is doing anything about it. Twitter’s former CEO, Dick Costolo, tweeted that certain Capitalists who don’t engage in social justice issues will be “the first people lined up against the wall and shot in the revolution.” He’s a real charmer, isn’t he?

Me-first capitalists who think you can separate society from business are going to be the first people lined up against the wall and shot in the revolution. I’ll happily provide video commentary.

The Twitter thread talks about companies that refuse to involve themselves in “social justice” issues. Costolo believes all companies should be involved. Which would mean that companies across the spectrum would be interfering in everyone’s life. There are already massive problems stemming from companies interfering with Conservatives and others from companies like PayPal to GoFundMe and social media. Their definition of social justice is more like “Do it our way, or we’ll hurt you.” And they do. But that may be only the tiny tip of the iceberg if the radicals take over our legislative branch.

If you ever want to know what that whole “revolution” thing is about, Dick Costolo just let you know. And Twitter, who is hell on wheels against anything the President or any Conservative says, didn’t take the tweet down. It’s a clear violation of their rules against violence, but hey, the rule is for us, not the leftists, and especially not one of the former heads of Twitter.

With that rhetoric in the background, what do you think will happen on or after the election? Biden says everything will “go back to normal.” Members of his own party say there will be ‘massive changes’ if they win. (Fox)

The problem is that in any Communist-based “revolution,” people die. You can sugar-coat that any way you choose, but it’s a fact. Mr. Costolo was only stating the fact that anyone who disagrees with the ‘new rulers’ in a revolution is lined up against the wall and shot. Or some other more evil method. You only need to crack a history book to read about Mao Zedong, Stalin, Lenin, Karl Marx, Fidel Castro, and his murdering buddy Che Guevara to understand those facts.

Can it happen here? Just look at the last several months of chaos to answer that. The fact that Twitter et al.,  on social media lean left and are actively attacking Conservatives, should give you a heads up. The Communist anarchist insurrection in our major cities is one clue. The openly hostile rhetoric from Congress is another. Ignorant Hollywood celebs continually voice their hatred for the President. Why does the news media fawn over the never-Trumpers and condemn his supporters? You know the answer. They may be setting us up for something, and it won’t be a picnic.