She Demanded The FAA And FTA Mandate Mask-Wearing At Airports 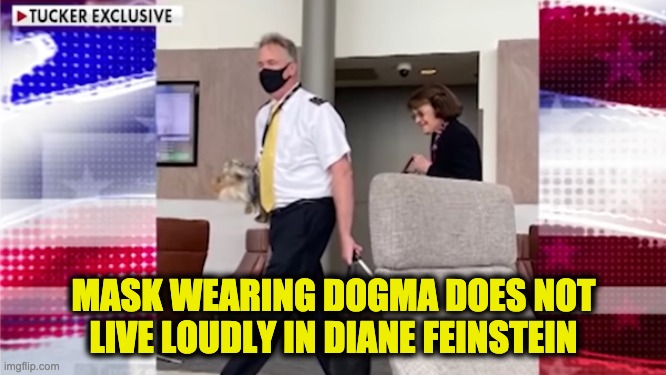 The wearing a mask dogma does not live loudly in Diane Feinstein. Like most liberals, California Senator Dianne Feinstein believes rules aren’t for her—even the rules she wants to create Tucker Carlson exposed Dianne Feinstein’s hypocrisy on Monday evening. Feinstein was photographed in an airport without a mask just months after she called for a nationwide mandatory mask policy for airport passengers. Dianne Feinstein not wearing mask

The pictures Tucker said were taken a private airport terminal at Dulles International Airport. (See the video at the end of the post)

“In the photographs, Feinstein can be seen smiling without a mask on. One might even say she’s sowing confusion about whether or not masks are necessary, A pilot with a mask is walking in front of her carrying a bag and a dog.”

I wonder if the pilot is carrying Senator Feinstein’s bag and dog.  After all, she can no longer rely on her former driver/Chinese spy to carry her bag and dog, or to even remind her to wear a mask.

On June 29th of this year, Feinstein issued a press release bragging how she sent a letter to the Federal Aviation Administration and Federal Transit Administration, calling for them to institute mandatory face-covering policies.

“I write to urge you to implement a mandatory mask policy for all airport and airline employees and passengers as cases of coronavirus continue to surge. I ask that you issue guidance as soon as possible so passengers can have a clear understanding of the requirements and so that we may reduce exposure for workers and travelers alike,” wrote Feinstein in her letter to the FAA.

“While some transit agencies and airlines have implemented mandatory mask guidance for the public, reports indicate that the patchwork of rules have only sowed confusion among passengers.  Therefore, I ask that you issue clear, nationwide, mandatory mask requirements for all aviation employees and travelers.”

If anyone should voluntarily wear a mask in an airport it’s Senator Feinstein. At age 87 she is considered a high-risk if she contract the coronavirus.

The video below is Tucker Carlson’s report on the Feinstein hypocrisy.