Is Russia Hinting A Desire To End Invasion? Or Are They Trying To Make Ukraine The Bad Guy

They Want A Referendum On Kherson Region 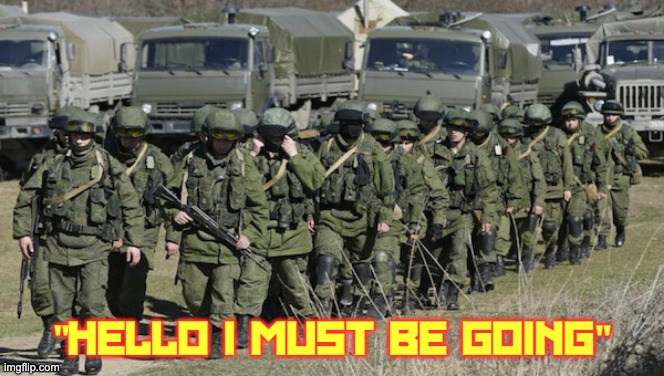 Putin’s press secretary Dmitry Peskov told journalists that “residents of Kherson must decide for themselves” whether they will “appeal” for “integration of the region into the Russian territory,” according to TASS.

Russia will never fully conquer Ukraine, and it appears as though the Kremlin is finally coming to terms with this reality.

What Vladimir Putin thought would be a 72-hour mission to topple Kyiv and absorb the whole of Ukraine into Russia’s invasion has turned into a prolonged and embarrassing failure for the Kremlin.  More than two months into the conflict, Russia has moved the goalposts with a frequency resembling a hummingbird flapping its wings.

With casualties mounting, their military’s morale in the toilet, and reunifying the NATO alliance, Russia is once again softening its goals.

During the meeting with the press mentioned above, Press Secretary Peskov:

“refused to be drawn on the possibility of a referendum, saying he “stated what I wanted to state,” but former DIA officer Rebekah Koffler argued that Moscow will proceed with a referendum to provide “legal justification” for Russia to integrate Kherson.

(…)“This is the first time, since the beginning of Russia’s invasion of Ukraine on February 24, that such a senior Russian official mentioned the idea of ending the ‘special operation,’” Koffler said.

The Kherson region would provide Russia its much-desired access to Southern Ukraine and establish a land bridge to Crimea. By securing this access, Russia would be able to control the mouth of the Dnieper River, which bisects Ukraine and provides access along the length of the country.

“Realizing he can’t win the war – as long as the U.S. and NATO are providing formidable weaponry and real-time intelligence to Ukraine – Putin is probably considering cutting his losses and ending the operation at this stage,” Koffler said.

Justifiably the Ukrainian President has a different idea:

Ukrainian President Volodymyr Zelenskyy on Wednesday assured Kyiv will keep on fighting against the Russian-imposed war until it restores total territorial unity. “This war will end for Ukraine when we restore our unity, our territory,” Zelenskyy said in an address from Kyiv via videoconference to university students in France from Sciences Po, the National Institute of Public Service, the Ecole Polytechnique, Inalco, and Pantheon-Sorbonne University. The initiative “60 minutes with Zelenskyy” was organized by the Ukrainian Embassy in France.

If the Russkies want an off-ramp, this ain’t it, especially when one considers Ukraine appears to be making great strides against the Russian military.