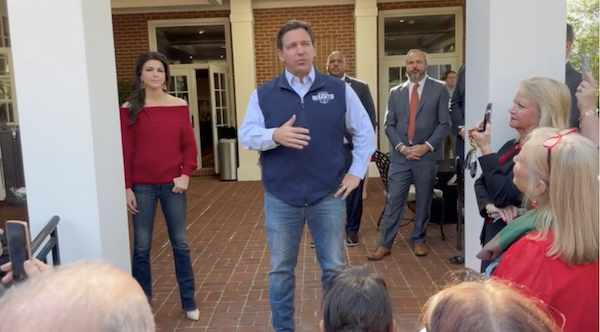 Governor Ron DeSantis said that Florida will “take the lead” in holding vaccine manufacturers for misleading the public about the safety of the COVID jabs.

The Governor made the comments on Saturday at a Republican Party of Florida (RPOF) event at the Florida Governor’s mansion.

DeSantis said that he will be working with Florida Surgeon General Joseph Ladapo “to hold these manufacturers accountable for this mRNA [shot] because they said there were no side effects, and we know there have been a lot.”

“We did a study in Florida and saw an 86 percent increase in cardiac-related activity in people ages 18 to 39 from mRNA shots. So we’re going to be doing some stuff to bring accountability there,” DeSantis told the group.

He also said that Florida was one of the few areas that pushed against vaccine mandates and will continue to do so.

“This is something that we’re going to lead on in Florida,” said DeSantis, “so we’re going to have some announcements in the next three or for weeks on that.”

The Emergency Use Authorization (EUA) provides a liability shield for vaccine manufacturers — but not if the test results were fraudulently produced.

In 2021, a whistleblower came forward claiming that Pfizer cut corners in their vaccine trials and could get away with making false statements about the results because the government was complicit.

The whistleblower, Brook Jackson, was the regional director for the Ventavia Research Group, the company that was conducting Pfizer’s pivotal phase III trial in Texas in 2020.In September of 2020, Jackson emailed a complaint to the FDA, informing the agency of the company’s allegedly dangerous and shoddy research practices. The FDA took no action on her email, and Pfizer continued to use the company.

Ventavia fired her after she tried to expose the alleged fraud, abuse, and protocol violations she witnessed during the trials.
In January 2021, Jackson filed a False Claims Act lawsuit in the United States District Court for the Eastern District of Texas, Beaumont Division.

Feminist author and journalist Naomi Wolf wrote in her “Outspoke” Substack that the Pfizer document dumps reveal that the pharmaceutical company and the FDA both knew by December 2020 that the vaccines quickly waned in efficacy and that one of the side effects of the jabs was… COVID.

Wolf also says that Pfizer knew about all sorts of problems with their mRNA shots but pushed forward anyway.

Pfizer knew in May of 2021 that 35 minors’ hearts had been damaged a week after MRNA injection — but the FDA rolled out the EUA for teens a month later anyway, and parents did not get a press release from the US government about heart harms til August of 2021, after thousands of teens were vaccinated. [https://dailyclout.io/pfizer-vaccine-fda-fails-to-mention-risk-of-heart-damage-in-teens/]

Pfizer (and thus the FDA; many of the documents say “FDA: CONFIDENTIAL” at the lower boundary) knew that, contrary to what the highly paid spokesmodels and bought-off physicians were assuring people, the MRNA, spike protein and lipid nanoparticles did not stay in the injection site in the deltoid, but rather went, within 48 hours

, into the bloodstream, from there to lodge in the liver, spleen, adrenals, lymph nodes, and, if you are a woman, in the ovaries…
…Pfizer skewed the trial subjects so that almost three quarters were female — a gender that is less prone to cardiac damage. Pfizer lost the records of what became of hundreds of their trial subjects.]

In the internal trials, there were over 42,000 adverse events and more than 1200 people died. Four of the people who died, died on the day they were injected.
Source: Outspoken

If any of that is correct, Florida holding Big Pharma accountable is a very, very good thing.

Here is the full video; remarks about the vaccines begin at around the 13-minute mark.