As A Great Floridian Named Jackie Gleason Once Said, "How Sweet It Is." 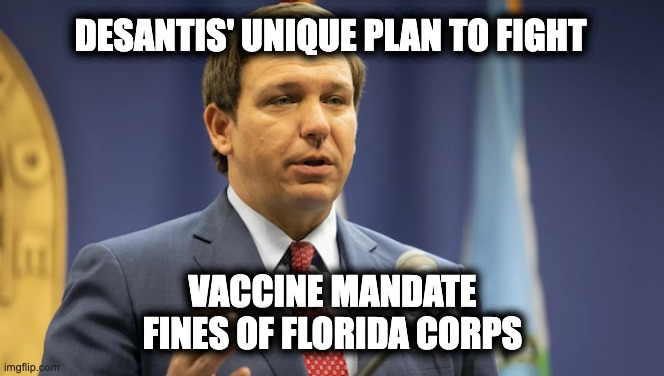 Every now and then, a politicking plan comes along that is so purely, undeniably American that it deserves to be exalted.

Ron DeSantis has just outlined such a plan.  It would move to tears our founding fathers, those who tossed tea to the sea, that our rights came from God and stood up to tell us all that we deserved life, liberty, and the pursuit of happiness.

Speaking at a dinner hosted by the National Federation of Independent Business’ Florida chapter this week, the Florida governor said, “If it gets to the point where they are trying to enforce, my view would be ‘don’t comply’ and we would support the Legislature taking some of the stimulus money and using it to pay off the fines that business incur.”

This isn’t the first time DeSantis has posited the idea, either.

According to Politico’s Florida Playbook:

A defense fund— This is the second time DeSantis has floated the idea of having Florida taxpayers offset any fines (a “defense fund,” he called it previously) placed on businesses if they do not comply with the rule put in place by the federal agency that oversees workplace safety rules [OSHA]. The governor noted the law is on hold due to an appeals court ruling and he predicted that “ultimately, it’s going down.”

Voila!  There you have it, folks!  The complete and utter gumming-up of the entire federal apparatus.  Just money being printed and shipped around, only to be sent back again until we all have enough of it to stop going looking for it.

DeSantis has not only found the cheat code here, folks, but it will make the liberals go frothing from their mouths crazy.