Says Censorship Is "One Of The Most Pervasive Threats To American Self-Government In The 21st Century." 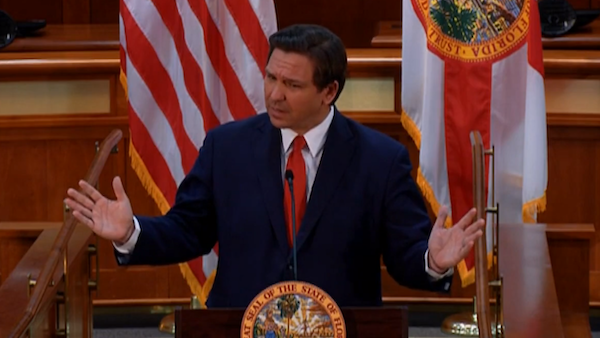 On Tuesday morning, Florida Governor Ron DeSantis was joined by fellow Republicans, Lt. Gov. Jeanette Nuñez, House Speaker Chris Sprowls, and Rep. Blaise Ingoglia to declare war on big tech social media censorship with proposed legislation called Transparency in Technology Act, which strives to stop the platforms from enforcing their own political views and banning anyone who disagrees with their political opinions (the full 44-minute speech is embedded below) DeSantis big tech censorship.

“At the turn of the 21st century, online technology represented tools to liberate Americans from reliance on distrusted legacy media outlets. As social media proliferated over the past decade, citizens could directly connect with large numbers of people and could cut out corporate media outlets entirely. Over the years, however, these platforms have changed from neutral platforms that provided Americans with the freedom to speak to enforcers of preferred narratives.”

DeSantis said the social media platforms have grown too powerful, calling them “one of the most pervasive threats to American self-government in the 21st century.”  Criticizing them for their arbitrary actions against conservative content and de-platforming users without telling them what they did wrong. Something that Facebook does to this writer at least once a year.

This morning, Speaker @ChrisSprowls is joining @GovRonDeSantis and Senate President @WiltonSimpson for a press conference to announce big tech accountability. This will be a PCB carried by Commerce Chair @GovGoneWild. #FlaPol #YourHouse pic.twitter.com/nSRoN2OCiu

The governor cited the censorship and banning of a sitting U.S. president, “What about the 88 million Americans who chose to follow Donald Trump? Sorry. Content moderators on Twitter pulled the plug,” He also mentioned the quashing of the New York Post’s  Hunter Biden story and the killing of Parler right after Trump was banned.

Parler was quickly growing before the Twitter Trump ban. But if the new platform wasn’t attacked, President Trump would probably have opened an account, and the already skyrocketing Twitter competitor growth would have accelerated incredibly.

“By their own admission, social media companies view themselves as platforms of global, regional, and local connectivity. Make no mistake, they are nothing more than advertising conglomerates, and I’m not interested in handing over the keys to the public square to a bunch of companies whose economic interests are not aligned with the public interest.”

The proposal outlined by the governor includes:

This sounds like a good start. Perhaps there can be a national version of DeSantis’ proposal. What do you think?