Why Russia’s Claim Of Denazification Is A Disgusting Hypocrisy

Russia Has Been Anti-Semitic For Centuries 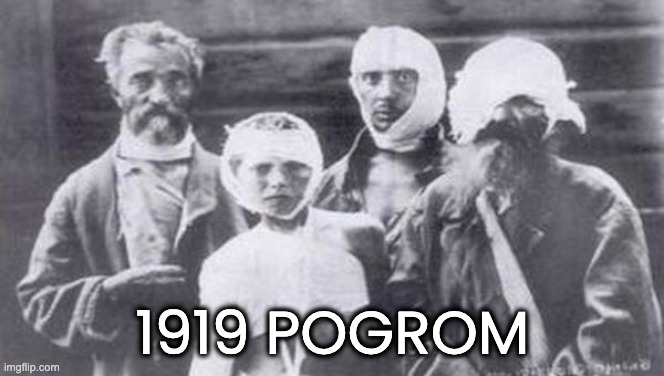 According to an interview with Italian media, Lavrov said: “So what if Zelenskyy is Jewish? The fact does not negate the Nazi elements in Ukraine. I believe that Hitler also had Jewish blood. It means absolutely nothing. The wise Jewish people said that the most ardent antisemites are usually Jews.

While the despot ruling Russia supposedly apologized to Israel’s PM Bennett, Putin, and the other Russian war criminals continue to state a reason for their invasion was to Denazify Ukraine.

Those anti-Semitic comments show a disdain for the Jewish people and a lack of understanding that while there were other genocides, the holocaust was a singular event in world history. which is why most people were upset with the comments. To me it’s a personal issue. It also ignores that Russia has been anti-Semitic throughout its long history.

I may have a personal bias. My paternal grandfather lived in Odessa as a child. In the late 1890s. My great-grandparents tired of the constant anti-Semitic violence and lack of opportunity for Jews and decided to get out of town and sail to America. Eighty-Five years later, joining the Student Struggle For Soviet Jewry (SSSJ)  was my first participation in an issue to right a wrong.

Because of the deicide slander, the first Catherine ordered all Jews out of  Russia. Despite the ruling, many Jews lived and remained in Russia, which had Jewish communities since the 7th-century C.E. The third partition of Poland by its neighbors brought about 900,000 more Jews to the Russian Empire The Czaress Catherine The Great allowed Jews on Russian land. Still, they were restricted to the western areas of Russian territory, like Odessa.

In 1825, Czar Nicholas I ordered the conscription of Jewish youth into the Russian military beginning at age 12. Many of the youngsters were kidnapped by “snatchers” (“khapers”) in order to get them to spend their formative years in the Russian military. This had a significant effect in lowering the morale of the Russian Jewish community. The Jews that were not forced to spend decades in the military were often expelled from their towns and villages.

The other effect was to deny young Jews from learning their faith.

In the mid-1650s, anti-Semitic pogroms began in Russia and continued for several centuries. The pogroms were attacks on Jews by mobs of local people, Kind of like Al Sharpton in 1990s NYC.

Most Russian Jews believed the pogroms were planned by the government. In actuality, they were incited by the Russian Orthodox Church while the police watched and did nothing.

In the 1890s, my grandfather, his brother, sister, and parents wanted to leave. They needed to get to the nearby Black Sea without being seen. So one night, they snuck across nearby roofs until they got near the sea, where they got onto a ship headed to freedom in America.

As the communists took over the country, Lenin fought against Antisemitism and outlawed pogroms because it was a tool of the anti-Soviet right-wing forces. At the same time, he allowed purges of Zionists, which he saw as peddlers of capitalist poison.

At the beginning of his reign, Stalin consolidated his power with a massive purge of Russians. Jews weren’t particularly targeted in this mass murder. He supported Jews during the second world war because it helped him rally the country against the Nazis.

Rusia was an early supporter of the Jewish state, hoping that the socialist Ben Gurion would become a strong ally, perhaps even a satellite. They even had Czechoslovakia give Israel weapons during the war of independence.

Even though Russian Jews were loyal to Stalin, the dictator believed that the 2 million Russian Jews, especially the Jews in Crimea, would rise up against him. In his book The Whisperers: Private Life in Stalin’s Russia, Orlando Figes wrote”

But as the leadership of the emerging state proved hostile to approaches from the Soviet Union, Stalin became increasingly afraid of pro-Israeli feeling among Soviet Jews. His fears intensified as a result of Golda Meir’s arrival in Moscow in the autumn of 1948 as the first Israeli ambassador to the USSR. On her visit to a Moscow synagogue on Yom Kippur (13 October), thousands of people lined the streets, many of them shouting Am Yisroel Chai! (The People of Israel Live!)—a traditional affirmation of national renewal to Jews throughout the world but to Stalin a dangerous sign of ‘bourgeois Jewish nationalism’ that subverted the authority of the Soviet state.

Stalin tried to eliminate Jewish culture in the country and murder Jewish leadership. One of his last acts before he died. He ordered the murder of thirteen prominent Jews via a firing squad.  They were convicted of trumped-up charges of spying and treason. Five of the murdered Jews were Yiddish writers thus the night they were executed in October 1952 became known as the Night of the Murdered Poets,”

The murdered were members of the Jewish Anti-Fascist Committee (JAC), formed during WWII to get the Jewish world to support Russia.

After Stalin died (on Purim in 1953), the Soviet Union continued to suppress Jewish religious and cultural life, and hostility toward Zionism and Israel grew. Some Russian Jews secretly held religious services and tried to get exit visas. In most cases, the visas were refused, and the requesting Jews were punished and/or arrested.

The movement to protect the Russian Jews began to accelerate in the U.S. A slew of organizations were formed to help their brethren in the USSR. One of them is the SSSJ. As it grew, there were large peaceful protests. Over 10,000 people attended a rally in New York’s Madison Square Garden. Which is double the attendance when the Knicks are having a lousy year. 250,000 people marched in Washington DC, trying to get theU.S. government involved.

Perhaps the most notable legislative victory was the congressionally sponsored Jackson-Vanik amendment in 1974, which linked trade with Russia to freedom of emigration for Soviet Jews. As he did with most attempts to help Jews worldwide, Secretary of State Henry Kissinger opposed the amendment.

In the late 1980s, Russian leader Mikhail Gorbachev was looking for reconciliation with the West. During the discussion, American President Reagan made it clear that freeing up Jewish emigration would have to be part of the solution. Thanks to a President opposed by most Jew, the door to allow Jews stuck in the USSR began to open.

As you can see by the above, any attempt by Russian leaders to claim that Ukraine needs denazification is disgustingly hypocritical as the country has been anti-Semitic for centuries.

Oh, and as for the claim that Hitler had Jewish blood,  research says that claim is nonsense.

And while there is no proof this would happen. remember that scene near the end of Raiders Of The Lost Ark, when the evil people opened the ark, and their bodies began to painfully melt. IMHO if Hitler had Jewish blood, HaShem would make sure that the evilest man in history would have a similar fate, but it would be real for him.