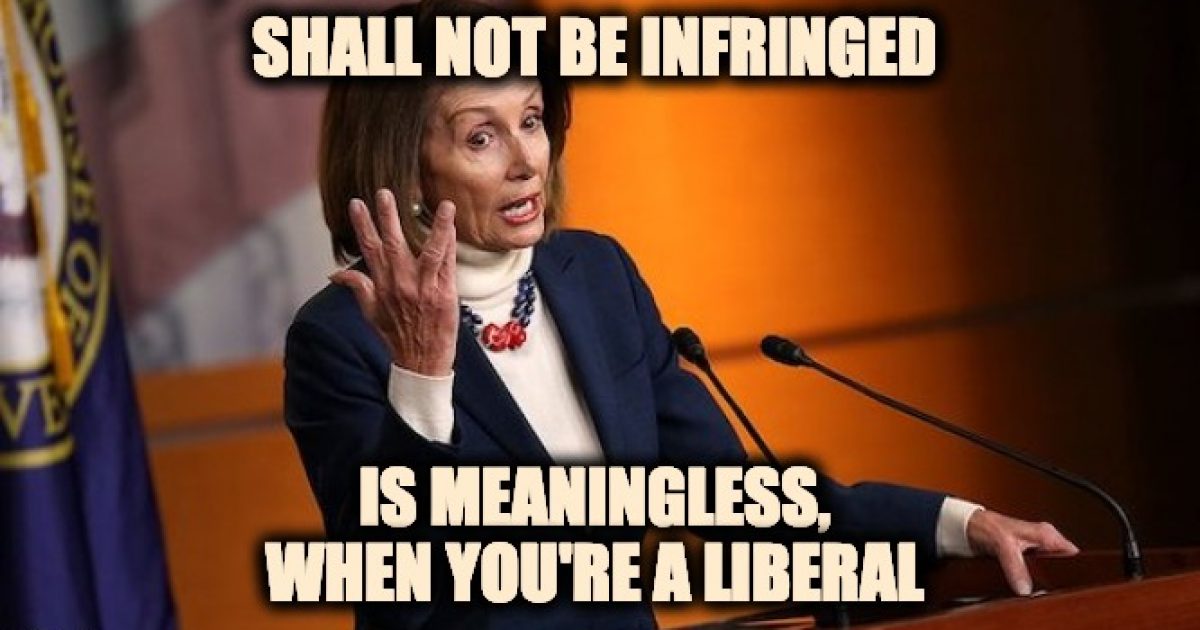 The Democrat-controlled House passed a gun control bill that would make the founders who wrote the Bill of Rights roll over in their graves. HR 1112, the “Enhanced” Background Checks bill, extends the time the government has to do a background check on a firearms purchaser. And that was apart from the “Bipartisan Background Checks” bill already passed the day before. It passed by a vote of 228- 198. The words “shall not be infringed” mean nothing to Democrats.

According to Bearing Arms:

“This new bill would give the FBI more time to conduct a background check, increasing the potential wait time from three days to ten. After ten days, the purchaser can file a petition to proceed with the transfer, but the dealer must then wait another ten days after the petition’s filing.”

Delaying the purchase of a firearm does absolutely nothing for preventing gun violence. But it could very well have a detrimental effect for many.

The problem with that is this: criminals have no restrictions and can shoot you to death any time they want. The bill also puts a limitation on veterans who might have PTS or PTSD.

Rep Dr. Phil Roe (R-TN), who is the ranking member of the House Committee on Veteran’s Affairs, stated,

“A little known and poorly understood provision of H.R. 1112 would amend the law to make it unlawful for an individual that has been ‘adjudicated with mental illness, severe developmental disability, or severe emotional instability,’ to purchase, possess a firearm…

“Although there may not have ever been a finding by a judicial authority that the veteran poses a danger to themselves or society, these veterans would be told that they were good enough to use a firearm to fight for our freedoms, but are not good enough to have the freedom to bear arms as a civilian.”

Here is his full statement:

One of the issues of the bill is that someone who has been a victim of domestic violence may have to wait so long that their life could be in jeopardy. The attempt of Rep Debbie Lesko (R-AZ) to introduce an amendment that would at least allow a victim of domestic violence the ability to purchase a weapon sooner was rejected by the Democrats because it’s the liberals who are conducting a war on women.

All in all the House Democrats – and any complicit RINOs – are trying to make good on their agenda to force gun control down the throats of America. The two bills are off to the Republican-controlled Senate – we can only hope they will be rejected there.
Cross-posted with Conservative Firing Line

This is the Problem: Good Cop Fired for Asking Fellow Cops to Respect the Rights of the People
May 27th, 2020 DC Clothesline

RIOTS: Ilhan Omar and Her Daughter Encourage Chaos and Mayhem in the Minnesota Streets
May 28th, 2020 Big League Politics

Looters Steal ‘TV’s & Groceries, Clothes’ After the Death of George Floyd In Minnesota (Watch)
May 28th, 2020 Flag And Cross

Texas: Citizen Journalist Busts Mail-In Voting Fraud – Alleges Rep. Sheila Jackson Lee & Others Paid Convicted Forgers
May 29th, 2020 DC Dirty Laundry
Thanks for sharing!
We invite you to become a Lid insider. Sign up for our free email newsletter, and we'll make sure to keep you in the loop.
Send this to a friend