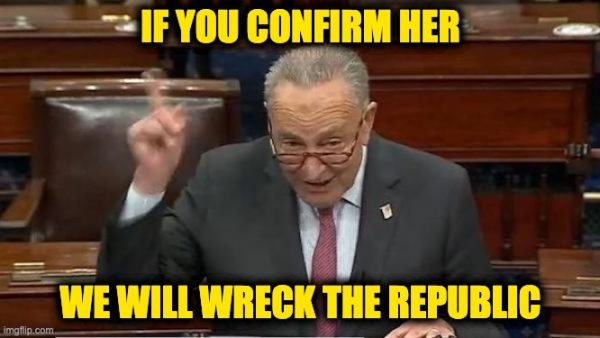 The final vote was 52-48. Amy Coney Barrett was confirmed as an associate justice of the Supreme Court. Only one Republican, Susan Collins of Maine, sided with Democrats, and even that one was most likely pre-approved by leadership to help with her re-election effort.  With the confirmation vote, Democrats began to blow their mental fuses and vowed revenge. Democrats vowed revenge

Senator Mazie Hirono (D-HI), whose most recent contribution to the Senate included asking Barrett if she “ever made unwanted requests for sexual favors, or committed any physical or verbal harassment or assault of a sexual nature?”  and scolding the future justice for using the term sexual preference instead of sexual orientation. Instead of promising retribution, Hirono decided to act like a child during the Justice Barrett vote. Instead of voting no, she walked up to the front of the chamber, voted “hell no,”  gave a thumbs-down gesture, and left the room. There is no record of the senator picking up her ball and taking it with her as she went home. 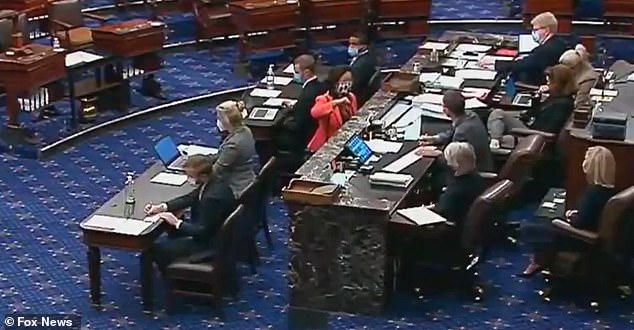 Many Dems reacted to the vote by threatening to pack the court and permanently making the SCOTUS progressive legislature creating laws instead of evaluating their constitutionality.

Senate minority leader Chuck Schumer lost it so bad, he almost wore his glasses the right way. He told the Republican Senators, “You will never, never get your credibility back,”  He added that this confirmation will never blow over. The GOP will have no right to tell Democrats how to behave when they have the majority. And the hyperbolic, “It will go down as one of the darkest days in the 231-year history of the United States Senate.”

Senator Stolen Valor Blumenthal (D-CT)  bloviated on the Senate floor: “The fact is that our Republican colleagues are shattering the norms and breaking the rules and breaking their word, and there will be consequences. There inevitably are consequences when one person breaks his or her word to another.”

Senator Markey (D-MA) blasted originalism, which Justice Barrett believes is the way to decide the Constitutionality of laws. Originalism is the legal theory that believes the country’s founding documents are meant to be interpreted exactly as they are written by justices, policymakers, and the American public.

With those words, Senator Markey was saying our founding documents were sexist, homophobic, and racist.

In the house, Speaker Pelosi, along with squad members. Alexandria Ocasio-Cortez, Ilhan Omar, and Rashida Tlaib called for taking revenge by packing the Supreme Court in light of Barrett’s nomination.

"Should we expand the courts? Let's take a look and see. Maybe we need more District Courts as well." pic.twitter.com/Zh4rDQ6b5m

By expanding the court we fix this broken system and have the court better represent the values of the American people.

We are going to take back the White House & Senate next week with a resounding mandate from the people to fight back against Trump’s illegitimately stacked judiciary. We must expand the Court if we’re serious about the transformational change the people are crying out for.

James Madison warned us in Federalist #47, “The accumulation of all powers, legislative, executive, and judiciary, in the same hands, whether of one, a few, or many, and whether hereditary, self-appointed, or elective, may justly be pronounced the very definition of tyranny.”

Packing the court would have that effect, destroying the separation of powers dictated by the constitution and removing the court’s checks and balances on the legislative and executive branches.  Not only will it hand the power of the people to the political establishment, but it will turn the U.S. into a one-party system. If the Democrats can turn the District of Columbia and Puerto Rico into States, which they also threaten, adding four more Democratic Party Senators, the one-party system will become permanent.

The Democrats have totally “lost it” with the confirmation of Amy Coney Barrett as a Supreme Court Justice. They are promising to take revenge with actions that will be destructive to the American republic’s health and undermine our self-government system.  American patriots have only a few days to prevent this destruction. Only by voting against Democratic candidates can we stop this unhealthy scheme to destroy the American Republic from the left.