News Flash: Democracy Has Already Been Undermined By The Left’s Behavior Since 2016 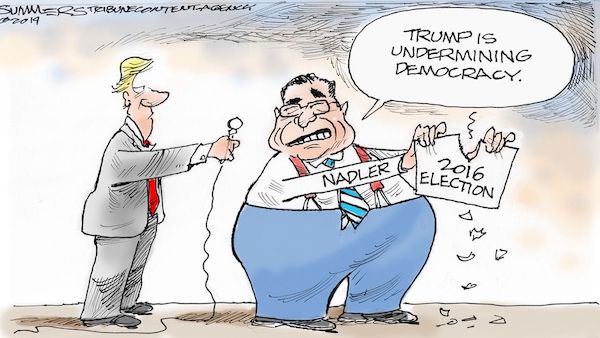 If one thing has been a repetitive propaganda theme since July 2016, it’s that the American people’s faith/belief/confidence in “democracy” and/or “our democratic institutions” is in danger of being undermined by something Trump/Republicans/conservatives (and of course Russia) are doing. democrats undermined American democracy

It always seemed to take the media and Democratic politicians to point the mischief out.  If they didn’t, no one would think there was anything nefarious and democracy-undermining going on when memes were shared on Facebook.  People would sensibly recognize that Hillary Clinton is not being hauled off to prison in an orange jumpsuit, regardless of what silly images someone posts.  Folks would continue to think whatever they already thought about what she may be guilty of, what Donald Trump’s character is etc., etc.

Over-caffeinated twenty-somethings trolling social media from anonymous office buildings in St. Petersburg (the Russian original, not the one with the MLB team) really don’t have the power to steer the American vote with memes and illiterate blog posts that do nothing more than reflect sentiments Americans already hold.

Being scared about this, feeling “democracy” to be undermined by it, requires imagining that it’s happening.  It’s not even clear it ever really did.  Sure, memes were posted on social media by “inauthentic” accounts, if we can believe Facebook and Twitter.  Let’s stipulate to that so we can move on.  But it turned out in 2016 that hardly any of this trolling fare posted by Russian actors was seen before the U.S. election. Your vote can’t be influenced by something you haven’t even seen.

Analysts have argued, in fact, in the years since 2016, that the real electoral influence of Big Tech is wielded by the companies themselves and that it favors left-wing candidates by suppressing right-wing content, underserving right-wing users, and delivering left-wing content even where users don’t particularly care to see it.  (I can take or leave this analysis; in general, I don’t believe voters, per se, are as readily manipulated that way as they are postulated to be.  Students doing homework and online shoppers probably are.)

Oddly enough, we wouldn’t have been presented with that analysis if the media and Democrats hadn’t spent the entire Donald Trump presidency touting the theory of “Russian collusion.”  They claimed the outcome of the 2016 election was invalid – had been compromised, undermined, cooked – by some combination of (apparently) Trump making phone calls (which then had to be monitored), campaign volunteers not actually, as it turned out, having anything to do with Russians hawking Hillary’s emails (but being spied on as if they did), and hapless Americans being exposed to content on social media (which required indicting and then dropping charges against Russians), while an evil data analytics company did exactly the same thing with social media user information that companies had done in 2008 and 2012 (which then required attacking the company, severing an investor’s relationship with Breitbart, and weaving enough plotlines through this little subplot to keep a soap opera going for 500 years).

There was no making head or tail of how this combination of factors supposedly affected the 2016 vote.  No rational theory was ever advanced.  How it could possibly have done so remains a mystery.  But Democrats and the media have spent five years trying to convince the public that these factors have a terrifying relationship, in some way, with undermining our confidence in democracy and our democratic systems.  There’s no way to put it that’s more straightforward or tangible because it’s off-puttingly intangible and never gets any better.  It’s meaningless drivel that makes no sense.

Here’s the key point, though.  The ones who seem terrified are the Democrats and the media. Everyone else is hanging in there, fearlessly facing down the Attack Memes and the untoward exposure of pilfered Democratic emails, which were actually seen by maybe 3-4% of all the American voters there are on the planet.  (Who thinks anyone but committed right-wing bloggers and other new-media professionals bothered to read all those emails between John Podesta and DNC staffers?)

That brings us to 2020 and into 2021.  What sparked this current article was another one by Michael Anton at American Greatness, published on 23 February.

Entitled “Why Do the Election’s Defenders Require My Agreement?”, it poses the question of the hour.  Why do those whose political stance is based on believing the 2020 election was overwhelmingly fair and produced a valid outcome require a catechistic confession of belief by skeptics in the validity of the electoral result?

It’s quite absurd to suggest that it’s because people who know the skeptics think the skeptics will storm into the streets and commit mayhem.  That thinking would be insane.  It would be to harbor paranoid fantasies that have no basis in reality.  Michael Anton’s friends, and even his casual interlocutors, know perfectly well he’s not going to do any such thing.

Anton expresses my sentiments about the 2020 election pretty well.  I don’t “believe,” based on assumptions, that Trump won the election.  I don’t “believe,” without investigation, that the piles of evidence that it was rife with irregularities are meaningless and not worth investigating.  What I “believe” is precisely that they should be investigated.

There’s nothing I can do about the fact that they weren’t investigated by government authorities in the process of certifying the vote.  Like Anton, I’m not pressing for a cataclysmic political disruption to roll back the clock on that.

But neither can I “believe” in something. There are so many good reasons not to believe in.

The hinge point, in fact, is right there.  The “defenders of the election” require an affirmation of belief about something no one should be required to affirm merely on belief, as defined by a political catechism.  Stacey Abrams of Georgia, for example, has never been harangued to affirm her belief that Brian Kemp won the 2018 election.  I would not demand it of her, as little as I think she has any justification for her view. 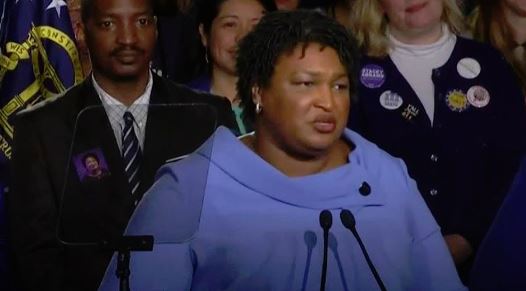 The same is true of Hillary Clinton, who has frequently implied or even asserted that she was robbed in 2016.  I sleep fine at night, knowing she still feels that way.  I don’t need her to validate my own view, which is that Trump won the electoral college vote by concentrating on a handful of swing states and was constitutionally entitled to be declared the winner.

They weren’t.  But there have been numerous, credible reports of voting irregularities – including outright, indisputable violations of state voting laws by state and local officials – surrounding the 2020 election. 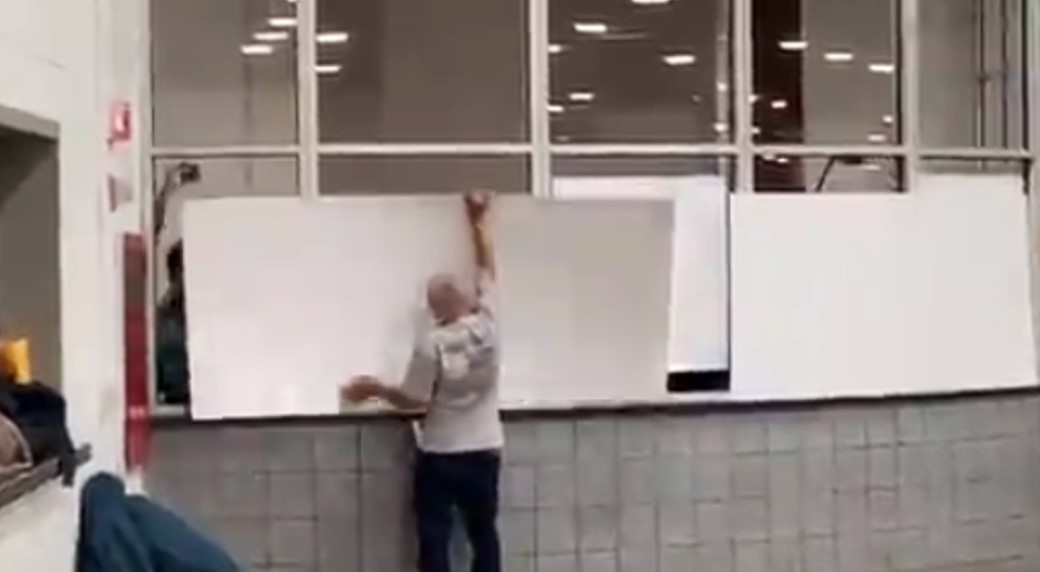 In 2016, elements of the federal government appeared to have colluded with the media to abuse government intelligence capabilities and concoct a fantastic smear campaign against the candidate who was elected president.

That, per se, doesn’t undermine one’s faith in democracy (if we are using democracy to mean widespread access to the franchise, with few qualifications, as the basis of consensual governance.  America is a constitutional republic; our civic attitude toward democracy is meant to be tempered and clear-sighted, not sentimental and based on occult belief).

No: for rational people, the 2016 Russiagate/Spygate dramas undermine faith in government.

But 2020’s election most certainly undermines faith in democracy – not because people have questioned the outcome, but because the putative winners have been so insistent that the electoral win not be inspected.

It’s the refusal to subject “democracy” – voting, the administration, and use of the franchise – to rigorous review that undermines “faith” or “belief” or “confidence” in it.

When the refusal to investigate turns into a demand for formulaic, faith-based affirmations – “Do you renounce Satan and all his works?” – and no tolerance for skeptics, “democracy” starts to look like something that requires dangerous levels of coercion to shore up.

That’s no way to govern ourselves.  The fatal question about “our democratic institutions” has already been answered, and it’s not looking good for the institutions.  As they operate today, they refuse to be inspected and accountable.  They are hedged about by phalanxes of helpers who, instead of agreeing to transparency and fairness, demand unmerited, litmus-test affirmations about facts, based not on evidence but on “belief.”

That’s, in effect, what the Left says “democracy” is.  Something we are to believe can’t elect Donald Trump, for psychotically unintelligible reasons, but that we are to believe must elect Joe Biden, no matter how much has to be overlooked to accept that result without investigating it.

My belief is reserved for the principle that we shouldn’t have to overlook all the irregularities cataloged in the 2020 election.  Full stop.  To demand some other response from me, or from millions of other skeptical Americans, is to undermine the idea of “democracy” entirely.  An uninspected, unaccountable vote isn’t democratic at all – and insisting on hollow affirmation of one certainly isn’t.

It’s not the demand to investigate the irregularities that undermines democracy.  It’s the refusal to.  And that deal is already done.