Democrats Accused Trump Of Treason, But Who’s Treason Was It? 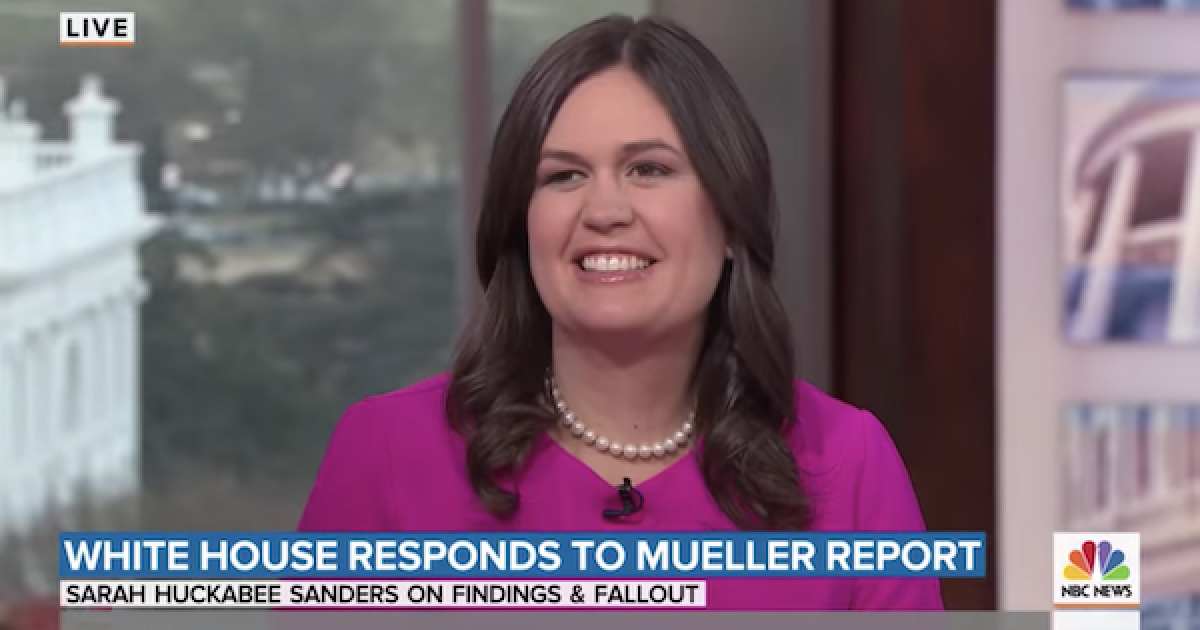 Sarah Huckabee Sanders swung back hard on Monday at NBC’s Savannah Guthrie in an interview in which Guthrie asked if Trump owed an apology to Robert Mueller.

“For the last two years, the president has absolutely eviscerated Bob Mueller, a lifelong public servant, a former Marine, a registered Republican, I might add” Guthrie said to Sanders. “He’s called him a national disgrace, discredited, a prosecutor gone rogue who oversaw a gang of thugs.”

“Did Robert Mueller deserve better from the president than this kind of language and behavior?” she asked.

The short summary of Sanders’s response would be “No.”

In her longer one, Sanders argued that the American people deserved better than what they got from “Mueller, the Democrats, and the media.”

Guthrie tried to press the issue, and Sanders let fly:

“Are you kidding?” Sanders responded, saying that Trump’s rhetoric “matches” that of the media and Democrats.

“[They] have called the president an agent of a foreign government,” Sanders added. “That is an accusation equal to treason, which is punishable by death in this country.”

Sarah Sanders: "They literally accused the President of the United States of being an agent for a foreign government. That's equivalent to treason. Thats punishable by death in this country." pic.twitter.com/nz5fsKTW7F

There may be an inclination to allow this kind of commentary go, and without too much notice.  Some on the left are no doubt “triggered” by it (others, of course, would say Sanders is putting the case too mildly, and of course Trump is guilty of treason).  Many on the right would point out that the Mueller report seems to place such suspicions – even unarticulated suspicions – to rest, and it’s time to move on.

There is even an analogy to be made to numerous claims from overheated pundits during the Obama years that Obama was a traitor, and the agent of one foreign entity or another.  Similar claims were made about George W. Bush during his eight years.  The level of American political discourse has been declining sadly over the last quarter century.

But there’s a reason why Sarah Sanders’s point has unique merit and needs to be taken seriously.  It’s because, in Trump’s case, the accusations that amounted to a brief of “treason” against him were not merely made by pundits, late-night comedians, or disgruntled voters.

The accusations were funneled into agencies of the U.S. government, with the complicity of federal officials, and actually pursued through abuse of the powers of government.

The Mueller report, after 22 months, concluded the most important thing we know about the whole Russiagate saga, which is that there was no underlying crime.  It’s not just that Trump and his associates weren’t guilty of anything.  It’s that there wasn’t anything to be guilty of.  There was no dead body, no missing person, no victim with bruises or stab wounds, no broken lock, no smashed window, no shelf stock or funds missing or child abducted.

There were, we are told, Russians who committed online theft by penetrating the DNC computer system and making off with emails, and other Russians who committed fraud to post political themes on social media for American consumption.  But no additional “crime” resulted from these activities.  They can’t be proven, and haven’t been proven, to have had any effect on the U.S. election.  Indeed, speaking in tones of outrage as if they might have had an effect is the conversation of a lunatic.  (Seriously: “The Russians hacked DNC emails, which hardly anyone in America ever read, and that caused tens of thousands of people in Michigan and Wisconsin to vote for Trump”?)

The lack of a crime, or even a meaningful problem, has been evident all along.  But until the formal conclusion was forwarded by Mueller, impassioned believers in the Russiagate narrative could keep their hopes alive.

They no longer can, and there is no excuse now for not accepting the blunt truth.

There is nothing there.  There never was.

But top officials from the Obama administration’s National Security Council, and officials of the U.S. Departments of State and Justice, of the CIA, the FBI, and the Office of the Director of National Intelligence – all were involved in processing ill-sourced “information” through the formal apparatus of government power in order to build a brief of “treason” against the Republican candidate who was elected president: Donald Trump.

They abused the resources of the U.S. government to do this.  Their purpose was manifestly not to look into something they thought was legitimately wrong.  If it had been, they would have done different things.  Obama, instead of alternately assuring Americans in 2016 that there was no threat to the election, and then musing vaguely that there might be, would have marshaled resources to literally protect U.S. voting systems.  Instead, his officials in the summer of 2016 proposed ways to extend federal administrative power over the states’ voting systems in the future.

Likewise, if there was a question that the Russians might be trying in 2016 to suborn treason from officials of the Trump campaign, the Obama agencies could and should have confronted Trump with that information directly.  They did not.

Instead, they labored to develop at least one confidential source inside the Trump campaign organization, to spy on Trump from within.  They also used opposition research compiled for Hillary Clinton and the DNC to get a warrant to spy electronically on the Trump campaign.  They spied on Trump and his associates for months, including retrieval of their targets’ personal communications that would have gone back for years.

Furthermore, they used the authority of the highest government officials to unmask the identities of Trump associates (and probably Trump himself) in communications ostensibly retrieved for national security purposes.  They did this for months as well, perhaps as early as 2015 and certainly in 2016.

In all these efforts, some of which continued into 2017, they quite obviously never found evidence of wrongdoing related to Russians or the election.  We’d know it if they had.

The Democrats and the media have also, since Obama left office, used the fact that his administration had done these things as “evidence” that Trump and/or his associates must have done something.  That inverted logic has actually been the premise they have spoken from for more than two years.

Sarah Sanders says Democrats and the media leveled an accusation against Trump that is the equivalent of treason.  But given what we know at this point, it’s more accurate to say that they, and the Obama administration, tried to frame Trump for treason.

So this one can’t be swept under the rug and forgotten.  This one matters.  It wasn’t just a matter of cranks with a few too many beers in them calling the president a traitor on a Friday night.  This was federal officials with the power to use the tools of government spying on people, dragging them in for questioning, bringing them to financial ruin, and getting them indicted and convicted on process crimes in an effort to create something that did not exist: a reason to railroad a duly elected president out of office.

Sarah Sanders has every reason to state the case as starkly as she did on Monday.  Senator Lindsey Graham on Monday called for an investigation of the special prosecutor’s probe and what lay behind his appointment, and he is right to do so.  Senator Rand Paul made the same call, emphasizing that we need answers about everything the Obama administration did in this matter.

It is about high crimes and misdemeanors.  It’s just not about Trump.