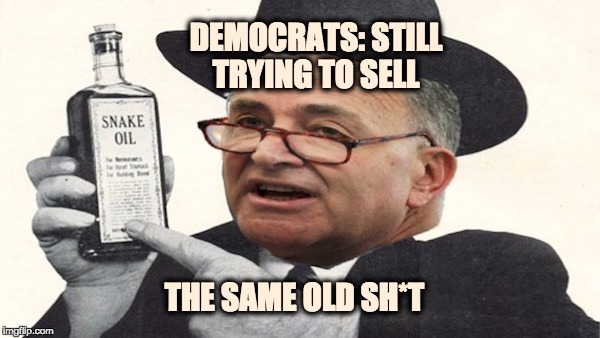 Note: While this was written before the firing of FBI director Comey, it is even more relevant after Tuesday’s action and the subsequent Democratic Party reaction.  Many of the same Democrats who called for the resignation of James Comey a few months ago are now saying that Trumps move was horrific, including Chuck Schumer who had said he lost confidence in Comey in October but was a conspiracy theorist on Tuesday. So when you read the post below keep in mind that the Democrats are still trying to sell the same nonsense.

The Democrats keep telling us how wrong the Right is. How wrong Republicans are for America. And how Republicans hate illegals, clean air, clean water, and so much more.

I say, it’s the Democrats that have lost their way. It’s the Democrats who hate America. “Elitism” is not only owned by Democrats, but is actually being perfected by them and is shining brighter in their outrages since the election.

Americans as a whole rejected Democrat policies and foundations. Now the first thing my Dem friends will say is that Clinton won the popular vote. I know so what! She won the majority of votes in the very Liberal inner city areas. Large, densely populated, Democrat cities (NYC, Chicago, LA, etc) don’t and shouldn’t speak for the rest of our country.

This is why the Electoral College works. It keeps a very concentrated group of people from having way to much influence on an election. Americans as a whole, and with EQUAL votes and rights, rejected those policies BIG TIME!

AllenBWest.com shared the following statistics that pretty well paints the picture as to why the Electoral College concept was sheer genius:

These 5 counties alone, more than accounted for Clinton winning the popular vote of the entire country.

When you have a country that encompasses almost 4 million square miles of territory, it would be ludicrous to even suggest that the vote of those who inhabit a mere 319 square miles should dictate the outcome of a national election.

You did it to yourself. Even Bill Maher has now scolded you several times for going too far Left for not acknowledging your shortcomings. MSNBC host Chris Matthews said the Democrat Party has moved too far to the Left on cultural issues. Former Presidential candidates Jack Webb and Bernie Sanders think the Dems went WAY too far Left, too fast.

Many other Left-wing progressives have come out and scolded you for moving too fast in one direction. In speaking to a young Democrat myself last week he said he had no problem “mandating” some of the Democrats’ platform issues. REALLY?

Well guess what? Your items aren’t selling. I think this is why Democrats hate capitalism so much. Capitalism requires that you sell or make a product that people actually want to buy in order for the company become successful. Democrats “product” isn’t selling. The cheap varnish is wearing off. The same old carnival barker lines, “Step right up! This product cures everything from restless sleep to cancer,” doesn’t sell anymore because it’s been proven not to work. Cities run by Democrats are always in debt and deficit spending. Detroit, Baltimore, and Chicago are among hundreds, but those are the poster children for how the Democrats run cities.

So the answer for the Democrats? Elect a farther Left DNC chairman who made it clear that if you’re pro-life this is not your party! Then Keith Ellison as DNC vice chair said he will only take the party further Left. And let’s not forget the wonderfully successful Nancy Pelosi. Under Nancy and Obama’s leadership, the Dems lost over 900 legislative seats, more than any other time in Democrat history. And still, Democrat leadership voter her back at the helm! Isn’t that like making the worst player on the team the coach?

For a Party that lost its base and direction, who claim to be completely in tune with the American people, they are sure tone deaf.

So please keep selling your same old wares using the same old marketing plan with the same leadership and I will rest easy at night knowing you are living in a delusional vacuum that you somehow perceive to be reality. That will continue to keep true Patriotic, America-loving citizens in power.