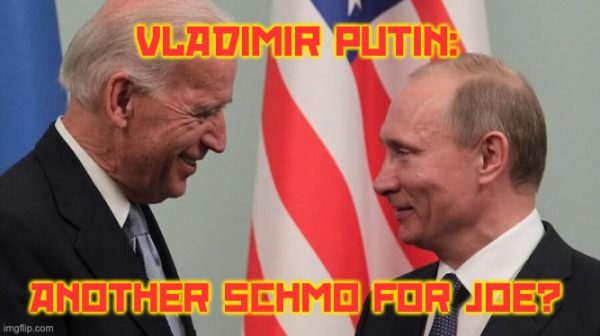 Russian President Vladimir Putin said he is prepared to work with either man who wins the election but noted Democrats share an “ideological basis” with Russia and that those ideas gave rise to the Communist Party. democrats share Russian ideals

Putin made the comments in an interview with state-run Rossiya TV.

“As for the Democratic candidate, what can I say? We can hear rather sharp anti-Russian rhetoric, as well,” Putin said. “Regrettably, we have become used to this.”

“But … the Democratic Party is traditionally closer to the so-called liberal values, closer to social democratic ideas, if compared to Europe,” he continued.

“And it was from the social democratic environment that the Communist Party evolved.”

Putin denied accusations by United States intelligence agencies that his country has interfered in American elections, a highly disputed contention.

He went on to whine that President Trump has been very hard on Russia.

Putin said that, while their current administrations have been involved in creating “positive steps … taken to build Russian-American relations,” the President has been behind some very strict actions.

“The greatest number of various kinds of restrictions and sanctions were introduced during the Trump presidency,” he claimed.

“Decisions on imposing new sanctions or expanding previous ones were made 46 times.”

The myth that Donald Trump is Vladimir Putin’s puppet just won’t die, even though ample evidence demonstrates that the president’s policy toward Russia has actually been surprisingly hardline and confrontational. https://t.co/25RcGFZELB

In February, Trump announced that he would remove the United States from the INF, an arms control accord signed by then-President Ronald Reagan and Soviet leader Mikhail Gorbachev in 1987.

The reason the U.S. withdrew was that the Russians didn’t comply with the agreement:

Dating back to at least the mid-2000s, Russia developed, produced, flight-tested, and has now fielded multiple battalions of its noncompliant missile.  The United States first raised its concerns with Russia in 2013.  Russia subsequently and systematically rebuffed six years of U.S. efforts seeking Russia’s return to compliance.  With the full support of our NATO Allies, the United States has determined Russia to be in material breach of the treaty and has subsequently suspended our obligations under the treaty.  Over the past six months, the United States provided Russia a final opportunity to correct its noncompliance.  As it has for many years, Russia chose to keep its noncompliant missile rather than going back into compliance with its treaty obligations.

The United States will not remain a party to a treaty that is deliberately violated by Russia.  Russia’s non-compliance under the treaty jeopardizes U.S. supreme interests as Russia’s development and fielding of a treaty-violating missile system represent a direct threat to the United States and our allies and partners.

Despite Complaints of Russian Aggression, Democrats Want to Defund the Pentagon

It is a particularly odd message for a party that has consistently warned of a threat from Russia ever since President Trump took office, a party who doesn’t believe he has been tough enough on Putin.

The Senate Budget Chair after defunding the Pentagon pic.twitter.com/UILrEVrMBZ

Putin explains that Trump’s withdrawal from the INF “was a very drastic step” and “a big danger to international stability and security.”

The Pentagon might be crucial in dealing with that kind of threat.

During the Democratic primary debates, then-candidate Michael Bloomberg blasted Senator Bernie Sanders and the rest of the party’s plans to dismantle capitalism – which is really a total government takeover of the economy.

“This is ridiculous,” Bloomberg chafed. “We’re not going to throw out capitalism. We tried that. Other countries tried that. It was called communism, and it just didn’t work.”

Putin seems to agree that Democrats are closely aligned with his ideals.