Majority of Democrats Are Saying ‘No’ to Biden 2024 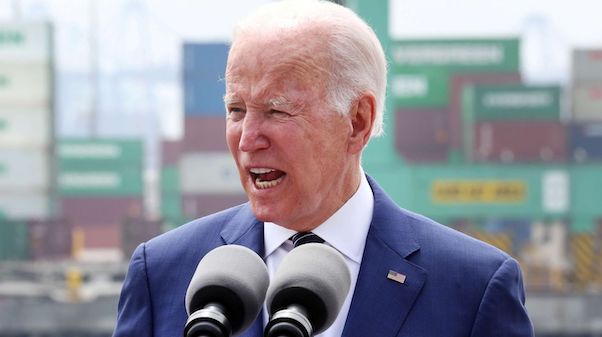 A majority of Democrats polled just gave Joe Biden a Christmas gift that he will not be all that pleased to accept as respondents revealed that they do not want him to run for re-election in 2024.

Most of those who claimed to be Democrats in the recent CNBC All-America Economic Survey said “no thanks” to a return performance by old “Uncle Joe” for 2024, CNBC reported on Monday.

Even as many Americans feel Biden isn’t really the one in charge at the White House, the numbers are also bad for Biden when you drill down to just the Democrat respondents.

CNBC noted that 57 percent of those who said they were Democrats said they don’t want Biden to run for re-election. That result is what is called “underwater.” And it isn’t the first time.

Even worse, the vaunted independent vote is also anti-Biden, with 66 percent of the independents polled saying they are not a fan of the current president and don’t want him to run again.

Still, if both Trump and Biden are once again their respective party’s nominees, they appear to have healthy opposition inside their own tents. More Democrats oppose Biden than Republicans who oppose Trump, but Trump also finds 37 percent of respondents who identified as Republican saying they don’t want him to run again, along with 61 percent of independents.

Biden’s age and mental acuity seem to be a major sticking point among many in the CNBC poll. 47 percent said that age was a major factor in why they think he should retire after one term. But there is a split among Democrat voters on the 80-year-old president’s age. 61 percent of Democrats who don’t want Biden to run again cite his age. And 66 percent of respondents who are seniors said the same. But only 43 percent of the 18-49 age group cited his age as the reason they don’t want him back.

The CNBC poll of 801 Americans nationwide was also conducted Nov. 26-30, long after the red wave fizzled during this year’s general election. The poll has a margin of error of +/-3.5%.

As Breitbart News noted, many Americans doubt Joe Biden is “all there” these days. A growing number have demanded that Biden take a cognitive test, citing suspicion that he has Alzheimer’s disease.

“Polling reveals 58 percent of Americans believe he should receive at least a cognitive test. Less than 25 percent of voters strongly believe Biden is mentally fit, healthy, and stable,” Breitbart reported.

Age is far from Biden’s only problem. Indeed, he is underwater in nearly every important metric, especially the economy.

“Just 20% of the public think the Biden administration’s efforts to ease inflation are helping, a five-point decline from October; 28% believe they are hurting, a two-point decline, and 49% say they’re not making much difference, a 7-point jump,” CNBC reported.

His overall approval ratings have also dipped below Donald Trump’s, the president Democrats and the media claimed was the most unpopular President in U.S. history.

Biden is also finding problems appealing to particular blocs of voters, too.

In May, a poll found Biden is in deep trouble with Hispanic voters. At the time, a Quinnipiac poll revealed that a dismal 26 percent of registered Hispanic voters approved of the Democrat’s job performance.

In February, columnist Star Parker noted that Biden’s support among blacks, though stronger than his other voting blocs, is also softening, a bad sign for any Democrat.

In July, even CNN noted that the lives of blacks have not seen much improvement during the Biden era.

It has been claimed that Joe Biden was the “most popular” candidate ever elected to the White House. Whether you believe that proclamation or not, it is a fact that he has thoroughly destroyed the U.S.A. in two short years and went from “the most popular” to the president with the lowest job approval ratings in polling history, even lower than Trump, the man the left claims was the worst president ever.