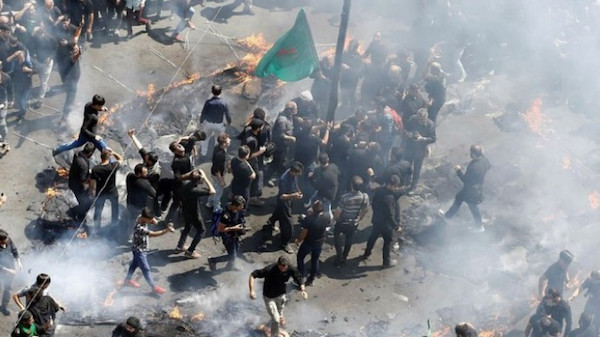 House Democrats on Tuesday blocked a vote on a resolution supporting Iranian citizens protesting against the regime and being killed in the process. democrats resolution Iran

Proving once again that there is no level to which the resistance party will not stoop to block any perception of good coming from this administration.

The resolution, brought forth by House Minority Leader Kevin McCarthy, would have “condemned the Government of Iran for killing 1,500 Iranian citizens who were protesting their government,” according to the Daily Caller.

It would also have “condemned the Government of Iran for shooting down Ukraine International Airlines Flight 752, killing 176 people.”

This is happening in Iran & yet Dems blocked @GOPLeader's resolution to express our support for these brave protestors.

The Iranian regime killed 1,500 of its own people in Nov., initially lied about downing the Ukrainian airliner, & is the lead sponsor of terrorism.

Democrats Siding With the Ayatollah Again

Isn’t it funny that when there is an uprising in the Middle East under Barack Obama, it’s praised universally and dubbed an ‘Arab Spring.’

But when brave protesters take on the hardliners in the Iranian regime under Trump, Democrats abandon them and pretend it isn’t real.

Numerous videos have cropped up on social media showing police in Iran shooting live ammunition into the crowd of protesters who were calling out the regime for lying about their involvement in shooting down the Ukrainian plane.

House Speaker Nancy Pelosi refused to admit what the protesters, many of whom were shouting ‘death to Khomeini,’ were rising up against.

“There are different reasons why people are in the street,” she coldly dismissed.

The Islamic regime in Iran formed from corrupt thieves. This is a truth that no one can ignore. In addition they spread terrorism in the world.
But why some "Americans" support these corrupt thieves?
This is something that needs serious investigation.#NancyPelosiFakeNews pic.twitter.com/AiOOlwK79M

As you might imagine, several Republicans were outraged over the resolution being blocked.

“What a disappointment —Democrats just blocked a vote on a resolution supporting the Iranian protestors,” McCarthy tweeted. “This is not the time for partisan politics. This should be a time for the US Congress to speak with one voice to condemn an Iranian regime that kills its own people.”

Rep. Tim Burchett (R-TN) also took to social media to blast Democrats for being unwilling to take a stand against the Iranian regime.

Why in the world are @HouseDemocrats blocking the @GOPLeader's resolution condemning this Iranian regime for obvious human rights violations? This isn't complicated. Let's stand up for the same basic right to free speech in Iran that we have here and vote on this resolution.

His defense still rings true, perhaps even more so after they blocked this resolution.

“It’s honestly pretty simple,” he wrote. “If you don’t want to be called an Ayatollah sympathizer, don’t sympathize with the Ayatollah.”

Democrats’ vote to block this resolution shows they’re still sympathizing with the Ayatollah while offering no sympathy for the Iranian people.