Democrats: The Party Of Racism 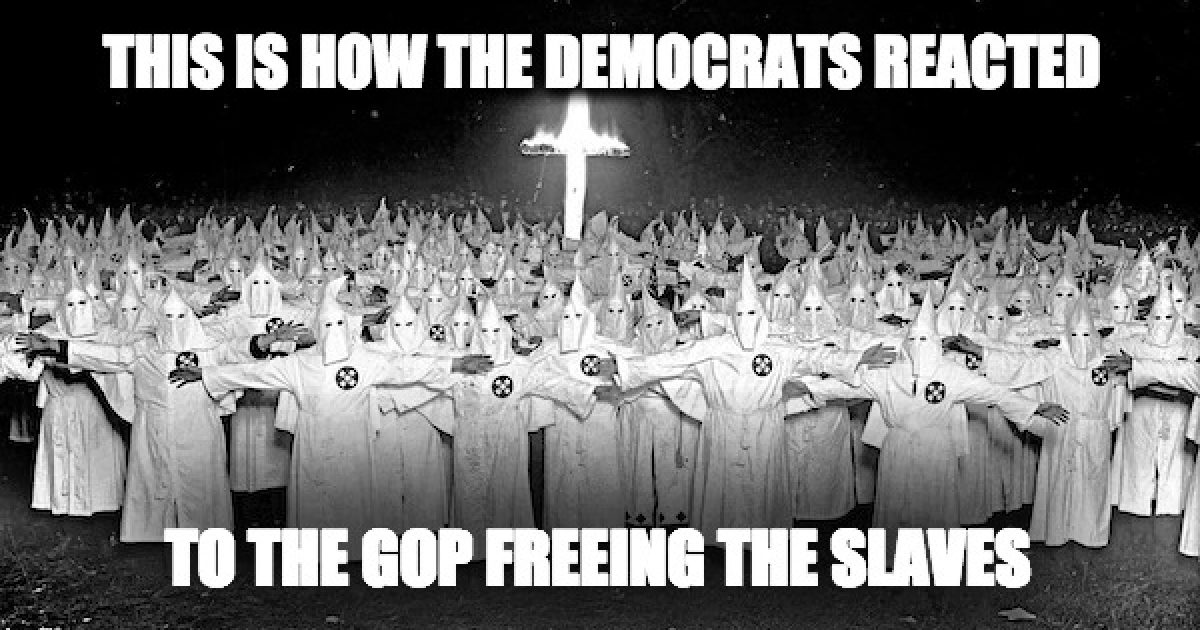 Did the Democrats just now notice the statues of the Confederacy? Have they been in a coma? All of a sudden they found self-riotousness over what “those people” represented. This is over the top hypocritical!

And please, don’t give me that line about the Parties changed sides! When, exactly, did that happen? During the FDR years? FDR was, and still is, a god to the Democrats. You know, the one who rounded up and interned Japanese, Italians, Germans and so on during World War II? No warrants. No due process. Nothing. Yup, American citizens! Ironic. And now they want to make up for it by giving NON-Americans all kinds of rights.

President Roosevelt appointed former KKK member Hugo Black to the Supreme Court! Pay attention now. As an Alabama Senator, Hugo Black filibustered an Anti-Lynching Bill. Hmmm. Hugo went on to write that Roosevelt spoke positively of the KKK and had many friends and supporters in it. During the Civil Rights movement, Hugo warned FDR that if he didn’t keep the Blacks in line it might get violent! He also stated, “unfortunately some people think Negros should have special rights under the law.” FDR would not allow the integration of whites and blacks in the armed services. I wonder how he would have handled transgender? Will we be removing his statue now too?

Maybe the Parties switched sides during the years of LBJ, a Democrat, who saw black people as being able to be played and had no problem calling them by the “N” word. (As a matter of fact, many of his close friends said it was one of his favorite words.) When LBJ was asked why he nominated Thurgood Marshall to the Supreme Court he stated, “When I appoint a “N” to the bench I want everyone to know he is a “N””. And his famous comment that once he got the Civil Rights Act passed, “I’ll have those “N’s” voting Democratic for 200 years.” Will we be pulling down his statue too?

Maybe the Party switch came in the 1970’s, you know, when Jimmy Carter, one of the biggest racists in your Party, well in any Party, was president. Jimmy, while serving on the school board in the 1950’s led the effort to relocate the site of a new black school. Why? Because, as he stated publically, the school was on the same side of the street as a white school and the kids would have to use the same sidewalk! The board later assured residents they would do everything they could to make sure the kids would not be walking on the sidewalk at the same time.

In 1976 the first black mayor of Gary Indiana, Richard Hatcher said Carter was, “a Frankenstein’s monster with a Southern drawl, a more cultured version of old Confederate at the school house door.”

Jesse Jackson, yes THE Jesse Jackson, called Carter “a throwback to Hitlerian racism.”Atlanta Mayor Maynard Jackson once exclaimed regarding Carter, “is there no white politician I can trust?”

Why would these people say this about Jimmy Carter? One of the most revered Democrats in history. Or was he Republican? I’m confused. I can’t figure out when they changed!

When the government was considering using “public housing” to integrate neighborhoods, Jimmy Carter stated, “I have nothing against a community that is made up of people who are Polish or Czech or French Canadian or black trying to maintain the ethnic purity of their neighborhood this is a natural inclination.” I’m guessing his statues need to come down too. Will we also be taking his name off of schools?

Maybe that Party switch came during Billy Bob Clinton’s reign! Bill has been touted as the single most effective president at increasing the black prison population because of his 1994 Crime Bill. Many in the black community believe he was trying to appease white Republicans whose vote he needed. So if he did that, wouldn’t that make him a racist? Or at the very least, a phony?

But what I really want to tackle is the ongoing, continual accusations of sexual assault by Billy Bob that seem to be totally acceptable to the Left. While governor, his troopers, and guards went and picked up women for him. (Google it.) When one woman went to her grandmother with the issue she was told, “You can go to your boss with it, but honey, he is the Governor. Be careful.” As the Governor, no one stood a chance. And back then, she and the others might have been blamed or accused of being a willing participant. But if they were all false, then why did he pay them to go away? I found 2 different reports. One identifying 11 different women, the other 7 with no names attached. State troopers had a running joke about the then-Governor who fancied himself as Mr. Lover! Was he a Republican who switched? And will we be pulling his statues down?

Then there is Ted Kennedy. Womanizer and “alleged” murderer. I guess we have to define murderer. Actually I’m not going to if you don’t know what one is then you shouldn’t be reading this piece. After a night of drinking Ted Kennedy was giving a ride “home” to a Miss Mary Jo Kopechne when his car went out of control on a small bridge and into the water. Ted had the presence of mind to get himself out of the car, go back to his room, shower, clean up, go to bed, and THEN, when he got up in the morning, call the police. When the autopsy was done it was found that she drowned, which means he had time to save her if he would have simply tried.

There were rumors that Mary Jo was pregnant, but since that part of the story has no real evidence, I won’t accuse him of it. Ted was known for talking down to in a condescending tone those who he felt were beneath him, most notably, black people. This was VERY evident when he was in a confirmation hearing for Mr. Gerald Reynolds’ appointment to the Office of Civil Rights at the Department of Education. According to one Senator, Ted was explaining everything to Mr. Reynolds as if he was a child or unable to comprehend. You know, like you do when someone is “beneath you.” So, will we be removing his name and statues from places of prominence?

The arguments are disingenuous. The rage fake. And the moral outcry is just laughable. The Left marches hand in hand with Communist flag waivers (Google it) even allowing them to be shown at the DNC. Yet they are supposedly outraged by the Confederate flag and the American Flag?

They’re fine walking next to the Communist flag that represents the killing of 100’s of millions of people and the oppression of 100’s of millions more. Yet they find a perverted satisfaction in burning a flag that may have many negative frays in it, but along with all those frays are many, many, many more threads saving 100’s of millions lives! America has brought food and aid to many war-torn countries and aid to countries ravaged by natural disasters. And they’ve brought smiles and calm and peace and joy to many LEGAL immigrants coming to America for a better life for their families.

If it’s a Civil War they want, then bring it. The Good will prevail again! Their deceit and lies will not win, the light will shine on the darkness and drive them back under the rocks they climbed out from.