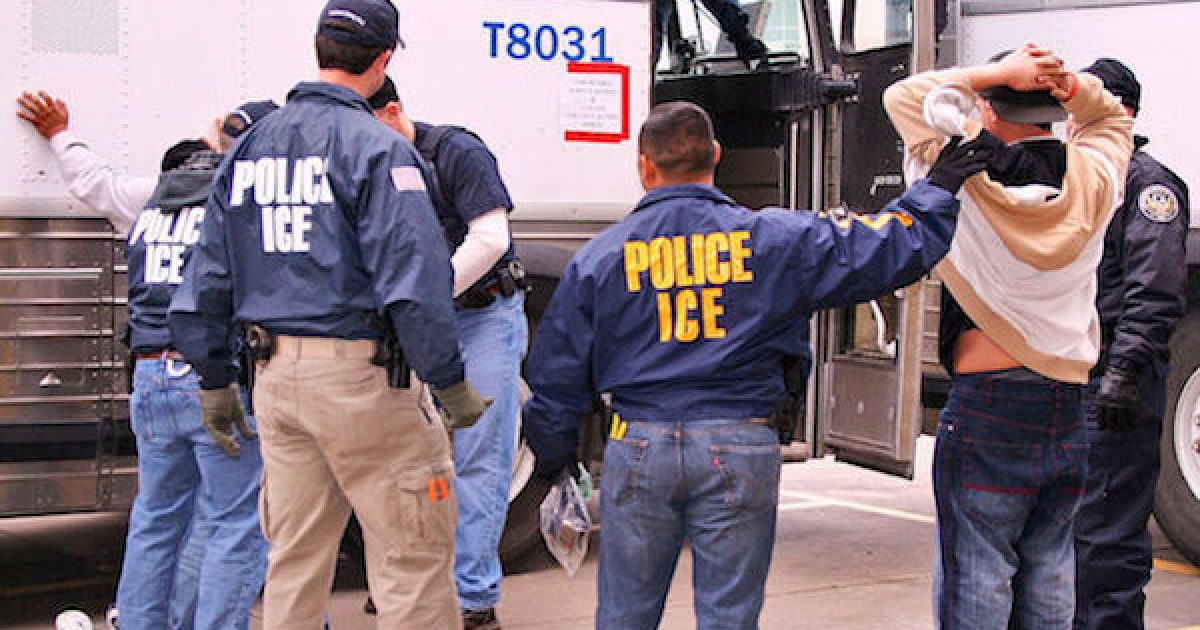 Many have assumed that this is just a loud-mouthed ploy to get the far left to line up for the 2018 elections. But the call has become so loud that now, that even some liberals are starting to worry that the ploy is going to hurt, not help the party on Election Day.

ICE enforces “federal laws governing border control, customs, trade and immigration to promote homeland security and public safety.” Established in 2003, its “largest single area of responsibility” is immigration but it is also in charge tracking down and stopping human smuggling and even preventing terrorism.

“You should get rid of it, start over, reimagine it and build something that actually works,” she told CNN late Thursday.

Other liberals soon joined in. California Senator Kamala Harris said we should eliminate ICE and “start from scratch,” and our favorite old socialist Senator from Vermont, Bernie Sanders, didn’t entirely go all in on the idea, but did say that the department needs to be re-imagined.

Then there is the media’s favorite new socialist, putative Democrat New York congressional candidate, and self-professed socialist, Alexandria Ocasio-Cortez who has ramped up the pressure on ICE.

As National Review reported, Ocasio-Cortez is calling for ICE to be abolished on her campaign website (my bold):

As overseen by the Trump administration, ICE operates with virtually no accountability, ripping apart families and holding our friends and neighbors indefinitely in inhumane detention centers scattered across the United States. Alex believes that if we are to uphold civic justice, we must abolish ICE and see to it that our undocumented neighbors are treated with the dignity and respect owed to all people, regardless of citizenship status.

As West quipped on Friday, “this is like saying that we’re going to stop the issue of police brutality by doing away with police departments nationwide. While technically it gets the job done, it also completely reshapes society in a way that would never, ever work.”

Conservatives fully understand that this idea is one of the dumbest ideas the left has come up with yet. Not only that, but you can bet that many of these Democrats listed above have no intention of following through and are just cynically using the idea of abolishing ICE as a campaign tactic to get the fools on the far left to vote for them during the coming midterms.

Still, one thing is sure. The idea is so foolhardy and radical, it could well split the Democrat Party in twain and drive its vote counts down, not up. At least that is what the far left BuzzFeed News is worried about.

The left-wing website went on to say that the Democrat Party is “suddenly dealing with an internal conflict over how to handle one of the agencies responsible for enforcing the country’s immigration law.”

The debate over abolishing the US Immigration and Customs Enforcement agency is pitting potential future party leaders against the Democratic old guard and against one another, as the party tries to find a winning message and platform against President Donald Trump.

“I think the focus should be on President Trump’s hard-line immigration policies, and not on ICE,” Texas Rep. Henry Cuellar, a relatively moderate Democrat, told BuzzFeed News on Monday. He noted the agency is just in charge of enforcing the administration’s policies, and said the calls to abolish ICE are “dangerously misguided.”

The idea is a big hit with hardcore leftists. But as BuzzFeed noted, more mainstream Democrats are becoming alarmed by the whole discussion:

But other Democrats in Congress are not only dismissing the idea but also suggesting the calls run counter to their party.

“We need border security, OK? I’ve heard there’s some people out there saying we should get rid of ICE. That’s kind of like Republicans saying we should get rid of the IRS,” Washington Rep. Adam Smith, the ranking member of the House Armed Services Committee, told reporters after last week’s elections. “We need immigration enforcement, though not like this. ICE does not have to do what President Trump is telling them to do.”

A Senate Democratic aide told BuzzFeed News “it’s important that the people who are calling to abolish ICE define what that means,” adding that otherwise it would just be a “reflexive slogan.”

Democratic congressional leadership has largely a cautious approach to the issue so far, either not commenting or suggesting reforms instead of outright abolition.

House Democratic leader Nancy Pelosi is calling for an “immediate and fundamental overhaul” of the agency, her spokesperson Drew Hammill said in a statement. Senate Minority Leader Chuck Schumer called for “reform” last week, but he reportedly noted it has “functions that are very much needed.”

“ICE is tasked with important responsibilities to keep America safe, but the policies they are pursuing under [the president’s] leadership do not reflect American values, including separating families at the border,” Mariel Saez, a spokesperson for House Democratic Whip Steny Hoyer, said in a statement to BuzzFeed News. She added that Hoyer “is focused on taking back the House in November, so that Congress can conduct greater oversight on the practices and effectiveness of ICE and enact comprehensive immigration reform.”

While “normal” Democrats may be worried that this radical idea is about to divide the party into one liberal party and a second extremist party and make them lose elections for decades to come, President Trump rightfully sees this as an issue to exploit.

“The Liberal Left, also known as the Democrats, want to get rid of ICE, who do a fantastic job,and want Open Borders. Crime would be rampant and uncontrollable! Make America Great Again,” Trump Tweeted a few days ago.

The Liberal Left, also known as the Democrats, want to get rid of ICE, who do a fantastic job, and want Open Borders. Crime would be rampant and uncontrollable! Make America Great Again

Hot Air’s Ed Morrissey has a great post at the Daily Beast explaining why the very idea of killing ICE is wrong. I recommend you give it a read. Click on the title and give it a read–> ‘Abolish ICE’ Is a Slogan, Not a Solution