Democrats Are The Extremists On Abortion; Don’t Let Media Tell You Otherwise 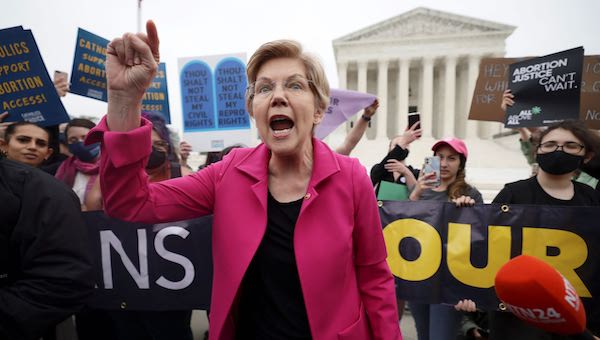 Facebook Twitter Flipboard
With their policies failing, the media is desperately trying to rehabilitate Democrats by declaring pro-life views as unpopular for upcoming elections.
c

But Democrats are the extremist, global outliers on abortion.

Nearly 95% of European countries, which leftists usually rush to cite on social matters, are in sync with most Republican politicians’ edicts on abortion limits today.

This means GOP candidates should not get soft on the issue, like Arizona U.S. Senate candidate Blake Masters did this week. Masters, another Trump-backed populist trailing in the polls, changed his views in the most feckless and transparent fashion.

Maybe we should expect this from a 36-year-old erstwhile libertarian venture capitalist, but it’s troubling, and right-leaning media and talk radio would normally be irate at his squishiness.

Did Team Masters believe the apocryphal narrative about a murky initiative in Kansas or an August congressional race in upstate New York among 125,000 voters changing the trajectory of the United States?

Again, it’s left-wing politicians who are out of step on abortion policies. Arizonans on the center or right should be disappointed that Masters is the party’s nominee.

Most polls show Americans oppose allowing abortion for any reason until birth, while nearly all Democrats, including supposed moderates, believe in zero restrictions on extinguishing nascent life.

Ultimately, the debate has now devolved mainly into a vague messaging battle, and pro-lifers will be more successful long term by highlighting the barbaric extremism of the left while not letting their media acolytes put us on defense.

In response to a conservative majority on the Supreme Court, the hapless White House and its congressional allies seem determined to promote a culture of death in any way that’s necessary.

This includes egregious pushes to eradicate the filibuster and packing the Supreme Court, activism that’s both unconstitutional and purely partisan.

Biden even attacked the Hyde Amendment — prohibiting federal abortion funding unless the mother’s life is in danger  — which enjoyed bipartisan support, including his, for decades.

Even more extreme, earlier this year, all but one Senate Democrat voted for the radical “Women’s Health Protection Act” to legally enshrine a “right” to abortion until birth, as well as ban all state restrictions.

The totalitarian measure failed, yet the Biden administration persisted, declaring they will “continue to explore the measures and tools at our disposal to protect access to women’s reproductive care.”

In the aftermath of the Supreme Court rightly removing itself from politics and returning the abortion issue to voters, pregnancy centers that provide vital care to women in unplanned pregnancies have been vandalized, and ignominious “protests” at Supreme Court justices’ private residences led to an assassination attempt the media downplayed.

In the post-Dobbs era, we don’t need whimsical candidates like Masters and others who will undoubtedly follow; we need courageous governors and intrepid state legislatures who speak for life and against the evil of abortion.