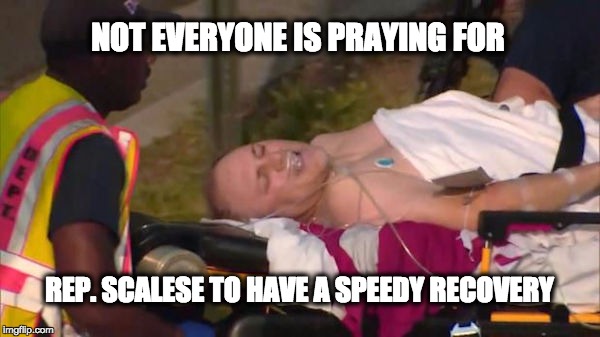 A Democratic Party leader in Nebraska finds himself out of work after being recorded saying some pretty disgusting things about the recently shot Congressman Steve Scalise (R-LA).

Nebraska Democrat Phil Montag, who was the party’s technology chairman, has been relieved of his duties by the state party chairwoman Jane Kleeb, after he was recorded during an insane rant that was filled with foul language.

“This motherf***er, like his whole job is like to get people, convince Republicans to f***ing to kick people off f***ing health care. I hate this motherf***er. I’m f***ing glad he got shot!” Montag then admitted that he would never say such things in public, before repeating, “I wish he was f***ing dead.”

You can hear the audio for yourself below – but remember it’s filled with foul language:

Kleeb told Nebraska’s Fox 42 that Montag had been fired before adding, “We obviously condemn any kind of violence, whether it’s comments on Facebook or comments in a meeting. Our country is better than the political rhetoric that is out there from both the far right and the far left.”

Montag is actually the second Nebraska Democrat leader to have found themselves in hot water for saying horrible things about the attempted assassination of a political opponent. Just last week Chelsey Gentry-Tipton was asked to resign over a Facebook post about Congressman Scalise.

The latest turn of events happened when Montag went to see and console Tipton for the fallout from her comments and an associate of Tipton’s decided to record the conversation.

Kleeb had called for Gentry-Tipton to resign as the Black Caucus chairwoman last week because of comments Gentry-Tipton had posted on Facebook. She declined to resign from the elected position, saying her post was taken out of context by party officials.

Kleeb could fire Montag because his position is an appointed one. She cannot fire Gentry-Tipton because her post is an elected one. Both are volunteer positions.

Gentry-Tipton had posted in a thread about the shooting: “Watching the congressman crying on live tv abt the trauma they experienced. Y is this so funny tho?”

Later, in the same thread, she stated, “The very people that push pro NRA legislation in efforts to pad their pockets with complete disregard for human life. Yeah, having a hard time feeling bad for them.”

Yes, Democrats are literally turning on each other and entrapping each other saying horrible things about an attempted mass assassination of GOP lawmakers. Disgusting.