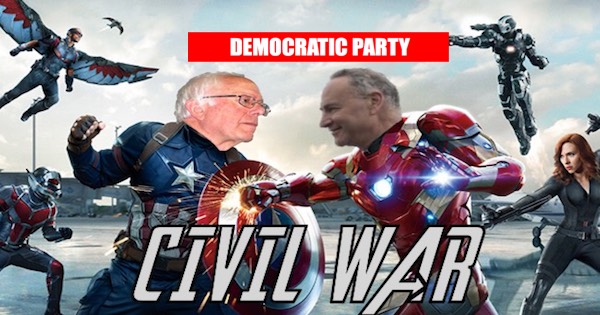 Since the Hillary Clinton defeat, the Bernie wing of the party has gained even more power with the emergence of two senators from the extremely liberal wing of the party, Elizabeth ‘Pocahontas’ Warren, and Al Franken(stein)  as the faces of the Democratic Party.

But the real battle as of now is in the Senate where in 2018, 23 Democrats will be running for reelection (vs 9 Republicans). Seven of those Democrats are running for reelection in states that went for President Trump in the 2016 election ;Joe Donnelly (IN), Claire McCaskill (MO), Heidi Heitkamp (ND), Joe Manchin (WV), Bill Nelson (FL), Jon Tester (MT), and Tammy Baldwin (WI).

According to The Hill reported this morning, Bernie Sanders is really putting pressure on the more “moderate” democratic senators and they are not happy. In fact Sanders’ recent actions have caused tensions to rise so high within the caucus that Senate Minority Leader Chuck Schumer held a meeting trying to bring peace to his caucus:

“Sen. Charles Schumer (D-N.Y.) is trying to keep the peace in the Senate Democratic Caucus, as Sen. Bernie Sanders’s (I-Vt.) aggressive effort to push the party left is giving some colleagues heartburn. The Senate minority leader convened a meeting last month between Sanders, a liberal stalwart, and a group of Democrats Sanders criticized for voting against an amendment he co-wrote to lower the cost of prescription drugs by allowing their importation from Canada.”

When his amendment failed Sanders let loose and told USA Today that the Democrats who voted against his amendment “lacked guts.”  Now the Democratic Party senators who Sanders accused of being gutless are firing back at Sanders, calling his recent actions out-of-bounds:

“‘You cannot do that if you’re in the leadership,’ said one senator who did not approve of Sanders’s tactics and requested anonymity to speak frankly.”

Even though Sanders had angered many Democratic Senators with his comments, he refused to apologize to them:

“Sanders told colleagues at the meeting that he did not intend to inflict any political damage but declined to apologize for his policy positions, according to a source familiar with the meeting.”

A Civil War is breaking out in the Democratic Party, it will be interesting to see Minority Leader Schumer will be able to keep the party together.