Democrat Bill Requires All Gun Owners to be Federally Licensed 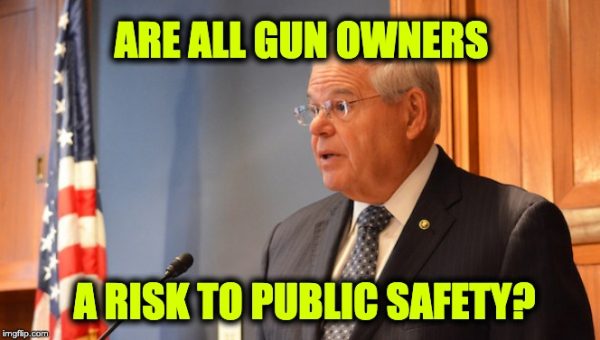 In their latest attempt to destroy the Second Amendment a new Democrat bill was introduced on Thursday. Democrat Senator Robert Menendez (D-NJ), the man who created the bill that allowed Obama to shove through the Iran deal,  has introduced a bill that requires ALL gun owners to be federally licensed before they can exercise their 2nd amendment right.  Signing on to the bill were Senator Elizabeth “Princess Spewing Bull” Warren (D-MA) and Representative Hank “Jews are Termites” Johnson (D-GA)

“Under the legislation, Americans would be required to obtain a federal or state license to buy or own a gun, federal background checks would be required for all gun purchases, military-style assault weapons would be banned, and minimum age to buy a weapon or ammunition would be set at 21.”

That’s not counting the part of the law that adds high taxes to ammunition and weapons.

First of all, federal background checks are ALREADY required for all gun purchases. Many of the mass shooters actually passed their background checks, while others were never supposed to have guns in the first place according to the law. Licensing would do no good whatsoever…except to create an infringement on the 2A.

That’s because it is the agenda to disarm ordinary citizens, and has nothing whatever to do with saving lives. Anti-gunners tend to run on straight emotional arguments – common sense has nothing to do with it.

The proposal also contains a “”may issue”” wording that could easily be abused, according to Bearing Arms.

The feds will be able to turn down licenses for anyone who they perceive:

“‘(i) reliable, articulable, and credible information that the individual has exhibited or engaged in behavior to suggest the individual could potentially create a risk to public safety; or

“(ii) other existing factors that suggest that the individual could potentially create a risk to public safety.”

If you believe the liberal anti-Gun freaks anyone owning a firearm is a risk to public safety.

Let’s take a different view and check the facts:

“Nearly 1.25 million people die in road crashes each year, on average 3,287 deaths a day. An additional 20-50 million are injured or disabled. More than half of all road traffic deaths occur among young adults ages 15-44.” (ASIRT)

It sounds to me like we should ban cars.  Drivers are supposed to be licensed, too…has it saved lives? No.

The fight for your rights

The bill has little to no chance of passage in the Senate, but please pay attention: it’s a harbinger of what could happen if the Democrats retake the Senate this year.

Remember: Anti-gunner billionaire Michael Bloomberg is busily using his money to get Democrats elected in individual states. Well, that and selling Ice Cream.

Buying elections with lavish spending is a problem we should all pay close attention to. Nanny tyrant Bloomberg wants gun control, and he wants it now. Judging from the Virginia debacle from his money being used to switch a gun-friendly state to a complete disaster for gun owners, we as Americans cannot afford to be lazy in this fight. Make no mistake, this is a fight.

Watch what is happening in your state. Vote against any candidate that has taken Bloomberg money or voted for these kinds of bills. Fight for your rights, or they will disappear…never to return.