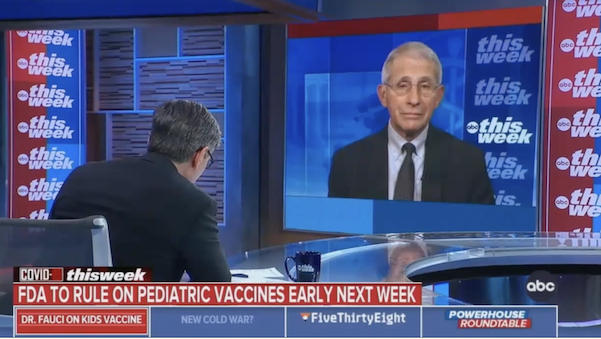 Appearing on ABC’s “This Week,” Fauci doubled down that he didn’t lie to Congress about NIH funding gain-of-function research at the Wuhan Institute of Virology.

Never forget that George Stephanopoulos is not a journalist. He is a Democrat operative. Not just any Democratic operative, either — he was Bill Clinton’s Communications Director amidst the “bimbo eruptions” phase of his presidency. Now Stephanopoulos is the face of “serious journalism” on ABC. This is what’s wrong in legacy media today.

For the last few days, there have been headlines blasting Fauci and the National Institute of Health (NIH) due to the letter from the NIH admitting to Rep. James Comer (R-KY) that grant funding to Peter Daszak’s EcoHealth Alliance in connection with the lab in Wuhan was gain-of-function research. The letter states that EcoHealth Alliance violated the terms of the grant by significantly increasing the viral load of the viruses that they were testing.

Fauci has repeatedly stated that the NIH hasn’t funded gain-of-function research at the lab in Wuhan. Still, the letter admits that it did due to EcoHealth Alliance’s failure to disclose that they had been supercharging bat coronaviruses.

After nearly two years of the public demanding answers from the “medical experts” about the origin of SARS-CoV-2 and the same “experts” circling the wagons around the research conducted in Wuhan, it’s significant that the NIH admitted that risky experiments with coronaviruses were being undertaken and with U.S. grant money to boot.

Even Vanity Fair, not exactly known for any sort of right-wing bias, noted how significant the letter was, “…the NIH letter—coming after months of congressional demands for more information—seemed to underscore that America’s premier science institute has been less than forthcoming about risky research it has funded and failed to properly monitor.”

But Democrat hack-turned-journo, George Stephanopoulos allowed Fauci to prevaricate about what the NIH letter said.

Fauci quadruples down and says that he didn’t lie to Congress and that the NIH didn’t fund “gain-of-function of concern” — which is an interesting shifting of the goalposts.

STEPHANOPOULOS: The controversy over whether the U.S. was funding risky COVID research in Wuhan was kicked up again this week when the NIH released a letter about that research, which showed that the subcontractor had not disclosed some results in a timely manner.

Now, some critics and analysts have seized on that to say you and others have misled the public about U.S. funding of this so-called gain-of-function research. The NIH says that’s false. Our medical unit backs that up.

But Senator Rand Paul stepped up that criticism in a new interview with Axios on HBO. Let’s play it.

UNIDENTIFIED REPORTER: By the president?

PAUL: Yes, absolutely. The thing is, is just for lack of judgment if nothing else. He’s probably never going to admit that he lied. He’s going to continue to dissemble and try to work around the truth and massage the truth.

[Cuts back to live]

STEPHANOPOULOS: I want to give you the opportunity to respond to Senator Paul, but also explain, what was the United States funding? What wasn’t it funding? And why that’s important?

DR. ANTHONY FAUCI: Well, I obviously totally disagree with Senator Paul. He’s absolutely incorrect. Neither I nor Dr. Francis Collins, the director of the NIH lied or misled about what we’ve done.

The framework under which we have guidance about the conduct of research that we fund, the funding at the Wuhan Institute was to be able to determine what is out there in the environment, in bat viruses in China. And the research was very strictly under what we call a framework of oversight of the type of research.

And under those conditions which we have explained very, very clearly, does not constitute research of gain-of-function of concern. There are people who interpret it that way, but when you look at the framework under which the guidance is, that is not the case.

So I have to respectfully disagree with Senator Paul. He is not correct that we lied or misled the Congress. It’s just not correct, George. I’m sorry.

STEPHANOPOULOS: That — right. It showed that what was being researched was very far from the COVID — the SARS-COVID virus. But it did show that the subcontractor did not release some results in a timely manner.

What did learn from the letter? Does it show that some of the research we were finding was riskier than we know?

FAUCI: No, it isn’t. We knew what the risk was, and what the oversight is. Certainly, they should have put their progress report in a timely manner. No denial of that, and there will be administrative consequences of that.

But one of the things that get mixed up in this, George, and it really needs to be made clear to the American public. There’s all of this concern about what’s gain-of-function or what’s not, with the implication that that research led to SARS-CoV-2, and COVID-19. Which, George, unequivocally anything that knows anything about viral biology and phylogeny of viruses know that it is molecularly impossible for those viruses that were worked on to turn into SARS-CoV-2, because they were distant enough molecularly that no matter what you did to them, they could never, ever become SARS-CoV-2.

And yet when people talk about gain-of-function, they make that implication which I think is unconscionable to do, to say, well, maybe that research led to SARS-CoV-2.

You can ask any person of good faith who’s a virologist, and they will tell you, absolutely clearly, that that would be molecularly impossible.

So, things are getting conflated, George, that should not be conflated.

STEPHANOPOULOS: Dr. Fauci, thanks as always for your time and information.

Going back to that Vanity Fair article referenced above… it noted that internet sleuths DRASTIC found that in 2018, EcoHealth Alliance had sought funding from DARPA to “evaluate growth potential” of inserting bat coronavirus similar to SARS into “human-specific cleavage sites,” which sounds familiar…

And we know that the Chi-Coms were looking to weaponize coronaviruses. They admitted it in a 2015 documentary.

As scientists remain in a stalemate over the pandemic’s origins, another disclosure last month made clear that EcoHealth Alliance, in partnership with the Wuhan Institute of Virology, was aiming to do the kind of research that could accidentally have led to the pandemic. On September 20, a group of internet sleuths calling themselves DRASTIC (short for Decentralized Radical Autonomous Search Team Investigating COVID-19) released a leaked $14 million grant proposal that EcoHealth Alliance had submitted in 2018 to the Defense Advanced Research Projects Agency (DARPA).

It proposed partnering with the Wuhan Institute of Virology and constructing SARS-related bat coronaviruses into which they would insert “human-specific cleavage sites” as a way to “evaluate growth potential” of the pathogens. Perhaps not surprisingly, DARPA rejected the proposal, assessing that it failed to fully address the risks of gain-of-function research.

The leaked grant proposal struck a number of scientists and researchers as significant for one reason. One distinctive segment of SARS-CoV-2’s genetic code is a furin cleavage site that makes the virus more infectious by allowing it to efficiently enter human cells. That is just the feature that EcoHealth Alliance and the Wuhan Institute of Virology had proposed to engineer in the 2018 grant proposal. “If I applied for funding to paint Central Park purple and was denied, but then a year later we woke up to find Central Park painted purple, I’d be a prime suspect,” said Jamie Metzl, a former executive vice president of the Asia Society, who sits on the World Health Organization’s advisory committee on human genome editing and has been calling for a transparent investigation into COVID-19’s origins.
Source: Vanity Fair

This is the issue. It looks damned suspicious. We know that the Chinese government has taken over the Wuhan lab, repeatedly lied, deleted information, destroyed samples, and killed whistleblowers. The CCP has also thwarted international investigations into the origin of COVID-19.

The WHO can’t be trusted, either. The head of the WHO, Dr. Tedros Adhanom, got his job thanks to China. Additionally, one of the WHO “investigators” into the origin of the pandemic was none other than Peter Daszak of EcoHealth Alliance.

The fact is, we just don’t know if they did have a previously unknown bat coronavirus that was closer to SARS-CoV-2 than the RaTG13 virus that is 96%-97% similar molecularly. Do you think that the Chi-Coms are going to volunteer that information? Don’t hold your breath.

Meanwhile, the “useful idiots” like Fauci, who have a stake in the gain-of-function research game — either financially, for “the Science,” or just the prestige of it — will continue to defend it as not “real” gain-of-function research because they think the risk is worth the reward. They don’t seem to realize that they’re dealing with scientists connected to the Chinese Communist Party and their motives aren’t pure.