Democrats Are Starting To Defect From Pelosi Impeachment Charade 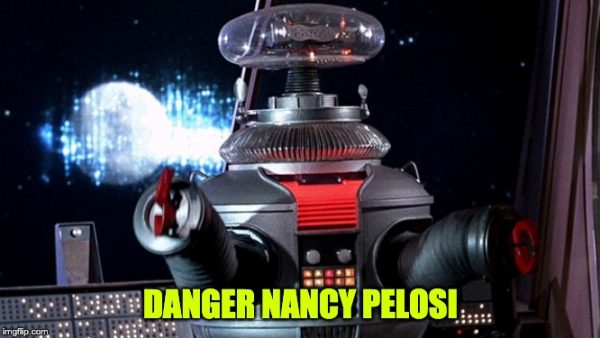 The Democrats’ impeachment charade is now leading to defections from “master legislator” and “astute leader” Nancy Pelosi’s caucus. The general consensus seems to be that it’s time for Pelosi to stop sitting on the bogus articles of impeachment and send them over to the Senate, or drop the whole thing altogether.  Defect from Pelosi

The Washington Post’s Seung Min Kim reports Pelosi “doesn’t have a lot of leverage here and I think the fact that she’s losing members of her own party in the Senate … these Senators come from the most liberal flank of the caucus to the most moderate who are all saying, ‘Let’s get this thing going. We have a job to do. Let’s get this trial moving and get it over with.’”

CNN panel: Pelosi is “losing members of her own party” as she delays sending impeachment articles to the Senatehttps://t.co/eVBhMA6hxD pic.twitter.com/FqWfO4xYXu

NBC News reports, “A growing number of Democratic senators are saying it’s time for House Speaker Nancy Pelosi, D-Calif., to submit the articles of impeachment against President Donald Trump to the Senate.”

Sen. Dianne Feinstein (D-Calif.) points out the Democrats’ conundrum: “The longer it goes on the less urgent it becomes. So if it’s serious and urgent, send them over. If it isn’t, don’t send it over.” Senate Majority Leader Mitch McConnell meanwhile reminds interested parties that Pelosi’s leverage over Senate trial is “nonexistent,” adding:

There will be no haggling with the House over Senate procedure. We will not cede our authority to try this impeachment. The House Democrats’ turn is over. The Senate has made its decision. The 1999 precedent does not guarantee witnesses or foreclose witnesses. Let me say that again: It neither guarantees witnesses nor forecloses witnesses. It leaves those determinations until later in the trial, where they belong.

Sen. McConnell: Pelosi’s leverage over the Senate trial “nonexistent,” “will be no haggling with the House”https://t.co/hhWU2PaPDb pic.twitter.com/QHM572srhM

But then there is the case of Rep. Adam Smith (D-WA) chairman of the House Armed Services Committee:

Smith appeared on CNN Thursday morning, mostly to discuss the situation in Iraq. But anchor John Berman also asked about Pelosi’s decision not to send the House-passed articles of impeachment to the Senate for trial. “Is it time, chairman?” Berman said.

“I think it is,” Smith answered. “I mean, I understand what the speaker is trying to do, basically trying to use the leverage of that to work with Democratic and Republican senators to try to get a reasonable trial … but at the end of the day, just like we control it in the House, [Majority Leader] Mitch McConnell controls it in the Senate.”

Smith wasn’t finished. “I think it was perfectly advisable for the speaker to try to leverage that to get a better deal,” he continued. “At this point, it doesn’t look like that is going to happen, and yes, I think it is time to send the impeachment to the Senate and let Mitch McConnell be responsible for the fairness of the trial.”

JUST NOW: (wow) "I think it is time to send the impeachment to the Senate and let Mitch McConnell be responsible for the fairness of the trial. "

That is Dem Armed Services chair @repadamsmith on @NewDay. First chair to move to that position?pic.twitter.com/pxlQWEdN41

Less than three hours later, Smith hit twitter to walk away from what he said on CNN:

I misspoke this morning, I do believe we should do everything we can to force the Senate to have a fair trial. If the Speaker believes that holding on to the articles for a longer time will help force a fair trial in the Senate, then I wholeheartedly support that decision.

He didn’t include a picture with the tweet just his standard avatar. Most probably Pelosi took him to the woodshed and he  won’t be able to sit for at least a week week

But Smith isn’t Pelosi’s biggest mess she had to clean up today. Time Magazine is reporting that Pelosi is holding up the articles of impeachment because she heard convicted Watergate criminal suggest it on TV.

On Dec. 17, the night before the full House would debate and vote on Trump’s impeachment, Pelosi met behind closed doors with top caucus members on the Democratic Steering and Policy Committee. She hinted, for the first time, that she was contemplating a curveball: declining to immediately transmit the impeachment articles to the Senate after the House passed them. “The rule empowers the Speaker to be able to decide how to send the articles and when to send the articles over to the Senate,” she said, according to an aide who was in the room. “My view is we don’t know enough about what they are going to do. We want to see what [is] their level of fairness and openness and the rest.”

Pelosi, according to an aide, had been mulling the tactic since she heard former Nixon White House counsel John Dean float the idea on CNN on Dec. 5. In the committee meeting, she added that she believed McConnell would be motivated to move. “Somebody said to me today that he may not even take up what we send. [But] then [Trump] will never be vindicated,” she said, according to the aide in the room. “He will be impeached forever. Forever. No matter what the Senate does.”

America would be much better off if she watched “Lost in Space,” got into a rocket ship and blasted off into space with a robot named robot.