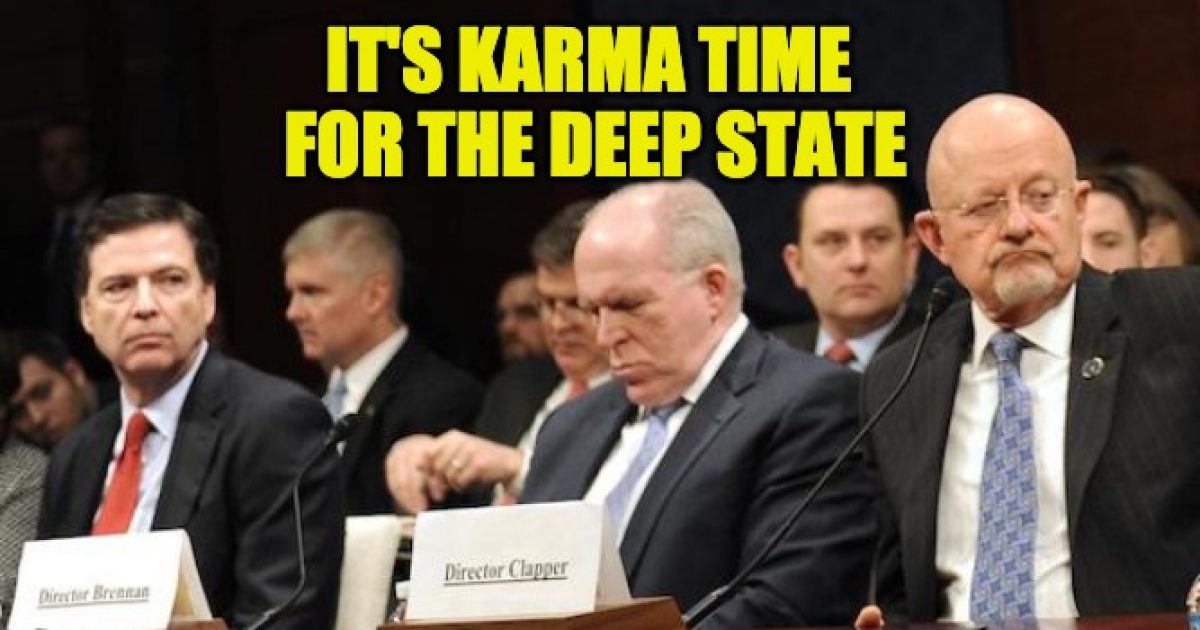 It’s karma time for the deep state. It was a move rumored for weeks, but Nancy Pelosi’s attacks over the past few days probably contributed to the President finally pulling the trigger and ordering the documents from the beginning of the Russia probe declassified.  If the information in those documents are as earth-shattering as anticipated, Democratic Party heads will roll and the President’s re-election efforts will get a major boost.

Tonight President Trump signed an executive order allowing Attorney General Barr declassify the documents related to the origins of the Russia witch hunt. The order also directed leaders of the U.S. intelligence community and other departments and agencies to cooperate with Barr during his review.

The First notice came from the press office:

Today, at the request and recommendation of the Attorney General of the United States, President Donald J. Trump directed the intelligence community to quickly and fully cooperate with the Attorney General’s investigation into surveillance activities during the 2016 Presidential election. The Attorney General has also been delegated full and complete authority to declassify information pertaining to this investigation, in accordance with the long-established standards for handling classified information. Today’s action will help ensure that all Americans learn the truth about the events that occurred, and the actions that were taken, during the last Presidential election and will restore confidence in our public institutions.

Earlier this week Rep. Mark Meadows (R-NC) said on Fox & Friends, that he believes the declassification of key documents tied to the Russia probe is “right around the corner” and says he agrees with former committee chair Trey Gowdy that the FBI withheld potential “game-changing” evidence. Adding that “Gowdy has seen documents that actually I have not seen. But we have come to the same conclusion and that is, indeed, (former Trump campaign associate) George Papadopoulos was actually taped and recorded” and that there are transcripts of the interviews that could shed light on the Russia probe and its origins.

Meadows also said “the American people will be astonished to see not only was it going on and the president was right, he was actually taped and recorded but other than that, he was not colluding with the Russians and they knew this very early on. So that could be the game changer that (Gowdy) was referring to.”

Well, it looks as though we’re going to find out.  Congressional Republicans have been calling on Trump to declassify the documents for over a year.  And now they and America will get their wishes.

The declassified documents will probably include the so-called “Bucket Five” – documents which were originally presented to the Gang of Eight (top two leaders on each party in both houses). The Bucket Five included everything the FBI and DOJ used against Trump campaign aide Carter Page – including the FISA surveillance application and its underlying exculpatory intelligence documents which the FISA court may have never seen. Also included may be the Bruce Ohr/Nellie Ohr communications about the dossier, the transcripts of the surveillance of Papadopoulos and Carter Page, the warnings that the dossier was bogus presented to the FBI before it was used as part of the FISA application and much more.

And per Sara Carter it might include information that Judicial Watch has been trying to get its hands on for a long time:

Former supervisory special agent Jeffrey Danik has been fighting for over two years, Sean, with Judicial Watch to get the text messages of former and fired Deputy Director Andrew McCabe. Apparently, it is a treasure trove. It’s not only going to answer questions regarding his wife and those issues. But apparently, there’s a lot more information contained in these text messages and emails that the FBI does not want release.

Folks I am sure there are going to be other surprises. So go buy the big popcorn, and fasten your seatbelts, because America is about to learn some truth and the deep state is about to have a very bumpy flight.’

Below is the memo the President sent to various departments alerting them to the declassification and directing them to cooperate:

MEMORANDUM FOR THE SECRETARY OF STATE
THE SECRETARY OF THE TREASURY
THE SECRETARY OF DEFENSE
THE ATTORNEY GENERAL
THE SECRETARY OF ENERGY
THE SECRETARY OF HOMELAND SECURITY
THE DIRECTOR OF NATIONAL INTELLIGENCE
THE DIRECTOR OF THE CENTRAL INTELLIGENCE AGENCYSUBJECT:    Agency Cooperation with Attorney General’s Review of Intelligence Activities Relating to the 2016 Presidential CampaignsBy the authority vested in me as President by the Constitution and the laws of the United States of America, I hereby direct the following:Section 1.  Agency Cooperation.   The Attorney General is currently conducting a review of intelligence activities relating to the campaigns in the 2016 Presidential election and certain related matters.  The heads of elements of the intelligence community, as defined in 50 U.S.C. 3003(4), and the heads of each department or agency that includes an element of the intelligence community shall promptly provide such assistance and information as the Attorney General may request in connection with that review.Sec. 2.  Declassification and Downgrading.   With respect to any matter classified under Executive Order 13526 of December 29, 2009 (Classified National Security Information), the Attorney General may, by applying the standard set forth in either section 3.1(a) or section 3.1(d) of Executive Order 13526, declassify, downgrade, or direct the declassification or downgrading of information or intelligence that relates to the Attorney General’s review referred to in section 1 of this memorandum.  Before exercising this authority, the Attorney General should, to the extent he deems it practicable, consult with the head of the originating intelligence community element or department.  This authority is not delegable and applies notwithstanding any other authorization or limitation set forth in Executive Order 13526.Sec. 3.  General Provisions.   (a)  Nothing in this memorandum shall be construed to impair or otherwise affect:

(i)   the authority granted by law to an executive department or agency, or the head thereof; or

(ii)  the functions of the Director of the Office of Management and Budget relating to budgetary, administrative, or legislative proposals.

(b)  This memorandum shall be implemented consistent with applicable law and subject to the availability of appropriations.

(c)  The authority in this memorandum shall terminate upon a vacancy in the office of the Attorney General unless expressly extended by the President.

(d)  This memorandum is not intended to, and does not, create any right or benefit, substantive or procedural, enforceable at law or in equity by any party against the United States, its departments, agencies, or entities, its officers, employees, or agents, or any other person.

(e)  The Attorney General is authorized and directed to publish this memorandum in the Federal Register.