How Much Debt Is Too Much? When Will The Debt Bomb Explode? 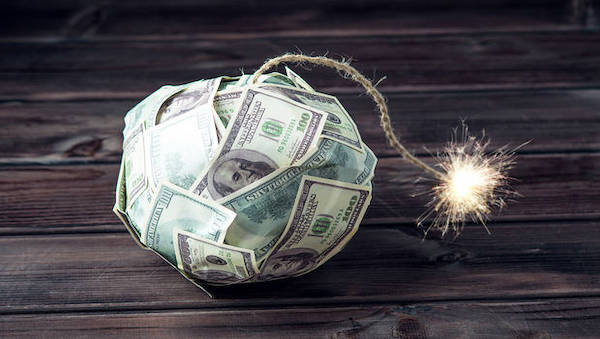 Since the beginning of 2020, the national debt has grown a gargantuan $4.26 trillion to $27.5 trillion amid the Covid lockdowns and a tremendous $2.2 trillion spike and counting in annual federal spending to deal with responding to the pandemic and its devastating economic fallout, including 25 million jobs lost at the height of the recession in April. Debt Bomb

Thankfully, more than 16 million jobs have been recovered since, but that’s still a whopping 25 percent increase in the debt. For perspective, since 1980, the national debt had averaged 8.74 percent growth a year while the economy has only managed 5.4 percent nominal growth, that is, before adjusting for inflation. If those trends had continued without any fiscal adjustments by Congress, it might have taken until 2041 for the national debt to reach $100 trillion, or about 192 percent of debt to GDP, which would only be about $56.5 trillion by that time.

Of the $4.26 trillion increase in the debt this year, much of that was the $2.2 trillion CARES Act, including $525 billion for small businesses, $500 billion for critical industries, cities, and states, $500 billion of additional checks to households that will come atop paychecks or unemployment benefits, $130 billion for hospitals to fight the outbreak, an additional $150 billion for state and local governments akin to the Obama stimulus of a decade ago, an additional $50 billion employee retention tax credit for companies, and the rest was a massive expansion of unemployment benefits that amounted to paid sick leave for every person who lost their jobs when the virus struck.

Now, Congress has another roughly $900 billion bill for phase four economic relief legislation that will renew the small business Paycheck Protection Program, funds to save airlines and other critical transportation industries, include $600 dollar checks for working families, another $600 child tax credit, an extension of unemployment benefits plus a $300 add-on to those benefits and vaccine distribution funds.

That would come atop another $1.4 trillion omnibus spending bill, as the 2020 spendathon continues.

It raises the question, with the national debt at $27.5 trillion—or a whopping 129 percent of the $21.1 trillion Gross Domestic Product—how much debt is too much debt?

The factors of a sovereign debt crisis are essentially two-fold: 1) Large debt, and 2) public demand collapses for government treasuries that refinance existing debt. The first is easy to chart, and the second can be tracked by looking at interest rates, such as the 10-year treasuries. If rates are falling, that means demand for treasuries is high.

This stage of the analysis shows that, well, the debt is growing substantially, and interest rates collapsed to record lows in the pandemic recession — even today 10-year treasuries are a super-low 0.9 percent — so no crisis, right?

The reason we don’t have a crisis right now is a combination of the Federal Reserve via quantitative easing — and other financial institutions and central banks globally, that buy treasuries.

In this case, the Fed has purchased roughly $2.2 trillion of additional treasuries since February to a total of $4.6 trillion, meaning, in this current recession, the new debt was financed almost entirely by the Federal Reserve on the front-end in a bid to keep interest rates low.

When the global economy goes into recession, demand surges for U.S. treasuries via financial markets but also via artificial means like the central banks tend to surge. So long as that continues, conventional wisdom holds, the debt cycle will continue into perpetuity.

An additional factor to consider is the relative strength of the dollar, which also serves as a proxy for interest rates. Generally, when rates are rising, demand for treasuries is dropping and the dollar is usually weakening, and vice versa.

So, when the crash happened in March, predictably, the debt skyrocketed, demand for treasuries surged, and the dollar got stronger than ever. Then, all the new treasuries were bought, the supply of new debt dropped substantially, and rates began steadily rising, and the dollar steadily weakening as the economy rebounded dramatically in the third quarter.

In the short term, the dramatic measures have largely been justified by the fact that the government was compelling businesses to stay closed, and thus economic relief was just compensation for what was essentially a taking by the government.

Long term, however, the question of sustainability pursuant to the national debt remains a key concern—one that is difficult to track.

One question is whether the economy can keep up with the growth of the debt. If it did, then things might seem okay, normal inflation would make even a $100 trillion debt seem small because the economy was growing robustly. But if the economy continues with its slow growth seen for the past two decades—it has not grown above 4 percent since 2000, and not above 3 percent since 2005—then we’re on a Japan-like trajectory with a top-heavy stagnant economy with declining labor participation.

The other side of the coin is Europe which had a bout of sovereign debt crises. The answer is the Euro currency and the unwillingness of Germany to print money to finance the debts of Italy and Spain and Greece to a lesser extent. The countries that retained their sovereignty were the ones with their own currencies and the printing press, like the UK.

The two unappealing choices, currently, unfortunately, are debt finance include the Fed’s printing press, or turning sovereignty over to international financial institutions by begging banks to buy treasuries.

Adam Smith wrote about this in “The Wealth of Nations,” largely from the perspective of creditors, who he said were losing their investments when the printing press was fired up to pay the debt. Since 1776, however, international banks have found a way to perpetuate this cycle and to maintain profitability, even with super-low interest rates. To break that cycle, you’d have to break the wheel, but most assuredly it would be rebuilt in some fashion in almost the same manner.

The alternative to the Japanese model is the European model of austerity: you pay down the debt or initiate spending freezes, which is the alternative to printing the money. Balancing the budget is almost out of the question, with some combination of raising taxes and cutting the budget so substantially that most of the entitlement services particularly the elderly depend on would be dismantled. There is no market for Social Security, Supplemental Security Income, or Medicaid.

The numbers aren’t great. Almost 70 percent of the budget operates on autopilot: Social Security, Medicare, Medicaid, etc. and are not subject to annual appropriations. To even make any changes to these programs, you need 60 votes in the Senate—which Republicans have never had in the history of the filibuster for more than a century— leaving taxpayers essentially strapped into a one-way roller coaster for which there is no escape.

The reality is that no threatening to not pass the debt ceiling or partial government shutdowns will achieve much more than token concessions. The barriers to resolving the debt are mostly political, and the reasons to not do too much to change the trajectory are almost as numerous as the treasuries bills coming due every week.

But the day of reckoning is coming. The debt bomb will go off. The question is if it’s 10 years from now, 20 years, or 100 years, in which case who cares? The trick is to never find out because Congress kept things in check.

Unfortunately, and this part’s important so pay attention, with states locking down and the vaccine distribution underway, the race for Covid herd immunity is underway. In the meantime, the job losses will be gargantuan. If we get to March and there are another 20 million people out of work, we will be right back in a recession bordering on depression. The pressures on Congress for further urgent action will be tremendous.

At that point, the printing press will be the only game in town. And don’t be surprised if the debt increases by another 20 to 25 percent in 2021, too. The thing to monitor will be economic recovery. Once the economy reopens, Congress has to tap on the brakes. The debt bomb is just getting warmed up.