Rules Aren't For Him 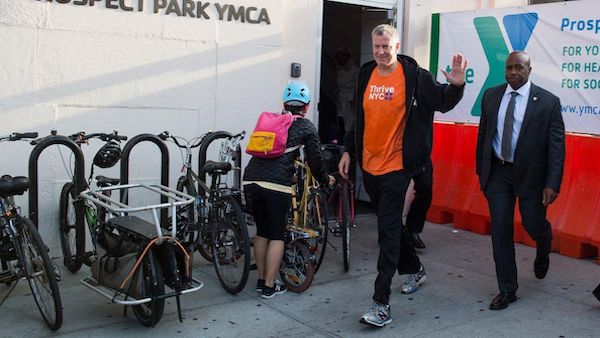 He can break the rules simply because he’s in charge, and he’s better than you. At least he believes he is. de Blasio visits Gym

It’s really no different than any other communist dictator, right?

On Monday morning, New York City Mayor Bill de Blasio was spotted heading to the YMCA in Brooklyn to work out. At 8 pm on Monday evening, all fitness facilities, restaurants, and bars in the state were to be closed to prevent the spread of Coronavirus.

New Yorkers that spotted the Mayor took it precisely the way that you’d imagine New Yorkers to take it.

Among comments from New Yorkers walking by who saw his security detail. “Is the mayor really working out.” “He shouldn’t be here.” “What an idiot.”

His spokesperson, Melissa Russo, issued a statement that said,

“The YMCA has been a huge part of his and his family’s life, like it has been for a lot of New Yorkers. It’s clear that’s about to change and before that, the mayor wanted to visit a place that keeps him grounded one last time. That doesn’t change the fact that he is working around the clock to ensure the safety of New Yorkers. After today, gyms will close and he will no longer be visiting the YMCA for the foreseeable future.”

The Mayor was called out on Twitter by his former aide, Rebecca Katz.

No current or former staff member should be asked to defend this.

The Mayor’s actions today are inexcusable and reckless. https://t.co/tjz3AQHpzu

But the highly disliked Mayor of New York fired back at the criticism by his former advisors.

“I respect them both; they can say what they want, but I think this is just a perverse reaction, honestly,” the mayor said.

“I have been making extremely serious difficult decisions nonstop and then talking to the people in a very forthright manor about them,” Hizzoner touted.

“There’s something wrong in the world where this kind of very small matter gets blown up like that by people, you know, who live in a world of public relations.

“I don’t live in that world. I live in the regular world.”

He also said that he “got no exercise whatsoever over the weekend” and that he needs to exercise “to be able to stay healthy and make decisions.”

Mayor Bill de Blasio defends going to the gym: "This would be the last chance to get some exercise. I got no exercise whatsoever over the weekend. I was in this building a huge percentage of the time. I need exercise to be able to stay healthy and make decisions." pic.twitter.com/abwvcmOe5d

See that? It’s imperative that he keeps himself healthy because he is a Very Important Person — certainly way more important than you are. He can afford to bend the rules of “social distancing” and go and work out at a public gym just hours before it closes because he’s just so extraordinary. Criticizing him for it is clearly just being petty.

Clearly, the Mayor needs to work out more as his decision-making ability seems impaired. The optics of this are just awful.

As usual, de Blasio just doesn’t get it.

.@NYCMayor on outrage over his going to the gym during the coronavirus: “I don’t get it” pic.twitter.com/gNk8HngAuC

Might I humbly suggest that Mayor de Blasio consider getting himself a Peleton as well as some good advisors?