NY, NY, The City With A Mayor So Stupid They Had To Name It Twice 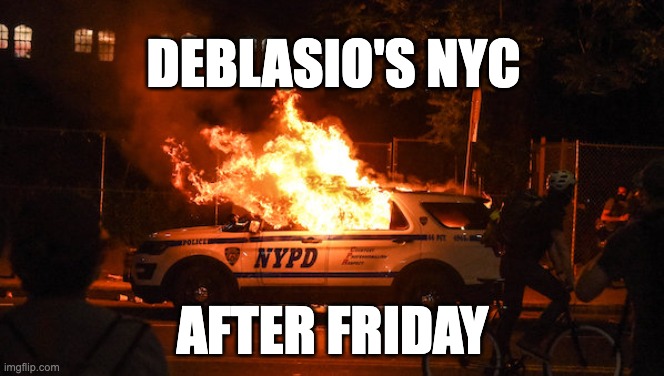 DeBlasio’s vaccine mandate is effective on Friday evening (10/29), only two days from now.  As of Tuesday (10/26), twenty-seven percent of all cops have chosen not to get the poke. DeBlasio vax mandate

The Fire Department is in even worse shape. “Andrew Ansbro, FDNY Firefighters Association president, told the ”Brian Kilmeade Show” that ”right now, 45% of New York firefighters are unvaccinated.” Ansbro thinks that Mayor Bill de Blasio’s COVID-19 vaccine mandate for state workers will lead to ”30% to 40% of firehouses” being closed down.

Ansbro warned that come Friday, city officials ”are going to be faced with the stark reality that they’re going to have to close firehouses down. And there is no other way to do it. … The manpower, the staffing just is not there. And the response times are going to go through the roof.

DeBlasio announced the mandate would no longer have a testing option last week, nine days before the deadline. Anyone who does not get at least one poke before this coming Friday will be placed on leave without pay. That includes the police officers and firefighters he praised months ago for being on the front line in fighting COVID.

Two days before the deadline, at a Wednesday morning press conference, he indicated that he believes there will be a rush to get vaxxed.

We’re seeing movement, but I think it’s too early to tell, honestly, because the numbers we have now are only through yesterday. What I expect is a surge of activity, particularly on Friday.

And let’s not forget that NYC has been facing a different kind of surge in violent crime. That surge was caused by DeBlasio cutting the NYPD budget, disbanding the NYPD anti-crime unit whose job was taking illegal guns off the street, and the bail reform law that puts criminals back on the street. He even bragged about that last one.

.@NYGovCuomo Please listen to @NYCMayor’s words. He is either completely delusional or believes that New Yorkers are idiots. He needs to be recalled, or whatever it takes to remove him from power and stop his intentional destruction of New York City. https://t.co/Yy5iescnj2

Folks, if you have plans in NYC this coming Halloween weekend, I would recommend canceling.  There is an excellent chance that the crime surge DeBlasio caused with his imbecilic policies will get worse as NY’s Mayor/moron sends cops and firefighters home without pay because he’s not really a mayor. He’s a schoolyard bully.