Dumb-Dumb De Blasio Makes NYC First In The U.S. To Require Proof Of Vaccination For Dining

The Order's Only Result Will Be To Stunt NYC's Recovery 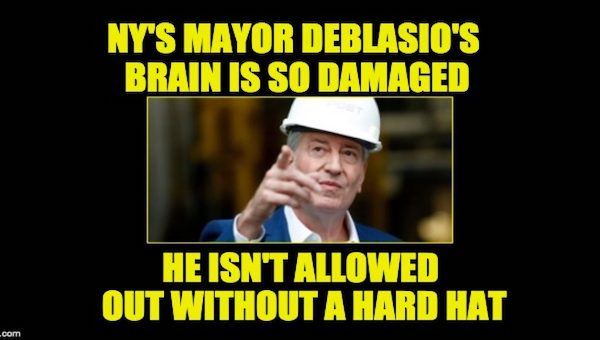 Mayor Bill De Blasio made a big announcement on Tuesday that could be the launch of vaccine mandates in other jurisdictions all over the country. But if one mayor was going to be first, why not the Socialist De Blasio. De Blasio vaccine mandate

The Democrat mayor of America’s largest city announced that beginning on August 16, customers will need to provide proof of vaccination to go to restaurants, go to public entertainment, and work out at gyms.

The vaccine requirement will also extend to employees of those venues. Enforcement will not begin until mid-September.

Jeff Note: One result of that announcement was that my wife spent much of her day looking for my son’s vaccine card. He just moved into the city, and being a single man in his 20s, he is very dependent on eateries for nourishment (he had it all the time).

The move is to force more people in NYC to “get the jab.”

Customers and workers will have to show proof that they’ve had at least one dose of a vaccine under plans to pressure New Yorkers to get a shot.

The policy will go into effect on August 16, but inspections and enforcement won’t begin until September 13, the week that the city’s public schools reopen for the fall.

The announcement came just 24 hours after de Blasio broke from Governor Andrew Cuomo and said he would not bring back an indoor mask mandate in the city.

De Blasio said Tuesday: ‘If you want to participate in our society fully, you’ve got to get vaccinated. It’s time.’

He added: ‘This is a miraculous place full of wonders, and if you’re vaccinated, all of that is gonna open up to you.’

Democrat politicians and their hacks in the Corporate Media constantly complain that the “problem” with vaccine hesitancy is solely the domain of “white Trump supporters.”

According to New York state’s data, it doesn’t look like the problem is “white Trump supporters” in the Five Boroughs refusing to be vaccinated.

Oh, would you look at that… the highest percentage of vaccine compliance appears to be… white people. Huh.

Considering the history of things like the Tuskegee Experiment, it makes sense that there is some hesitancy within the Black community regarding a not-fully FDA-approved vaccine for the virus that more than 99% of people who get it recover from.

Considering the history of De Blasio being an imbecile, it’s no wonder that he doesn’t understand the numbers on the chart or any chart with more than one number.

There is also the issue of “natural immunity” achieved after contracting the disease. According to NYC’s data, there have been over 805,000 confirmed cases of COVID-19 and nearly 175,000 “likely” cases of the coronavirus since March 2020. 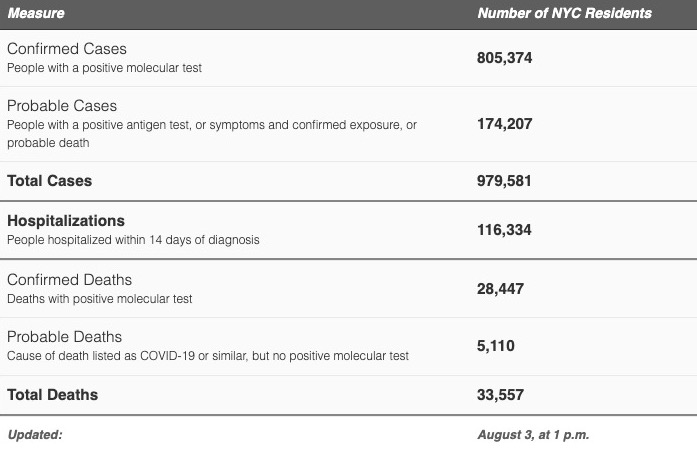 While the “medical experts” have said that even those who were confirmed to have contracted the coronavirus and recovered, the National Institute of Health (NIH) website published a report in January 2021 stating that there was “lasting natural immunity” after recovering from SARS-CoV-2.

So, which science are we supposed to believe? The experts telling people to get the vaccine or the study that shows that natural immunity lasts and you don’t need one for a while?

Don’t expect the media to ask “the experts” that question in that particular way. Because they won’t as proper questions, it looks like there’s going to be a two-tier society in NYC — one for the vaccinated and one for the unvaccinated.

Look, My wife, kids, and I have all got our two pokes. Yes, it was mostly for health reasons, and it worked. According to the CDC’s last report of vaccinated Americans who caught COVID (through April  30), only one-hundredth of one percent of vaccinated Americans caught the bug.  But along with the health reasons, the vaccine is worth it because, after a year of national quarantine, the shots will allow us to return to a more normal life (despite the mask mandates, which I will not follow).

If someone who has not had the vaccine catches COVID and gives it to someone else, the recipient of that virus is most likely another person who skipped the vaccine. Therefore the people who decided against getting the vaccine made their own decision—and if they catch COVID, that too is their decision.

The restaurant business is a big part of the NYC economy. It was just starting to come back after a year plus of lockdown. Some historic NYC eateries have shut down for good.De Blasio’s unnecessary order will serve to stunt NYC’s recovery.