De Blasio Implies Rioting Is Okay, Going To Religious Services Is Not 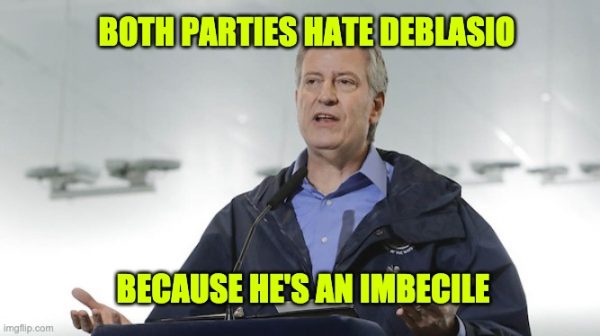 New York City Mayor Bill de Blasio said rioters congregating in mobs are not the same as people seeking to attend church. His statement seems to be made as a justification of why the NYC Democrat has threatened religious groups during the crisis but has not been nearly as tough on people destroying his city. De Blasio idiot

“When you see a nation, an entire nation, simultaneously grappling with an extraordinary crisis seeded in 400 years of American racism,” de Blasio said at a press conference. He left out that at least in NYC part of the problem can be attributed to the imbecile, Warren Wilhelm Jr, the lousy mayor who changed his name to Bill de Blasio in 2001.

De Blasio added “I’m sorry, that is not the same question as the understandably aggrieved store owner or the devout religious person who wants to go back to services,”  He didn’t clarify whether he was talking about all devout religious people or just the Jewish ones he’s been trashing since the lockdown began.

This is exactly what suppression of the First Amendment by an oppressive authoritarian state looks like, in case you were wondering. https://t.co/CTVMVzhV3n

Per deBlasio’s logic, congregating in crowds is bad—unless the crowd is breaking into stores and stealing all the product it was selling causing havoc and destroying people’s business.

Sorry Warren Wilhelm,  insinuating it’s perfectly okay to riot but and at the same time to break your own rules involving social-distancing during a pandemic because of 400 years of American racism is Guinness Book of World Records-level stupid

None of these looting thugs many of whom are white have experienced slavery  But the former Mr. Wilhelm seems to think the rioting thugs have the right to destroy other people’s lives just because of his white guilt.

“This is something that’s not about which side of the spectrum you’re on. it’s about a deep, deep American crisis. We have never seen anything quite like what we’ve seen in the last few days. This is a powerful, painful, historical moment.”

What side of the spectrum? Is he talking about Autism?

Hey Mayor, maybe they don’t notice because they were pissed off when they realized the bars were closed.

My god, he’s judging it based on what he thinks of the people involved! “Bill de Blasio defends ongoing lockdown: Protesting and going to church 'not the same’” https://t.co/Jn6N5pxz7Y

This is the same man who issued “final warnings” to Jewish people if they dared to conduct public gatherings against his rules during the crisis. He wrote on Twitter just over a month ago:

My message to the Jewish community, and all communities, is this simple: the time for warnings has passed. I have instructed the NYPD to proceed immediately to summons or even arrest those who gather in large groups. This is about stopping this disease and saving lives. Period.

One group of young Jews found a way around it.

These clever Hasidic kids decided to turn their carnival into a "Justice for George Floyd" rally and now the NYPD cannot break it up.

Tonight's Justice for George Floyd Shabbat Services are sure to be interesting as well.

But if it was about stopping this disease and saving lives, why does he seem to be okay with the looters?. Maybe his message to the Jewish community is really about…you know… well…Warren Wilhelm—that’s a very German name, isn’t it?

This time it’s about people of all faiths. De Blasio once described himself as an advocate for Democratic Socialism. Remember that Marx called the “opiate of the masses” –that’s Karl Marx. Groucho explained that when you “cross an insomniac, an agnostic, and a dyslexic” you get “someone who stays up all night wondering if there is a Dog.”

De Blasio’s statement about rioters versus people of faith isn’t really about a “deep, deep American crisis,” or his political distaste for people who are devout followers of a religion.  De Blasio’s strange comments about the riots versus people of faith may best be described by a different Groucho Marx quote, “He may look like an idiot and talk like an idiot but don’t let that fool you. He really is an idiot.”