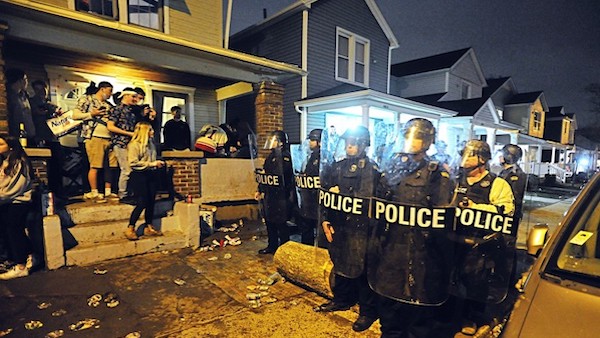 Boy, how things have changed.  Remember when kids would put on their pajamas backward in the hopes it would lead to a snow day off from school? Not any more. Students at the University of Dayton in Ohio were so angry the school was going to close because of COVID-19, they rioted. Around 1,000 students at the University rioted after they were told to leave campus over the Wuhan virus outbreak. dayton students riot

Police in riot gear fired several rounds of paintball guns and pepper balls into the crowd. Units from across the city were also called in to help after verbal orders to disperse were ignored. University Officials said at least one person was hurt by a thrown bottle.

University officials also said the crowd dispersed after 2 a.m. It is not clear how many arrests were made. 2 News will bring you more information as soon as it becomes available.

University of Dayton officials said in a statement:

“A large disorderly crowd that grew to more than 1,000 people gathered on Lowes Street starting around 11 p.m., throwing objects and bottles in the street and at police, and jumping on cars. Police gave verbal orders to disperse which were ignored. Police initially launched pepper balls, which contain powder with an irritant that disperses quickly, that were unsuccessful in reducing the crowd size. About 2:15 a.m., UD police and additional Dayton police again gave orders to disperse and moved to clear the street, which was effective in dispersing the crowd quickly. At least one person was reportedly injured by a thrown bottle.”

Flyer News, the official page of the University of Dayton’s student-run publication, posted some video of the events.

UD students gathered in large crowds on Lowes Street in the South Student Neighborhood Tuesday night in reaction to the news that university housing would close Wednesday for most students due to the spread of the coronavirus. pic.twitter.com/82XL9uCR04

We have video of police officers shooting what appears to be non-lethal weapons at students. pic.twitter.com/kgSasTUtC6

According to WDTN, some of the students weren’t protesting the closure of the campus, they were outside celebrating the shutdown for what would effectively be the last party of the semester.  I guess that means there’s hope for kids who used to wear their pajamas backward.