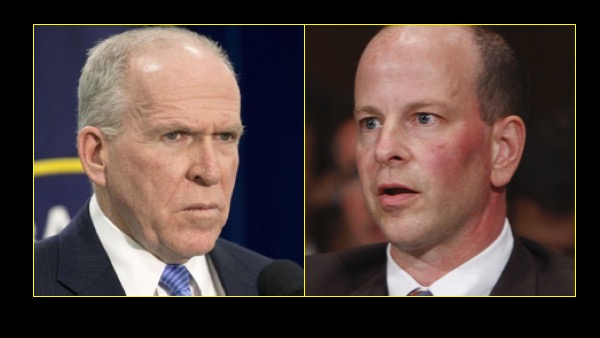 It has already been reported that Kris, who served as Assistant Attorney General for the National Security Division from 2009 to 2011, has been a vociferous critic of Devin Nunes in the last several years, and an equally vociferous defender of the FISA surveillance done on Carter Page (and through Page the entire Trump team).  Kris’s bias in favor of surveillance is well known.  Within the last two years, he has made the comments recounted by Chuck Ross of the Daily Caller News Foundation:

“It’s disturbing that Page met that legal standard and that there was probable cause to conclude he was a Russian agent,” Kris wrote in an essay March 1, 2018, at Lawfare, a blog operated by the Brookings Institution.

“The Nunes memo was dishonest. And if it is allowed to stand, we risk significant collateral damage to essential elements of our democracy,” wrote Kris, who is now a consultant at Culper Partners and frequent guest on MSNBC.

Kris went as far as entertaining the possibility, first proposed by Harvard law professor Laurence Tribe, that “Nunes might be prosecuted for obstruction of justice.”

Kris also wrote that the memo’s central claim that the FBI misled the FISC about Christopher Steele “was not true.”

In other words, Kris comes in already biased against the reality that has emerged from the Mueller investigation and the DOJ Inspector General’s report; specifically, that there was no probable cause to conclude Page was a Russian agent, but that the FBI withheld exculpatory information on Page from the FISA court, as well as withholding information about Christopher Steele that would have cast Steele’s credibility as a confidential source (and the dossier that bore his name) into doubt.

Other circumstances surrounding Kris might give us pause as well.  He is a writer for Lawfare, for example, and has penned articles jointly with Benjamin Wittes, the friend of James Comey, who “leaked” Comey’s memos on his meetings with President Trump to the media.

Kris was in the Harvard Law class of 1991, Barack Obama’s graduating class, and was a national security adviser to Hillary Clinton’s campaign in 2008.  He was on the Obama transition team after the 2008 election, and from that position received his DOJ appointment in 2009.

Those connections, Kris’s years at DOJ in the 1990s and early 2000s, his past affiliation with the Brookings Institution, and his founding of a D.C. consulting firm (Culper Partners LLC) could all make us wonder if it’s ever possible to not swamp-source an appointed position in Washington.

Granted, Kris is a recognized FISA expert, known in particular for a tome with the dry title National Security Investigations & Prosecutions, which he has authored in two editions so far with J. Douglas Wilson.

It’s important to highlight, however, that putting Kris in charge of FBI reforms is thus done implicitly on the premise that the gun-decked surveillance of the Trump team in 2016 was a “national security investigation,” as if national security was legitimately at issue in that episode.

The reality is that it wasn’t.  The problem, in this case, isn’t that there was a legitimate national security investigation attended by some faulty evidence packaging by the FBI.  The problem is that the FBI’s false packaging of evidence was meant to hide from the FISA court the fact that there was nothing that merited a national security investigation.

Evidence was faked – it wasn’t just forwarded to the court with a few Ts uncrossed.  It’s not an error we’re talking about; it’s gross dishonesty.

That’s a much different proposition.  What the FBI needs is not a process expert who’s manifestly in the tank for the original premise about a national security emergency.  The FBI needs a dust-buster to shake the organization until the mask of falsehood falls off.

David Kris isn’t at all likely to fill that role.  We may note one more thing about him before moving on to the Brennan connection. In 2006, after leaving government service in 2003, he put out a lengthy brief against the Bush administration’s use in its counterterrorism operations of so-called “warrantless wiretapping” (which was actually not wiretapping but communications-retrieval surveillance. The same kind we’ve been talking about with the Carter Page surveillance and the rampant, analyst-level unmasking during the Obama administration).

I was extremely critical of that “warrantless” practice myself, so the point here is not that Kris was wrong to offer a brief against it.  But there is an interesting contrast between his passionate opposition to the Bush administration adopting shortcuts in going after known terrorists, and his passionate defense of the Obama administration obfuscating before the FISA court its use of political opposition research to manufacture a groundless case against Carter Page. 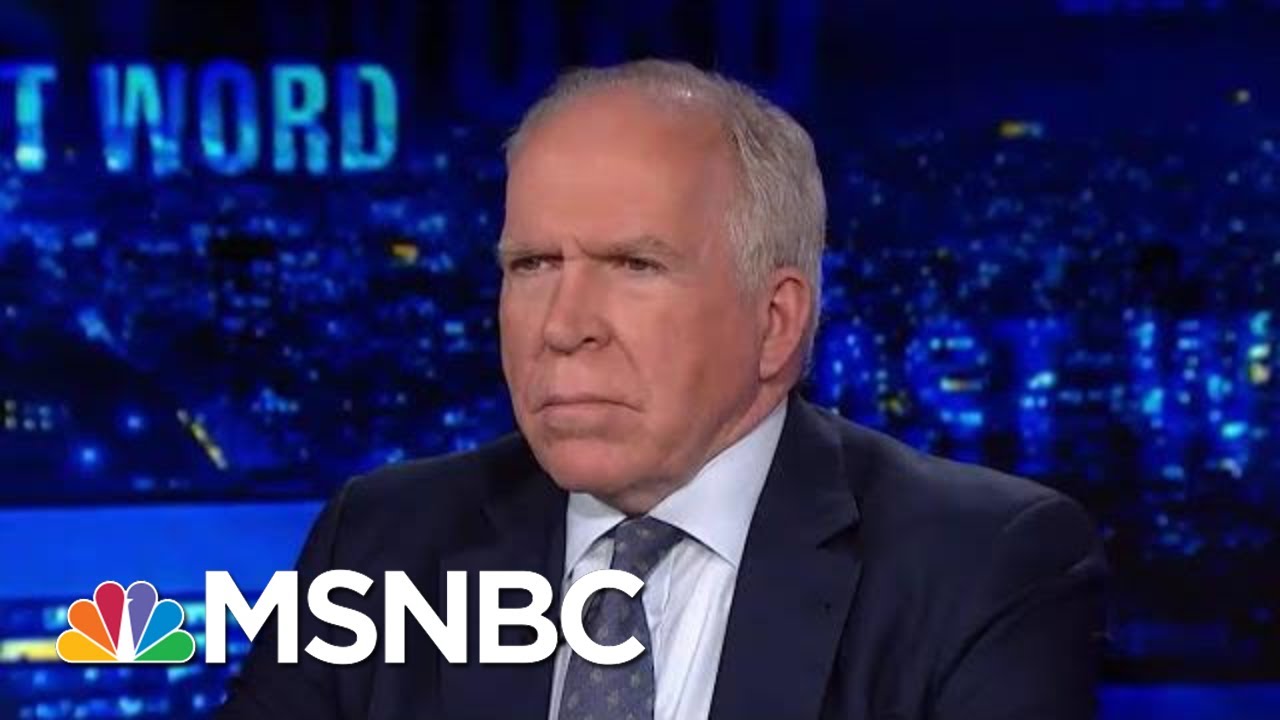 That contrast can’t help coming across as political rather than based on antiseptic principle.  We now come to the link with John Brennan.

Exhibit A in this segment, is the weakest card.  But it will look stronger in a few minutes after other information is added.  To set up Exhibit A, we note that Brennan was Obama’s Homeland Security and Counterterrorism “czar” during the period when David Kris was head of the National Security Division (NSD) at the DOJ; i.e., 2009-2011.

We’ll see in a moment that the two officials – as we would expect – did work several issues together at the time.  Something to keep in mind is that most of what the DOJ NSD did after it was created in 2006 was focused on counterterrorism.

So it is interesting to view Exhibit A, for the clubbiness it evokes surrounding a particular corner of the national security and national intelligence world to which both men belonged.  It’s the client list for a consulting firm run by another former national security official, Nick Shapiro.  On his LinkedIn page, Mr. Shapiro has a shortlist of clients who apparently have authorized him to use their names, and Brennan and Kris are both in it, along with other familiar names like Michael Morell and Lisa Monaco. 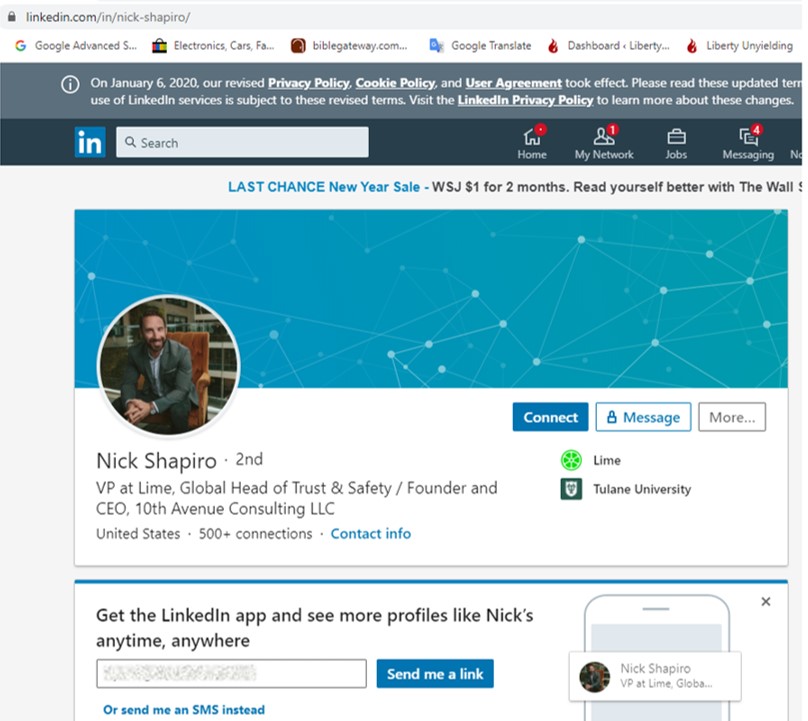 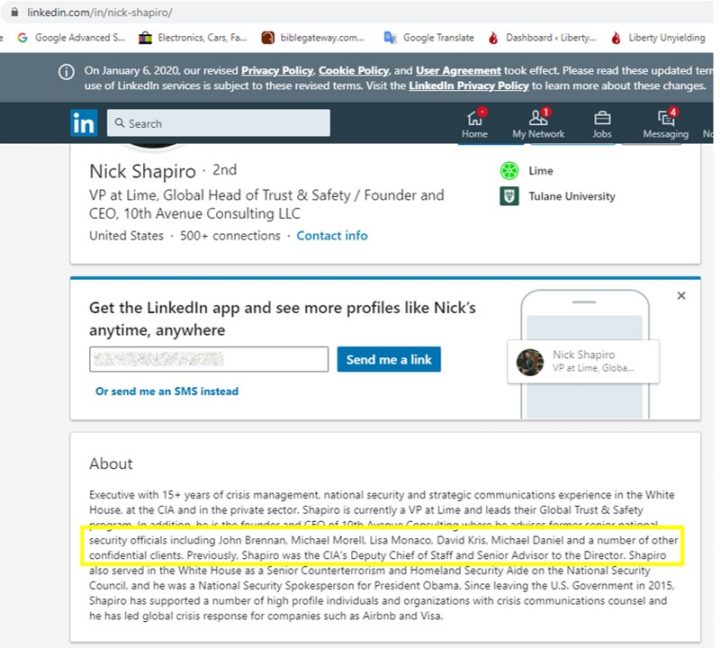 Shapiro basically followed Brennan around Washington from 2009 to 2015, working for him at the White House and then at the CIA. 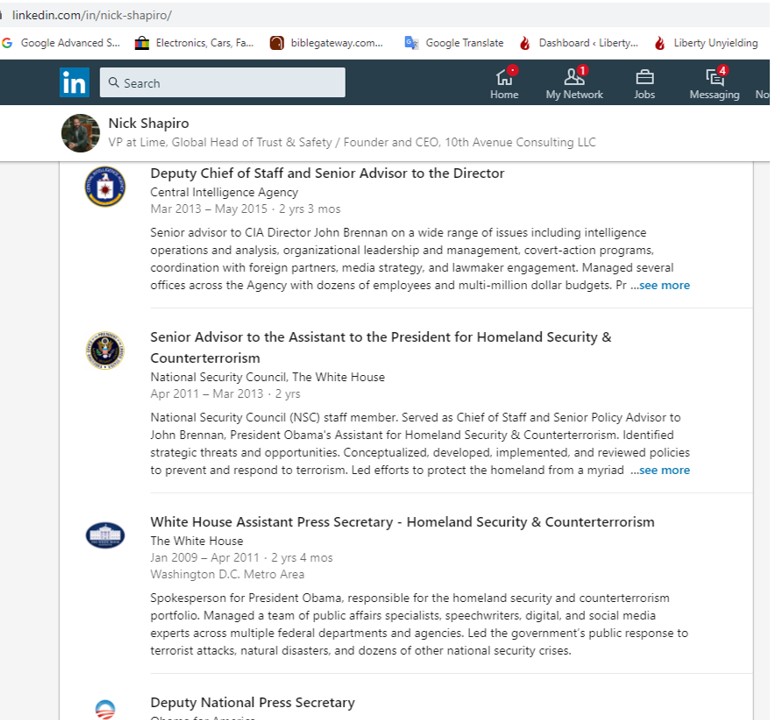 Kris is the opposite of an outsider in the “swamp.”

Exhibit B is a pair of two letters of recommendation David Kris signed for Brennan’s confirmation process in the Senate when Obama nominated Brennan to be the CIA Director in 2013.  (Scroll to pp. 8-10 of the 181 pages reflected on the PDF document banner.)

It’s of interest here not only that Kris was involved in recommending Brennan, but that he was a signatory on two different letters.  One was authored by eight individuals, of which Kris was one.  The seven other signatories included Jeh Johnson, Greg Craig, Daniel Meltzer, and Sarah Cleveland, just to list the names readers may be most familiar with.

The other letter was sent by Kris himself and signed only by him. 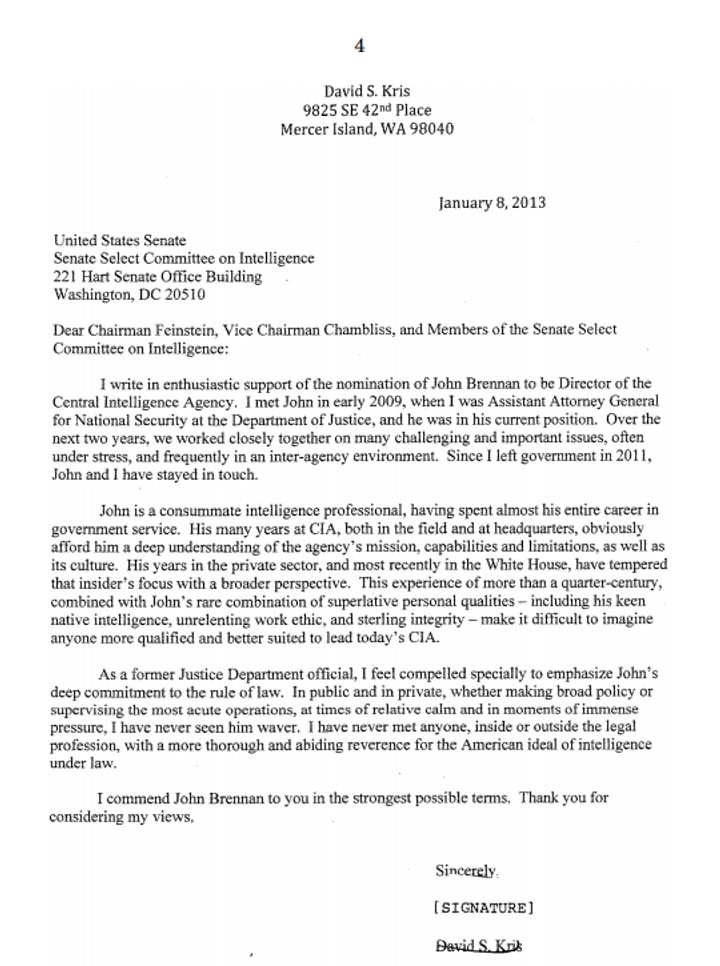 As seen in the screencap, Kris wrote:

I met John in early 2009, when I was Assistant Attorney General for National Security at the Department of Justice, and he was in his current position [i.e., special adviser to the president, or counterterrorism “czar”].  Over the next two years we worked closely together on many challenging and important issues, often under stress, and frequently in an interagency environment.  Since I left government in 2011, John and I have stayed in touch.

Thus, Kris characterizes their working relationship as a close one.  And one of the most significant cases they worked, and the one with perhaps the most lasting implications, was that of the infamous “underwear bomber,” Umar Farouk Abdulmutallab, who tried to detonate an explosive device aboard an airliner bound for Detroit in December 2009.

I wrote two articles about that case in 2019 (here and here) because it was the catalyst for a significant change under Obama in federal agencies’ sharing of data gathered under FISA authorization.  John Brennan spearheaded the interagency campaign to make that change in data-sharing (which involved the FBI and the National Counterterrorism Center, or NCTC).  As elaborated at the links, Brennan had also, from 2005 to 2008, been the president of a government contracting firm, The Analysis Corporation (TAC), which obtained contracts to manage and analyze the selfsame data at both the FBI and the NCTC.

The other players in the effort to affect the rule change were officials Kris knew well and worked with at the time:  Michael Leiter, who was head of the NCTC, and Matthew Olsen, Kris’s immediate predecessor as Assistant AG for National Security (2006-2009).  When Kris took over, Olsen moved to NSA to become general counsel and work “all the legal angles of security and privacy issues with electronic surveillance, and in particular … access to that information for other government agencies – including access by contractors.”

Olsen and Kris between them had just the complementary sets of expertise needed for Brennan’s project to change the data-sharing rules – which required getting the approval of the FISA court since the rules were about sharing FISA-authorized data.  Kris left his DOJ job before the rule change was effected in 2012. But what’s of interest is that, as a FISA expert and national security official, he was involved with Brennan and the other major figures in the case and deliberations that produced that rule change.

As recounted at the 2019 Liberty Unyielding articles, the 2012 rule change appears to have been a vital component of the dramatic increase between 2013 and 2016 in the “back-door” unmasking of U.S. persons, which included contractors gaining access to the unmasked information.  And that trend, in turn, became the alarming development NSA Director Michael Rogers reported to the FISA court in October 2016 – after cutting off analyst access to the information via data-retrieval queries several months before, in April 2016.

The significance of this is not that David Kris was necessarily involved in setting up back-door access to surveillance data or opening a valve wider to sharing it.  That isn’t established.  It is, instead, that if John Brennan and others who were involved in the 2012 rule change wanted a friendly expert appointed to reform the FBI’s FISA authorization practices, Kris would probably be just about their first choice.  Kris was one of Brennan’s most prominent supporters when President Trump announced he would revoke Brennan’s security clearance back in 2018.  What are the odds that Kris and Brennan have continued to stay in touch, and that Brennan will have better information about what’s going on with the FBI’s reform project than the FISA court itself?

It never fails.  You can’t make this stuff up.