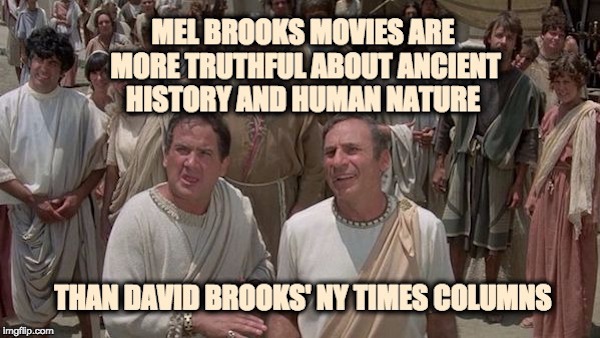 Now and then you run into a composition so pervasively, comprehensively wrongheaded that it would take all week to parse and address it all.

In 2017, “now and then” has become “just about every day.”  No one has the time to deal with all of it.  But David Brooks, bless his heart, has perpetrated another op-ed that cries out for a good countering.  Its invalidity is down to nearly the sub-atomic level – and yet it is perfectly representative of the self-satisfied, bromide-based mindset of today’s West.  It’s a superb vehicle for highlighting what’s wrong with the post-modern Western idea.

That idea arose, irrationally (or at least unrealistically), from an older, well-formed and hard-won canon of more sensible Western thought.  It’s as though the West sought empirical truth and wisdom for many centuries, cobbled some together, and then suddenly decided to take a flyer on insistent illusion.  (Many of you have a theory on why that is.  I do too, but it’s still worth going through this analysis.)

In the op-ed Brooks cites, written by H.R. McMaster and Trump aide Gary Cohn, the authors state a partial proposition from the older Western canon:

The president embarked on his first foreign trip with a cleareyed outlook that the world is not a ‘global community’ but an arena where nations, nongovernmental actors and businesses engage and compete for advantage.

Brooks is beside himself, but there’s nothing unthinkable about this statement.  Nor is it a gloomy, Hobbesian assertion.  Nations and businesses are understood to have specialized functions and operate in certain ways to fill their roles; they are not expected to behave the way churches, charities, and community groups do.  If nations behaved like churches, or if charities behaved like businesses, we would all be unable to sleep at night.  Life would consist of sitting on the roof with a shotgun to protect our meager belongings from predators, until we died an early and unpleasant death.

It’s precisely because we have something that behaves like a “nation,” and another thing that behaves like a “business,” that we have protected territory in which to realize peaceful, provident prosperity.  The West used to know this.  We have the conditions for community cooperation – we have the trust-bound basis for it – because of the network of philosophical and practical respect we’ve developed for life and property, which are most effectively protected by nation-states, and which accomplish an indispensable, synergistic “most” through business enterprises.

The expansion of good life that the West has excelled at for centuries is because we do have nations and businesses, part of whose charter is to compete as well as engage.  It’s never been because we didn’t have them, or because something not based on them came to supersede them.

Wherever they have not existed, the people without their unique capabilities have lived either in oppressive empires, or in conditions of tribal warfare and hand-to-mouth poverty, falling easy prey to imperial powers.  If you look, you’ll see that very dynamic unfolding in the Middle East as the now-notorious “Sykes-Picot” arrangement of a century ago falls apart.  It has persisted in Africa and parts of Asia to this day.

Brooks deals with the McMaster and Cohn assertion this way:

That sentence is the epitome of the Trump project.  It asserts that selfishness is the sole driver of human affairs. It grows out of a worldview that life is a competitive struggle for gain. It implies that cooperative communities are hypocritical covers for the selfish jockeying underneath.

We may not all be Marxists now, but Brooks certainly is one.  For the rest of us Westerners, recognizing the importance of competition in no way implies that selfishness rules, or that cooperation is hypocrisy.

It has been the project of the West to build men and women who can personally master the synthesis involved, and act from initiative, rather than placing all human affairs rigidly under a stifling, institutional hierarchy of prescribed functions.

A little further down (we won’t take this sentence by sentence, or we’d be here all day), Brooks says this:

The [McMaster-Cohn] essay explains why the Trump people are suspicious of any cooperative global arrangement, like NATO and the various trade agreements.

The elliptical garbling of the key adjective here is so characteristic.  “Global,” Brooks calls it: NATO, and “various trade agreements.”  But NATO is not global.  NATO is regional and specific.  It’s a military alliance, a treaty organization entered by individual nations – and only making sense because they are individual nations, whose purpose for the alliance is to maintain themselves in that condition.  It’s not a “cooperative global arrangement.”  It’s the antithesis of one.

Trade agreements are regional (or bilateral, between nations) as well.  Where the UN (nominally) sponsors an agreement on principles of trade, the nature of the arrangement is globalist, meaning it aspires to have a global effect and global buy-in.

But even that doesn’t make it “global” in Brooks’ sense of community volunteerism and the urge to cooperate.  The GATT and WTO would never have seen the light of day if they had had to arise as a “global community” effort.  We have them because the United States aggressively sponsored them in the decades after World War II.

Brooks goes on to argue at length that the Trump team is abandoning morality for power, selfishness, dirty-minded realism, etc., etc.  It is clear that Brooks simply can’t handle the idea of needing to wield power or competition to promote interests that are morally good.  He’s apparently convinced that if you’re reverting to power and competition at all, your behavior is inherently immoral.

This is not a classical Western view.  In fact, it is (I am sorry to have to say) an unformed, juvenile view.  The classical Western perspective is that wisdom lies in bridging the tension between solidarity, love, moral fulfillment – things Brooks rightly identifies as powerful motivators for men – and the need for asserting rights and establishing boundaries, which require enforcement and paying for.

The tension is there, no doubt.  But the grown-up perspective is that accumulated wisdom and judgment enable us to face it squarely and administer it.  Solidarity and love need protection in this world.  They don’t protect themselves.

Children insist that rights and boundaries can be devalued, in a zero-sum competition with solidarity and love.  The post-modern West seems determined to act that child’s part, as if we had no cultural legacy of systematic thinking on how to act the grown-up’s part in a morally defensible way.

Just a few more points on Brooks’ unfortunate essay.  He states this:

People are wired to cooperate. Far from being a flimsy thing, the desire for cooperation is the primary human evolutionary advantage we have over the other animals.

Well, sort of.  All kinds of animals cooperate.  They have an instinct for it, as opposed to a human-type desire.  Humans have instinctual urges for cooperation as well; the real difference is that for us, cooperation is a moral choice, for which there are alternatives.

But nothing in Trump’s worldview precludes cooperation anyway.  Brooks sets up a lot of straw men like this, to avoid acknowledging what the West has deemed for many centuries to be valid: that cooperation and competition necessarily work together.

Brooks makes this assertion too:

By treating the world simply as an arena for competitive advantage, Trump, McMaster and Cohn sever relationships, destroy reciprocity, erode trust and eviscerate the sense of sympathy, friendship and loyalty that all nations need when times get tough.

Of course, the Trump team is not merely treating the world as an arena for competitive advantage.

But it’s an awfully big point that sympathy, friendship, and loyalty aren’t nearly as important to other nations in their toughest times as firepower and money.  A hundred nations may offer France sympathy after she’s been invaded by Hitler, but the real trick is to kick Hitler back out – and that takes armies, warplanes, and warships, wielded by one or a few nations with unified will.

Global communities are very good at talking us out of these capabilities, and have no capacity to rescue us when the capabilities aren’t there to call on.  Decades of UN interventions have demonstrated that.

Ultimately, Brooks’ fundamental misconception is that the Trump/McMaster/Cohn view is a disembodied statement of stark, one-sided priorities.  It’s clearly not.  The McMaster-Cohn op-ed is an extended statement of its very first proposition: that the world is not a “global community.”

McMaster and Cohn go on to articulate what they think it is instead, but the real point is the original one.  Its implication is that the Trump administration intends to behave like a nation-state and not like a Rotarian trying incongruously to persuade ISIS to stop massacring innocents, or his fellow Rotarians to lay down their nuclear weapons.

This ultimate point is best illuminated by inspecting Brooks’ regrettable foray into historical allusion in the final passage:

I wish H. R. McMaster was a better student of Thucydides. He’d know that the Athenians adopted the same amoral tone he embraces: “The strong do what they can and the weak suffer what they must.” The Athenians ended up making endless enemies and destroying their own empire.

If Brooks were a better student of Thucydides, he’d know that stating this axiom (which Thucydides has them do to the Melians, in the Melian dialogue) was in no way distinctive for the Athenian mindset.  The running proposition of Thucydides’ Peloponnesian War is that the Athenian statement, like many other such axioms, is a standard form of realistic observation, common to the men of the Greek West when he wrote his history.  The Athenians, in his treatment, deployed it in a negotiation.

But the Athenians were actually the notable relationship-builders and cooperators of Thucydides’ narrative, both within the Greek alliance and without.  That was how they – with some of the smallest territory on the Balkan Peninsula – became culturally dominant and achieved economic and political power.  They were open to systematizing “international” cooperation in a way Sparta was not; they took chances on outreach as part of both commerce and their “national” political life.

There is much that is poignant in the trajectory of ancient Athens, but their story, fully told, is by no means one of “making endless enemies and destroying their own empire.”  It was more the opposite.  Athens was quite accomplished at punching above its weight by leveraging cooperation.  (The Thucydides narrative is in any case only a brief slice of the history of ancient Athens, which was eventually eclipsed by Rome more than it was destroyed, per se.  Its cultural influence and stamp on the region continued long past its apex of political and military power.)

The political Athens of Thucydides resonates across the centuries as more like what the modern nations of the West wrestle with than the trials of any other polity described in The History of the Peloponnesian War.  The Athenians, of all the actors in that drama, would have recognized the political patterns of today’s West, and been neither confused nor alarmed.  There are “Greeks,” and have been for more than two millennia, because of Athens.  Far from living in crude, one-sided selfishness, the Athenians pioneered the Western concept of synthesizing the necessary and the good, and teaching men to appreciate and master both.

They didn’t always do it well.  But their concept for doing it – a major element of our cultural heritage – lives on.  It seems to be a sign of our times that for an op-ed writer for the New York Times, no arrangements of our culture have conspired to ensure he understands that.