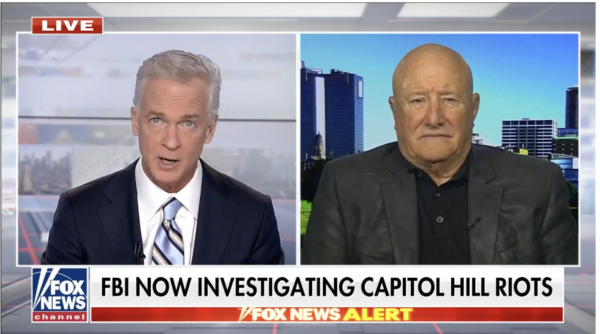 One of the biggest questions that still remain after the storming of the US Capitol on Wednesday is how exactly the incident was allowed to occur and how will they catch the organizers and participants who got away.  Former FBI Deputy Assistant Director Danny Coulson explained how that will happen.

Capitol Police were overwhelmed by protesters, with crowds estimated to have been in the tens of thousands at one point.  A small number of these demonstrators turned violent, smashing windows and doors.  Coulson explained that the Capitol is an almost impossible building to protect.

I worked on the Hill for a number of years for the FBI. That place is a sieve. There [are] way too many entrances. It is supposed to be the people’s house, not a fortress. Now, we have a changing civilization and they need to close down … I know the Capitol police are taking a lot of hits. They protected those members. They didn’t protect the building, but a lot of members up there who are very fragile and had they confronted these rioters think of the injuries that would have occurred. They acted valiantly. Not well prepared, but acted with heroism, as far as I’m concerned.

Now the FBI is asking the public to help them identify those who committed the act, but one former agent is fairly sure that the Secret Service already has all they need.

While it may seem next to impossible to find those that caused the mayhem, Coulson said that there are plenty of ways that justice will be served.

“First of all, cameras. There are cameras all over the place,”  he said. “Also, remember that those police officers that were attacked, they had body cameras on…FBI and Secret Service and other institutions have very good facial recognition ability and they captured all that stuff,” he added. “It all becomes digitized.”

And there was more…

He urged that in the coming days and weeks, law enforcement agencies will have plenty of information.
“The FBI will see if other people were involved in other riots. There is a possibility. There is a culture in this country, people go from riot to riot,” he said. “They will have the cell phones of the people that got arrested. That’s going to be a treasure trove of information.”

A theory circulating among some conspiracists that Antifa and other far-left groups were working to encourage the violence from inside the pro-Trump crowd.  Should the Secret Service truly have the evidence that Coulson says they have the truth and it will likely be available within the week.

A video of the interview with Coulson follows: