Chief Of Campus Police Force Put On Leave For Being Conservative 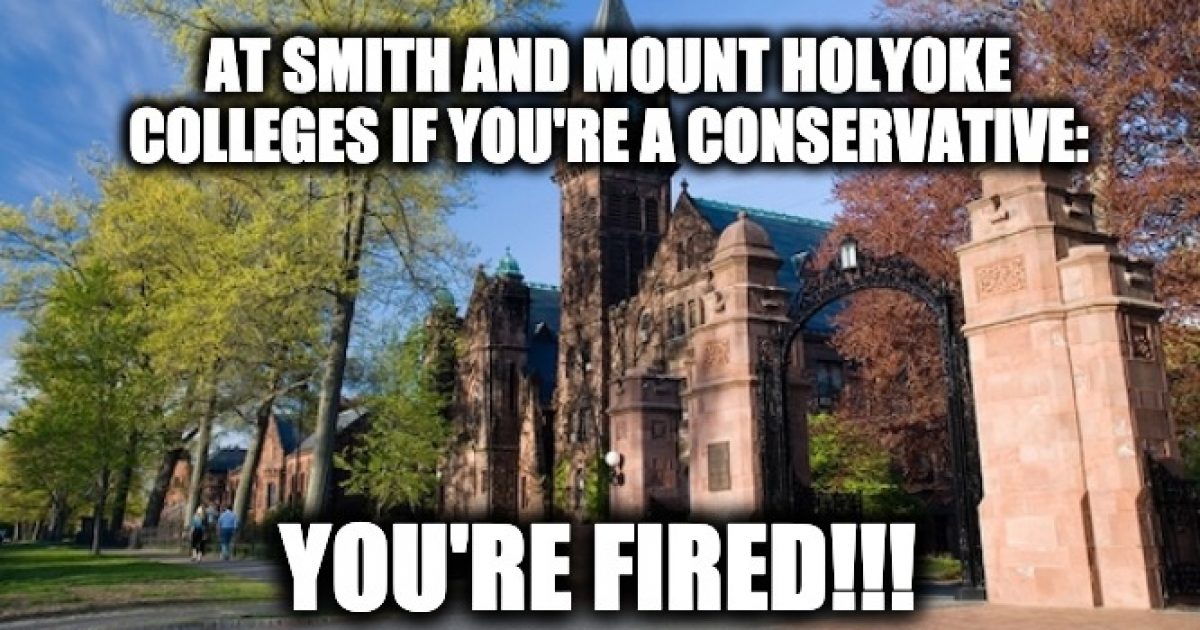 This is a perfect example of the decline of American education. The recently hired campus chief of police for the joint police forces for Smith and Mount Holyoke Colleges, Daniel Hect was put on leave for being a conservative. Both schools are all-female liberal arts colleges (the emphasis is on the liberal)

Based on the email Kathleen McCartney the President of Smith sent to the campus community Mr. Hect’s leave will be permanent.

On April 10th Smith college held an Inclusion and Diversity Conference for students to attend instead of classes. The Conference turned into a protest against Hect.

Per the Hampshire Gazette;

“We are just fed up,” sophomore Julieta, an organizer who declined to give her last name because of her immigration status, said ahead of the rally.

The rally was organized by the group Students for Social Justice and Institutional Change, or SSJIC. Originally formed to organize for the rights of undocumented students, SSJIC has expanded to a coalition that includes other students of color and low-income students.

The coalition presented a list of 28 demands to Smith’s administration, including specific demands from undocumented students, students of color, low-income and trans students. Among their demands to Smith: hiring a mental health professional trained to help undocumented students, expanding the college’s “affinity housing” pilot program to include a house specifically for black students, providing free laundry and menstrual hygiene products for all students, and changing the admissions policies “to officially recognize and welcome all transgender students. [and the crunchy Cheetos?]

Julieta, the illegal immigrant/ organizer of the sit-in, was upset about Hect because:

Hect never called her an illegal, but because he is a conservative and a supporter of Trump Julieta assumed that’s what he thinks. It would, however, be an accurate thought because Julieta is illegal.

Both schools claim that that Hect’s leave had nothing to do with politics.  However, those who believe that probably also believe in the tooth fairy, unicorns, monsters under the bed, and the Brooklyn Bridge is for sale.

Apparently, the next generation (nor their educators) believes a person does not have a right to support a candidate of their choice. https://t.co/G6w1Ckysry

The campus chief of police at Mount Holyoke College has been placed on leave after students confronted him about supporting President Trump.

Last month, members of the Mount Holyoke administration held a forum for students to engage with the newly hired chief of campus police. The Mount Holyoke News reports that students questioned Hect about his personal views amid “tension and tears.”

Students dug up tweets from Chief Daniel Hect which showed he thinks favorably of Trump, likes the National Rifle Association, and supports a Mexican border wall.

Actually, they weren’t his tweets, but the students complained about tweets they say Hect previously had “liked” on Twitter, including one instructing President Donald Trump to “BUILD THAT WALL!” and another in which the National Rifle Association wishes people a Merry Christmas. Hect’s Twitter profile has since been deleted.

The snowflakes felt “threatened” by a liked Trump tweet. I never thought I would live to see the day an American could get fired for supporting the sitting president.

This is utterly ridiculous. ⁦@MountHolyoke⁩ has put the man in charge of campus security on administrative leave for no valid reason. I hope he has a good attorney as this is getting way out of hand. https://t.co/2KMIm50uoi

?The campus chief of police at Mount Holyoke College has been placed on leave after students confronted him about supporting Trump.
Students dug up tweets from Chief Daniel Hect which showed he thinks favorably of Trump, likes the NRA & supports the wall.https://t.co/ItNhmAqcRY

So to put things more concisely Chief Hect was suspended for supporting the President, the Constitution, and border security. HOW DARE HE live his life as a patriot!

The purpose of college is to prepare students for the real world.  But Smith and Mount Holyoke prepare kids for a world where everyone thinks the same way, making individual thought unnecessary.  Parents should avoid sending their daughters to either of those schools, they graduate thoughtless zombies.