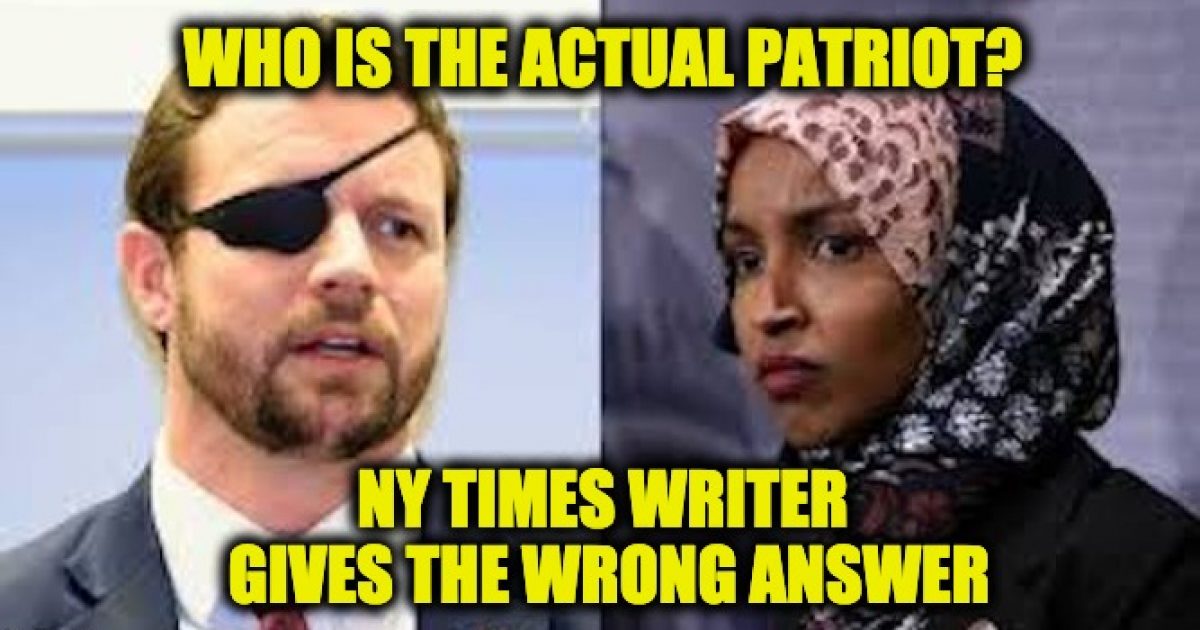 Ali, who was once named to CNN’s ‘Most Influential American Muslims’ list, jumped at the chance to prop up Rep. Ilhan Omar while simultaneously blasting Crenshaw’s patriotism.

The so-called journalist was responding to comedian Jon Stewart’s viral reaction to members of Congress for not supporting a victims’ compensation fund set up for first responders after the 9/11 attacks.

The number of lawmakers at a hearing over the issue led Stewart to excoriate them as “an embarrassment to the country” and said their lack of concern “is a stain on this institution [Congress].”

Ali decided to brag about Omar’s support for the compensation fund while slamming Crenshaw for not being a co-sponsor. Which, as any decent journalist with the gumption to research facts before making accusations would know, was completely false. In a tweet, he has since deleted Wajahat Ali wrote:

“Anytime a Republican says they are ‘patriots’ ask them if they voted to fund the 9/11 Victims Compensation Fund. You know who’s for it? Ilhan Omar. You know who hasn’t sponsored it? Dan Crenshaw. @DanCrenshawTX, I hope you do the right thing. If not, why aren’t you?”

It took all of a few minutes for followers on social media to point out that Ali was flat-out lying or didn’t know how to look up (or read) congressional bills.

Why did you lie about something that's so LAUGHABLY easy to check?https://t.co/vldXipg13z pic.twitter.com/CRMBkyFEzJ

Not to mention, did this guy seriously just question Crenshaw’s patriotism while holding up Omar, a radical anti-American Democrat by any reasonable measure, as a real example of such?

The same Rep. Omar (D-Mn), who attacked the U.S. soldiers who died fighting in the Battle of Mogadishu the ‘black hawk down’ operation patriotic? Is he really talking about the woman who described the 9/11 terrorist attacks as “some people did something, the same woman who spent most of Memorial Day weekend talking to an organization tied to the Muslim Brotherhood, instead of honoring the Americans who died fighting to protect this country? That doesn’t sound very patriotic to me/

Crenshaw refused to take the NY Times’ writer insult laying down, taunting Ali by putting the word ‘journalist’ in quotes and advising him in the future to “check your facts.”

He chided him by saying the word ‘patriotism’ as well, posting an image of a brain scan of the injury he sustained while fighting terrorists overseas. You know, when he lost his eye during his third tour of duty in Afghanistan, and still went back for two more tours?

Hey “journalist,” maybe you should check your facts. I am a co-sponsor. Nice try though.

Rather than admit his mistake, Ali did what most of the mainstream media does – he issued a non-apology and demanded Crenshaw actually apologize to Omar for blasting her previous comments on 9/11, in which she claimed “some people did something” that day.

Rep. Crenshaw’s reaction had more class than mine would have been.

1. I never called you un-American.

2. I did not incite any violence against you.

3. You described an act of terrorism on American soil that killed thousands of innocent lives as “some people did something.”

It’s still unbelievable, as is your response here. https://t.co/SsfWYepOS1

Obviously, Ali believed her bogus response because his response to Crenshaw’s pointing out of the truth about his support of the 9/11 victims compensation was a defense of Rep. Omar:

Thanks for letting me know. I’m glad you did and I have no problem correcting and updating the record with facts. Now try it with your comments about Ilhan Omar. You’ll feel better. Sincerely, a fellow patriot. https://t.co/6bAsYBpxsY

I guarantee that if Wajahat Ali needed a true patriot to protect him in a time of need, he would call Rep. Dan Crenshaw long before Rep Ilhan Omar even came to mind.

Dan Crenshaw is a true American hero, and by questioning Crenshaw’s patriotism while lauding that of Omar’s, Ali ended up thoroughly and deservedly embarrassed.