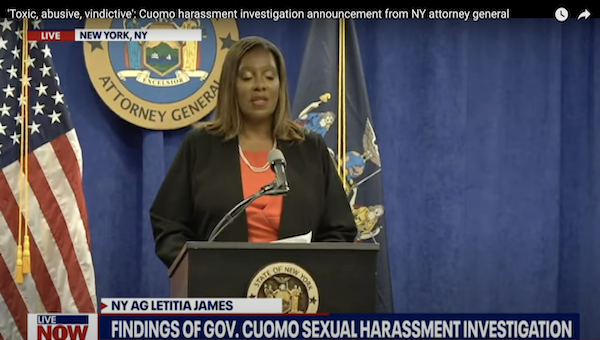 Devastating! A report issued by NY State Attorney General Tish James substantiated allegations that NY Gov. Andrew Cuomo committed several acts of sexual harassment that violated federal and state laws.  The report, released after a five-month investigation, concluded that the accusations of eleven different women, many former or current state employees, were credible (full report embedded below).  Not only did it demonstrate harassment, but the report includes his attempts at revenge. The report was not based on the claims of the victims, it was based on interviews of 179 people including Cuomo.

At the press conference announcing the report, independent investigating attorneys Anne Clark and Joon Kim shared some of the horror stories. But no charges were filed as AG claimed it was mostly a civil matter, and it was up to local authorities to bring up charges.

“The investigation has concluded that Gov. Andrew Cuomo sexually harassed multiple women and, in doing so, violated federal and state law. Specifically, the investigation found that Gov. Andrew Cuomo sexually harassed current and former New York state employees by engaging in unwelcome and non-consensual touching and making numerous offensive comments of a suggestive and sexual nature that created a hostile work environment for women.”

Investigator Clark told the story of one assistant who said Cuomo groped her against her will in the governor’s mansion.

“On Nov. 16, 2020, in the executive mansion, the governor hugged executive assistant No. 1 and reached under her blouse to grab her breast. This was the culmination of a pattern of inappropriate sexual conduct, including numerous close and intimate hugs, where the governor held her so closely that her breasts were pressed against her body. And he sometimes ran his hands up and down her back while he did so.”

“There were also several occasions where the governor grabbed her butt. Executive assistant No. 1 had vowed that she was going to take these violations, as she put it, ‘to the grave.’ She was terrified that if she spoke out she would lose her job. But she broke down in front of colleagues when she heard the governor on March 3rd, 2021, in his press conference claim that he had never touched anyone inappropriately.”

The report even reports the story of a state police member who was on Cuomo’s protective detail who was touched by the governor, running his finger down her back and chest.

And there were attempts at revenge. Per the report:

This is a breaking story and will be updated. NY Senators Schumer and Gillibrand have already called for Cuomo to resign. There will be others (including Cuomo in 2013)

There should be a zero tolerance policy when it comes to sexual harassment & must send a clear message that this behavior is not tolerated.

Below is the press conference of AG James and the investigators and the full sexual harassment report.